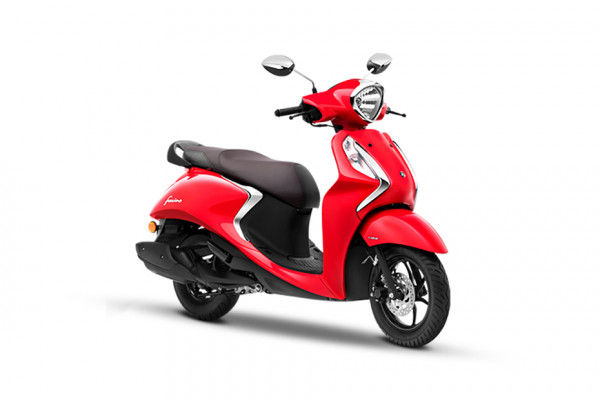 The Yamaha Fascino is the Japanese brand’s best-selling scooter in the country. One of the USPs of the scooter is its Vespa-inspired styling. In December 2019, Yamaha launched the bigger-engined brother of the Fascino BS4, called the Fascino 125 FI. This BS6-compliant scooter is priced at Rs 67,230 (ex-showroom Delhi) for the base drum brake-equipped variant. Read more about the scooter in our launch story here.

The Yamaha Fascino 125 FI draws power from a 125cc single-cylinder air-cooled fuel-injected BS6-compliant engine. It produces 8.2PS at 6500rpm and 9.7Nm at 5000rpm. The motor works alongside a variomatic transmission. Yamaha claims the engine offers 16 per cent better mileage than the Fascino BS4. The Yamaha Fascino 125 FI employs a telescopic front fork and a single shock absorber at the rear. For braking, it uses either a 190mm disc up front or a drum unit, along with a drum at the rear, with CBS as standard. The 12-inch front and 10-inch rear alloy wheels are wrapped with 90-section front and 110-section rear tubeless tyres respectively. Interestingly, the scooter tips the scales at 99kg kerb, making it the lightest 125cc scooter on sale in India.

The Yamaha Fascino 125 FI is available in front drum and disc brake variants. The former costs Rs 67,230, whereas the latter will set you back by Rs 69,730, ex-showroom Delhi.

The design of the Yamaha Fascino 125 is similar to its 110cc sibling. The curvaceous panels look bigger in the Fascino 125 FI and the tail section looks noticeably longer. Yamaha has also pulled the handlebar closer to the rider by 18mm and it is 20mm higher as well. This should ensure comfortable ergonomics. The stubby exhaust shape is neatly masked by the curvy exhaust heat shield, which goes well with the overall theme of the scooter.

The Yamaha Fascino 125 FI comes with a Smart Motor Generator System, essentially a silent starter. It also comes with a Stop & Start system which automatically turns off the engine when idling in traffic for a while. The motor cranks up again as soon as the throttle is applied. Other notable features include an all-analogue instrument cluster, 21-litre underseat storage, side-stand engine cut-off function and an optional under seat USB charger. It would have been better if Yamaha had equipped the scooter with an LED headlamp, at least in the top-spec variant.

The Yamaha Fascino 125 FI rivals the Hero Destini 125 BS6, the Honda Activa 125 BS6 and the best-selling scooter in its segment, the Suzuki Access 125 BS6.

The mileage of Yamaha Fascino 125 is 66 kmpl. This is the claimed ARAI mileage for all the variants of Fascino 125 .
View User Reported Mileage