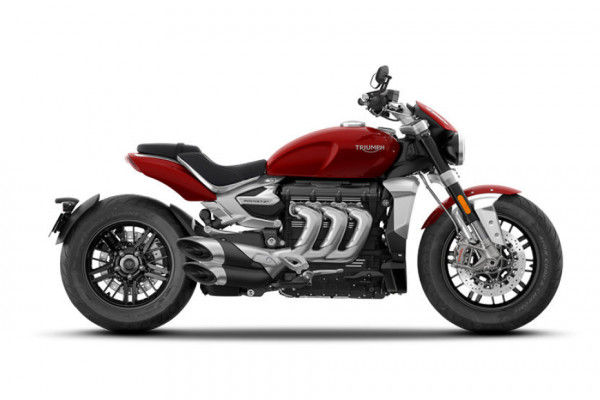 Triumph Rocket 3 R is a cruiser bike launched at a base price of Rs. 18.00 lakh in December 2019 by Triumph in India. Rocket 3 R is powered by 2458cc engine. Rocket 3 R has a inline 3-cylinder, water-cooled, dohc engine and a 6 speed gear box. Triumph Rocket 3 R comes with disc breaks in front and rear with a support of ABS. It is available in 2 colours.

Triumph has commenced deliveries of its Rocket 3 R roadster in India. The Rocket 3 was launched in December 2019 and within a month, the British bikemaker has sold out the first batch of 40 units of the motorcycle. Bookings for the second batch are open with deliveries scheduled for February- March.

The all-new Triumph Rocket 3 R costs Rs 18 lakh (ex-showroom India) and is available in two colours: red and black. There are no natural rivals for this performance cruiser but the Ducati Diavel 1260 and the Harley-Davidson Fat Bob come close.

The motorcycle is powered by a 2500cc inline three-cylinder liquid-cooled engine, which produces 167PS and 221Nm. It is mated to a 6-speed transmission linked to a final shaft drive. There are multiple electronic aids like four rider modes, cornering ABS, traction control and even hill-hold control as standard.

The engine nestles inside a new lighter aluminium frame, and the suspension bits include an inverted front fork and a monoshock -- both fully adjustable from Showa. Anchorage is via twin 320mm discs with Brembo Stylema calipers and a 300mm disc at the rear.