If there’s one bike that can turn as many heads if not more than the Bonneville is the Thruxton café racer. We travelled all the way to Portugal to ride the new Thruxton R and all we can say is, the icon is back 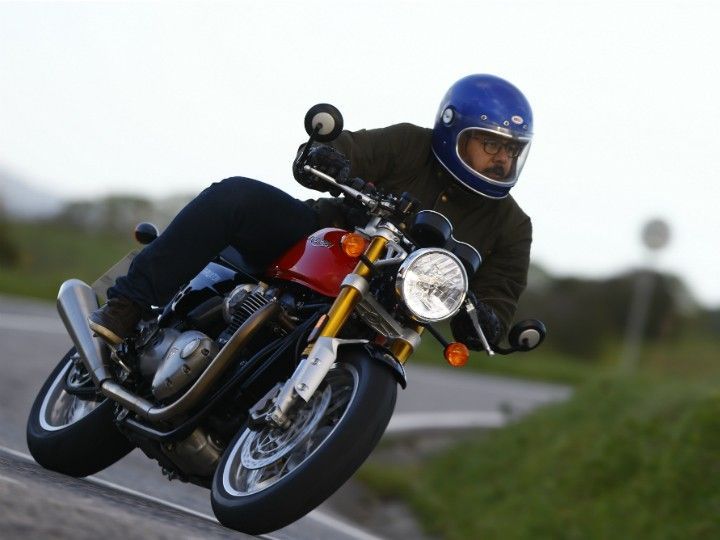 I’m really sorry about this sir. But we assure you that your bags will arrive at your hotel by tomorrow afternoon.” We were told by the duty manager of Emirates airlines after we discovered that our bags from Delhi had never arrived. So one of my life’s most exciting rides yet and forget riding gear, here I was  in Lisbon without even a clean change of clothes. Constant retaliations and flaring tempers later we headed towards our hotel. Upon arriving the first sight that greeted us was a scarlet Thruxton R parked in the lobby complete with its Ohlins front forks gleaming in the light. My heart fell so hard to my stomach that I almost collapsed on impact. But a glimmer of hope came in the assurance that Triumph was willing to provide us with the gear. So the next afternoon with our luggage still nowhere in sight we met our rides for the day. Mine, was the scarlet one that almost swept me off my feet, literally.

Just look at it. The pictures don’t do justice to just how beautiful this motorcycle is. The proportions are perfect for a café racer and it keeps all of its illustrious heritage intact. The tank is sculpted and long with knee recesses which come in handy to grip the tank tightly even though, it does put your knee quite close to the engine head but in the cold Cascais weather it was a boon, trust me. There is a brushed aluminium strip that runs the length of the tank and the Monza style fuel filler cap cover is also finished in brushed aluminium. And then there’s the suspension, where the Thruxton makes do with Kayaba units, the Thruxton R gets the best in the business, big-piston fully adjustable Showa front forks and Ohlins twin rear shocks. Both finished in that beautiful shade of gold.

It sports a twin 310mm floating disc brake setup upfront and a single rotor with 4-piston monobloc calipers at the rear and ABS and traction control comes in as standard and you really need the TC (we’ll get to that in a bit).  Combine all of that with the quintessential bar-end mirrors, brushed aluminium engine fins and reverse megaphone exhausts and you get a motorcycle so beautiful that you would kill for it. The perch too is comfortable, as comfortable as a café racer seat can be. Just like the T120 it also gets a retro instrument panel with modern digital screens but with the button to switch between the three riding modes is on the left side switchgear and the heated grips have also been given a miss. The bike sits on 17-inch wheels on both ends and the rubber chosen for the R are the Pirelli Rosso Corsa tyres, again best in the business.

The engine is the heart and soul of the Thruxton and it isn’t afraid to show it. Though essentially it is the same liquid cooled 1,200cc 8-valve SOHC engine as the T120 but features a lot of changes. The ECU map for one is specific to the R and it comes with a ride by wire system. It is also fitted with a lighter crank compared to the T120 so that it revs faster and even the rev limit has been increased by 500rpm. Needless to say it makes more power and torque than the T120 and the old Thruxton but it’s by how much and where in the rev range is what makes the difference. It makes 97PS of max power at 6,750rpm and 112Nm of peak torque at 4,500rpm. The torque is up by 62 percent over the previous Thruxton and the power is up by as much as 41 percent. What’s astonishing is that you have most of the torque, 100Nm to be precise available to you from as low as 2,500 rpm.

The Thruxton R comes with three riding modes namely rain, road and sport. Though these modes in no way restrict the output of the motorcycle but play with the throttle mapping. In Rain mode, the power delivery is smooth and borderline lazy (relatively of course), in Road mode, the power delivery is more urgent but it’s the Sport mode which can take you by surprise especially if you’ve just shifted from Rain, straight to Sport. The acceleration, the moment you rig the throttle is instantaneous and can actually snap your neck back if you’re not expecting it and it’s not a reassuring experience.

Considering that Thruxton R is a completely rider focused motorcycle it has a surprisingly good ride. The minor undulations will disappear quickly but the bigger ones will make themselves felt despite the 120mm travel in the rear shocks. But having said that, the motorcycle rides as beautifully as it looks. The Ohlins suspension, the Brembo brakes, that gem of an engine and the Rosso Corsa rubber all come together for a mesmerizing riding experience. The Thruxton’s rake angle has been shortened and the head stocks have been reworked as well and combine with that a shorter swingarm and you get a compact motorcycle that turns in at the slightest hint of steering input.

The roads we were on took us through some of the best riding surfaces but there were a few bumps in the way but the taut chassis and the perfect suspension setup kept the bike stable under all 'bumpy corner' conditions. Come barreling down a long straight brake hard before a corner and you realize the bite from the Brembos is immense. Yes, they lack a bit of initial feel but when you grab the brakes you can feel the pressure on your face. Throw the Thruxton into the corner and it complies eager to devour the corner. Even when fully leaned over and the pegs just an inch or two away from the tarmac, you never lose confidence in the motorcycle. And the grip from the Rosso Corsas is simply phenominal and it gives you the confidence to put the power on to the road. The traction control system too is non-intrusive and only cuts in when it detects you’ve seriously over cooked it and to prevent involuntary wheelies.

We rode till night fell and on the way back I was cold, numb, my wrists were beginning to hurt thanks to all the twisty riding but I just didn’t want to let the bike go. I could ride it through the night and just revel in the way it simply flows from one corner to the next without even a hint of a frown on its face. We arrived back at the hotel with our backsides sore to the bone but smiling from ear to ear. Then we were told our baggage had still not come but frankly I didn’t care anymore.

It looks so beautiful that if you bought one you would love to sit and admire it all day and never ride it. But that would be an insult to its capabilities. It is an absolute hoot to ride and its capabilities are best experienced on the road and the best bit is every last Nm of torque and every last strand of power is completely usable in the real world. And despite being a modern classic the Thruxton R can very well give some contemporary sport motorcycles a run for their money especially in the fun department. And when you’re buying such bikes, the fun factor is what really counts.