These three are currently the most popular subcompact SUVs on sale, but which one appeals to the enthusiast in you? Let’s find out. 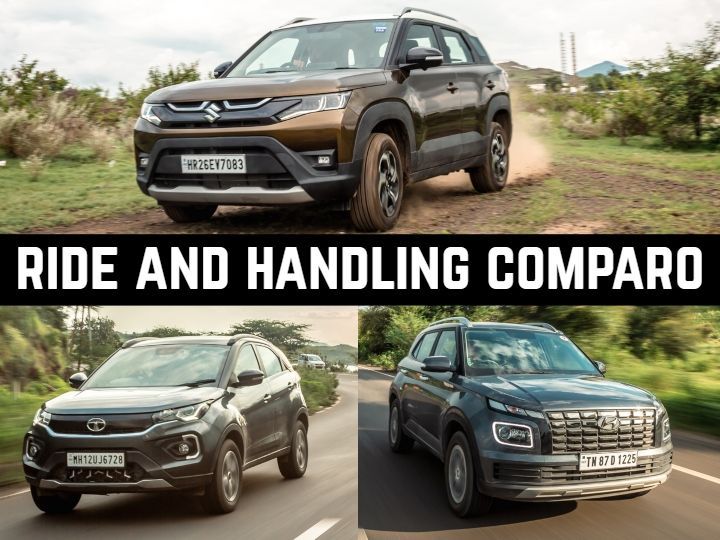 The Maruti Brezza, Hyundai Venue and the Tata Nexon are among the best-selling subcompact SUVs. What makes these SUVs popular among the masses is the practicality and ample features they offer and mainly, they look more dominating than premium hatchbacks.

But, If you are looking for more zing and fun from your SUV, which one of these appeals to the enthusiast? We find that out in our ZIG special ride and handling test.

Comparing the petrol versions of these SUVs, the Venue iMT does the 0-100kmph sprint in the least time, just above 10 seconds. Even the Venue’s DCT is quicker than either of the two, but not by a huge difference when compared to the Nexon petrol. The Brezza takes over 15 seconds to do the same sprint and comes up short. So, the winner of the acceleration test is the Hyundai Venue, followed by the Nexon and then the Brezza!

The Nexon has the best stopping power here. All three of them run the front disc and rear drum brake setup as standard. While testing, we found the braking performance good and confidence-inspiring in all the three cars.

Starting at the speed of 60kmph, all the three cars maintained their line without any drama. If you see, the body roll also looked well in control. Since it seemed too easy, we decided to increase the speed to 65kmph.

Now, here you can see some minor understeering kicking in. The SUVs are starting to go wider and move away from the line. The Nexon feels most confident and agile here, thanks to its sportier suspension setup. Even the Brezza and Venue, despite steering a bit away from the line, feel calm and planted. But, still no cones flying? Let’s do the 70kmph cornering test.

The winner of this round and our cornering test is the Maruti Brezza. It managed to knock over just one cone while cutting very close to the second one. The line was definitely wider than the 65kmph test, but less than the other contenders here. The Nexon and Venue were very similar in this test as both of them plowed into two cones each. The sidewall of the tyre knocked the first cone while both completely went over the second one. However, body roll was felt more in the Venue, while the Nexon still felt stable.

In our ride quality test, famously known as the mug test, we take the cars through a broken patch of road and see how many millilitres of water spill out of the standard container. Interestingly, the Brezza is the winner here, spilling just 200ml of water. The Venue spills just 250ml of water, which puts it in the second position. The SUV gets softer springs, which helped its case here. The last place is grabbed by the Nexon, with 270ml of water spilled.

Now, when we take out these SUVs on the road, the Maruti Brezza feels the best and most balanced here. Its cabin makes you feel most comfortable in varied driving conditions. The Nexon’s stiffer setup gives it a sportier ride quality. At high speeds, it gobbles up potholes and undulations easily, but there’s noticeable movement inside the cabin at low city speeds.

That said, the Tata Nexon also feels very well planted on the highways while doing triple-digit speeds. Hyundai Venue’s soft suspension setup makes it the most comfortable in the city, at slow speeds. However, as the speed increases, the sharpness and thuds of the severed roads are felt inside the cabin.

In most of these four tests, the Tata Nexon managed to score good points, which makes it the winner here. It gets decently quick acceleration, better braking performance and a sportier ride quality, which make it outshine its rivals.

As for the Maruti Brezza, it offers a more balanced ride with better cornering capabilities. But, its acceleration is a letdown compared to the Venue and Nexon’s turbo-petrol engines. We would say that the Hyundai Venue ties with the Brezza for the second position, as it’s better in performance and similar in the braking test.