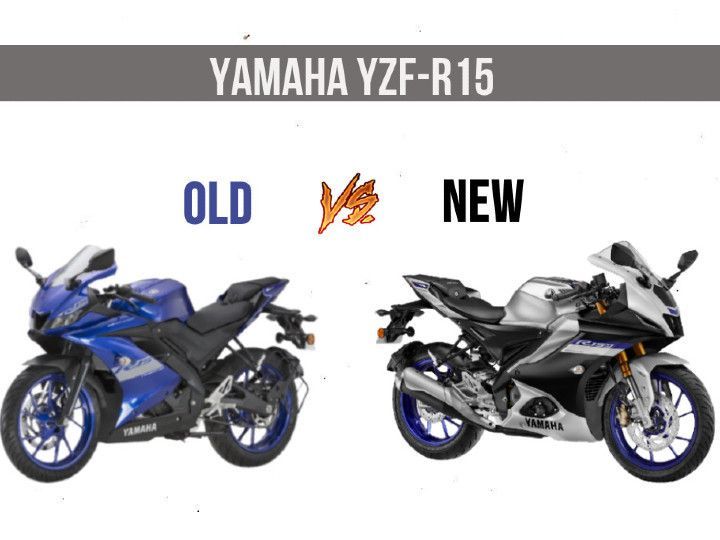 In 2008, the Yamaha R15 had fuelled Indian enthusiasts’ love for faired motorcycles. Ever since, the supersport has been raking good sales numbers for the manufacturer. As much as we loved it, Yamaha India cut corners with the R15 V3. But with the new R15 V4, things have changed for the better. Not only is India the first country to get the baby supersport, but it does with all the bells and whistles.

And if you thought that the changes were skin-deep, think again. Or maybe don’t, because we tell you exactly how the new model compares with the outgoing bike:

The international-spec Yamaha YZF-R15 V3 was equipped with a USD fork, which the Indian model missed. Now, Yamaha India has fixed it, arming the baby supersport with the new 37mm golden USD fork instead of the 41mm telescopic unit. Additionally, for the top-of-the-line Yamaha R15M, the fork gets anodised blue caps.

The Yamaha R15 has been a pretty simple motorcycle, with the only electronic aid coming in the form of ABS...until now, that is. With the YZF-R15 V4, Yamaha has gone all guns blazing, giving it traction control as standard, a segment-first feature.

Furthermore, there’s a quickshifter for upshifts (standard on the R15M and Racing Blue, optional for other variants). The system activates when the bike is above 20kmph and the engine rpm at or over 2000rpm and accelerating.

More Than Just A Visual Overhaul

The YZF-R15 V4 adopts Yamaha R7's design language -- a Bi-LED headlight in the central air vent, flanked by LED DRLs on both sides. Even the side fairing design has been revised. All these changes do a lot more than make the bike look appealing. Yamaha claims that the new fairing design has reduced the coefficient of aerodynamic drag (CdA) from 0.307 to 0.293.

Connect With Your R15 Better

Yamaha has equipped the YZF-R15 V4 with a new instrument console inspired by the mighty Yamaha R1. This display is bigger than the R15 V3’s and packs more data too.

The baby supersport finally gets smartphone connectivity via the Yamaha Connect-X app. Now, the console displays call/SMS alerts, phone battery status, and once paired with the app, you get features like maintenance recommendations, fuel consumption recorder, parking location pin, digital rev counter on the app, and even a ride ranking system.

The console itself now packs two display modes: Street and Track, the latter now displaying a lap timer too. You can toggle between these through the new switchgear.

A Bit Low On Power

Yamaha’s VVA-equipped 155cc single-cylinder liquid-cooled engine hasn’t been tinkered with much, but in the R15 V4, the power has dropped marginally. Instead of the R15 V3’s 18.6PS, the bike now generates 18.4PS. The 14.2Nm torque, however, has seen a marginal rise from the V3’s 14.1Nm.

The Yamaha R15 V3 was available in only one variant and four colour options. With the 2021 Yamaha R15 V4, Team Blue has introduced the new R15M variant, packing an exclusive paint scheme, 3D badge, a different seat with embroidered branding, anodised caps for the forks, and a silver swingarm.

Given the bunch of updates, a price hike of Rs 10,000 is justifiable, especially considering the addition of segment-first features. But what do you think of the R15M’s pricing? Let us know in the comments section below.