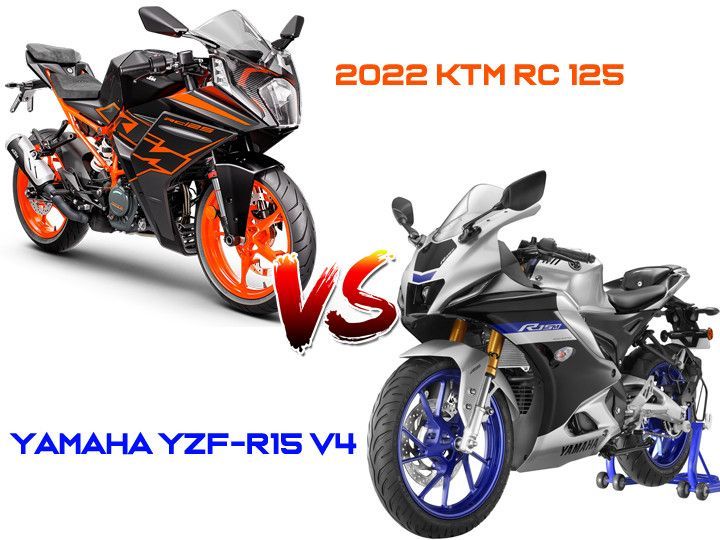 The entry-level supersport segment just got a little more existing thanks to the launch of the new YZF-R15 Version 4.0. It’s been thoroughly revised for 2022 with better looks, equipment and a solid features list. Meanwhile, KTM is preparing the stage to introduce the 2022 RC 200 which has also witnessed a number of improvements over the current model. So which one of these bikes makes more sense on paper?

The 2022 RC 200 has a clear advantage over the YZF-R15 Version 4.0. It’s substantially more powerful than the Yammie in every possible way. However it makes most of its power higher up the rev range so you really need to wring the throttle to get the most out of the engine.

The R15’s VVA-equipped engine is a lot more usable thanks to its linear power delivery. It’s unlikely to heat up as much either. Moreover, the R15 could shave off crucial seconds with the help of a quickshifter which is available in the Racing Blue and ‘M’ variant.

Both bikes are pretty heavily equipped in their 2022 trimThe USD fork on the RC 200 is a bit more sophisticated than the R15. It also packs larger discs and a radially mounted caliper which should offer better braking performance compared to the Yammie.

Let’s not forget the tyres. The RC 200’s fatter radial construction offers low sidewall flex and more contact with the ground. In comparison, the R15 only gets a rear radial tyre and a bias- ply unit up front with  a smaller contact patch, which may result in overheating. However, the difference between the two tyres would be rather small in the real world.

The previous-gen R15 was known for its razor-sharp handling, and we expect the same from the fourth-gen model as well. It’s light too, which could make it a lot more flickable compared to the slightly heavier RC 200. At 815mm, the seat height on the R15 is more accessible for shorter riders.

The RC 200 has always been a dream to ride on the track. It’s sharp, agile and stable at high speeds. So expect the same traits from the 2022 model. It also features a larger fuel tank which means fewer fuel stops. However, the bike’s underbelly exhaust does eat into its ground clearance -- something that’s absolutely crucial considering Indian road conditions.

The 2022 R15 makes a strong case for itself when it comes down to its features list. It’s packed to the brim. Aside from having an LED headlight and taillight, it also gets a new digital console  with Yamaha's Y-Connect app and two display modes (Street and Track).

While the RC 200’s console is equally impressive, it doesn’t quite match up to what the Yammie has to offer.

Pricing is where the Yamaha R15 V4 makes a lot of sense. Yes, it’s a premium motorcycle, so you are paying a hefty price for the equipment. However, it’s still a LOT cheaper than the 2022 RC 200 which is expected to cost well over Rs 2 lakh.

So if you’re fairly new to motorcycling and would like to hone your skills, the R15 makes sense, though it may require an expert hand to extract the most out of the chassis and engine. The RC 200, on the other hand, would be easier to ride and less intimidating in terms of handling.