Yamaha has updated the R15 with new aesthetics, electronics as well as new hardware 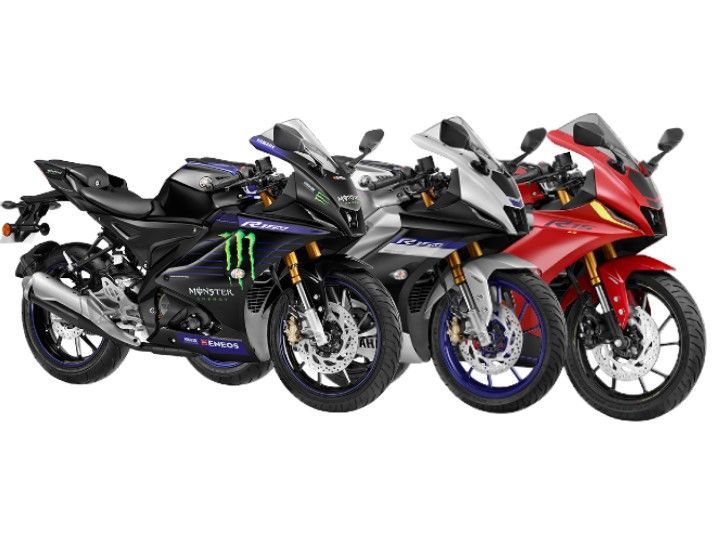 Yamaha has left everyone drooling with the YZF-R15 V4, considering it has received a complete overhaul in terms of design, electronics and hardware, and has been launched in as many as three trims: YZF-R15 V4, YZF-R15M and YZF-R15 MotoGP Edition. All three variants are powered by the same 155cc liquid-cooled motor dishing out 18.35PS and 14.2Nm. Even the design cues are the same across the range. However, the major differentiating factors are the colour options, electronics and pricing. Here’s a thorough explanation.

The R15 V4 is available in three paint schemes: Metallic Red, Dark Knight and Racing Blue. The asking price is set to Rs 1,67,800, Rs 1,68,800 and Rs 1,72,800, respectively. Traction control and a digital console with Bluetooth connectivity via the Y-connect app are standard throughout the range. A surprising addition is the quickshifter, which comes standard for the Racing Blue colour, and as an optional extra with the Metallic Red and Dark Knight colour schemes.

Moving ahead, Yamaha has also added the YZF-R15M to the portfolio. It gets the iconic YZF-R1M-inspired Silver and Blue paint scheme, a carbon-like seat cover material and the R15M logo on the pillion seat. And adding to the aesthetics are the anodised Blue colour fork caps, golden brake callipers, grey swingarm and grey coloured heat shield as well.

Like the R15 V4 Racing Blue, the R15M too gets the quickshifter and traction control as standard fitments along with the Bluetooth-enabled cluster.

Most of the two-wheelers available in Yamaha’s stable get a MotoGP Edition livery. So it was only right for the bikemaker to offer the YZF-R15M MotoGP Edition as well.

The bike comes wrapped in black and blue colours, along with the Monster Energy MotoGP livery. In fact, everything else, apart from the R15M emblem on the pillion seat, has been carried over to the GP version. That said, Yamaha will offer the R15M MotoGP Edition in limited numbers, and at Rs 1,79,800, it’ll be the most expensive offering in the entire range.