What better way to put the new Ciaz, with the 1.5-litre diesel, to the test than pitch it straight into a battle with its closest competition 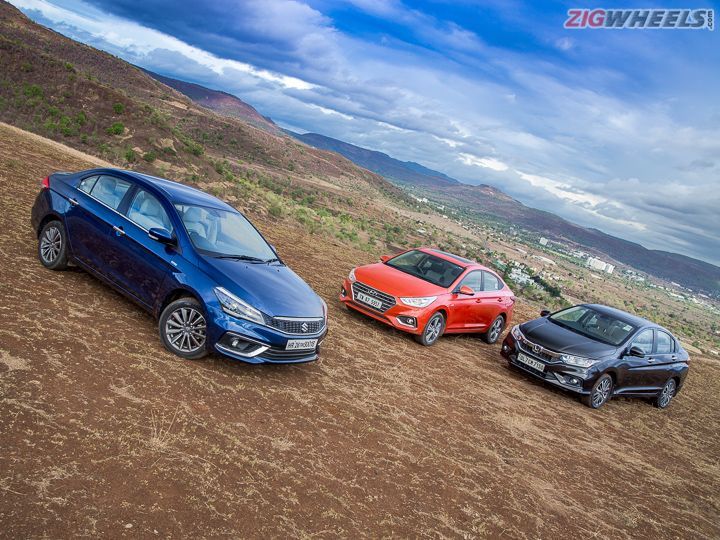 Maruti’s new DDiS225 diesel is finally here, but it took its own sweet time. In fact, with Maruti’s recent announcement to move focus away from diesel power, it’s so late to the party that even Maruti seem poised to pull the plug on their youngling. For the moment though, it does duty in the Ciaz and the Ertiga alongside the old Fiat-sourced MultiJet 1.3-litre diesel engine. So, does the new, more powerful engine give the Ciaz the firepower it needed to take the fight to the more powerful Honda City and Hyundai Verna?

The engines and driving impressions
Considering that the main reason we are here today is because of that new DDiS225 engine, let's get straight to the oily bits. This new motor from Maruti Suzuki makes 95PS@4000rpm and 225Nm@1500-2500rpm. That’s 5PS and 25Nm more than the 1.3-litre engine that it was built to replace, but it’s also the least powerful in this comparison. Maruti hasn't equipped the new Ciaz with the mild-hybrid system but that’s still available with the 1.3-litre variants. While it did smooth out the laggy power delivery of the Fiat-sourced engine, the new 1.5-litre Maruti Suzuki engine feels just fine without it. In our efficiency tests, the Ciaz managed to top the city test returning 19.49kmpl, but out on the highway it was the least efficient at 22.43kmpl.

The new Ciaz is very easy to drive in the city with smooth, linear power available from as low as 1200rpm. Out on the highway too it’s happy to sit at triple-digit speeds and at 100kmph, it’s only ticking over at 1900rpm which is in the meat of the torque band. So overtakes just require a prod on the accelerator without the need to drop a gear. That’s also reflected in brisk roll-on times of 14.68s from 40-100kmph in 4th gear.

Refinement levels are impressive, though with very little engine note audible inside the cabin even at idle, but that’s also down to good sound deadening. Overall, though, the Ciaz encourages you to drive in a more relaxed manner and though the softer setup won’t really excite the enthusiast with its handling, it’s the comfiest of the three.

In comparison, the Honda chassis is quite nice through a set of corners with its stiffer suspension keeping body roll nicely in check. But the 1.5-litre iDTEC engine from Honda which makes 100PS is the least refined of the three and both diesel clatter and vibes are felt more obviously inside the cabin.

Turbo lag is also much more evident and this means that in traffic and even out on the highway, you need to work the gearbox a lot more than in the Ciaz. The Honda Earth Dreams engine may lack the refinement of their petrol engines, but it is efficient, returning 18.48kmpl in the city and returning the best highway mileage of 24.19kmpl.

The Verna 1.6-litre CRDi is the largest and most powerful motor here, putting out 128 horses. Like the Ciaz, it’s nice and refined, but a little bit of diesel clatter does makes its way into the cabin at lower rpms. It’s still quieter than the Honda though, and like the Ciaz, also has nice driveability at lower rpms, off boost. At cruising speeds, that extra power comes in handy, negating the need for downshifting. This new platform, borrowed from the Elantra, is more stable. So it doesn't bob around over small imperfections like the older Verna while still offering passengers in the rear seats similar levels of comfort. It’s not quite in the league of the Honda, but can be exciting too.

One more thing that the Verna has in its favour for city use is the fact that it’s only one of the three that has automatic transmission options with both petrol and diesel engines. In our tests, it returned 18.05kmpl in the city and 23.38kmpl in its highway efficiency run. With its power advantage, it’s no surprise that it’s also the fastest in the sprint to 100kmph.

In the back seat
If you want to spend a lot of time in the rear seats, the Ciaz is the car to be in. You sit in a commanding position with great visibility out the sides and in the front as well, and it has the most leg room of the three. Head room would probably be the only complaint for passengers over 6ft tall. The light colours and faux wood trim also give it a very plush feeling that the other two can’t match up to. But you will have to take extra care keeping it looking spick and span. It also rides in a very composed way over bumps and bad roads. All three cars have rear air con vents and charge points, but the Ciaz also has a storage slot to keep your phone closer to the charger.

The Honda is next up with similarly generous legroom - the seats are also a tad bit more supportive and the seat cushioning is softer and the seats are set at a nice relaxed angle. The floor even has a nice slope to it that acts like a foot rest. While all three cars have rear AC vents, the ones in the City are larger and throw air better to the rear passengers. But what spoils what could have been a really great experience is the stiff ride that picks up smaller imperfections and jostles you around on the rougher stuff. The City is the only car that sports two 12V charging ports at the rear.

The Verna then takes the last position in the rear seat stakes. Leg room is strictly adequate in the Verna, but it’s more about the feeling of being hemmed in rather than the lack of legroom. The seats are reasonably comfortable too, but there could have been a little more underthigh support.

Packing in value
With a price tag of over Rs 15 lakh, it’s a given that these cars are expected to make a reasonably loud ‘bada gaddi’ statement. And here, the Honda and the Verna make a bigger splash than the Ciaz. The City’s sharp lines, flashy alloy pattern and all-LED headlamps do make it stand out, especially when daylight starts to fade.

The Verna is available in some nice bright colour options like this bright orange and there’s even a nice radiant ‘Marina Blue’ as well. It’s not quite as flashy as the Honda, but its sloping roof line, large projector headlamps and funky tail lights make it quite appealing. The Ciaz treads lightly here, adopting a neutral, almost boring design save for its multi-spoke alloy wheels which personally look the best of the three.

When it comes to the quality of the materials and the fit and finish of the plastics and panels, the Verna comes out on top with a very nicely designed dash and fit and finish. The Ciaz has been nicely spruced up with its last update and the faux wood finish, beige interiors look and feel pleasingly upmarket. Honda has used nice soft materials on all the touch points, but the dash design, the interface of the touchscreen and tacky buttons on the steering wheel count against it.

In terms of features, the Ciaz does start to lag behind a bit, missing out on a sunroof and other wow features like wireless charging, ventilated seats and a hands free boot lid when pitted against the Verna.

Even safety features like side and curtain airbags that both the City and the Verna offer in their top ZX and SX(O) variants are not available in the Ciaz. If, however, we do bring cost into the picture, the Ciaz’ top-end Alpha variant is actually priced on par with the City V and the Verna SX variants (one variant below top end) and their features lists match more evenly then.

Verdict
The Honda City, at Rs. 14.16-lakh, is the most expensive car in this comparison and while its space, premiumness and strong dynamics are still impressive, it’s no longer the benchmark that it once was. The Verna, priced at Rs 12.99 lakh is over a lakh cheaper and while it doesn't offer quite as much space as the Honda, its feature list is impressive indeed. Its engine and chassis also strike a nice balance between dynamism and comfort that’s missing from the Honda package. The Ciaz, at Rs 11.38 lakh (all prices ex-showroom Delhi) is the least expensive of the three and it does have that refined 1.5-litre diesel, economics and comfort on its side, but it’s also missing quite a few wow features, a 6-airbag variant and design flair.

So when it comes to picking one, the easiest to leave out is the Honda City, both for the reasons stated above and also the fact that Honda is poised to release its successor soon. The Hyundai is an excellent choice if you plan to spend more time in the front seats and the rear seat experience isn’t a priority. It’s a cracking car for the price and loaded with features. Also, if you can stretch your budget a bit, even the diesel automatic, at Rs 14.05 lakh is less expensive than the City. The Ciaz is the budget pick of the three then, but by no means, offers you a budget experience. If you want a hassle free, comfortable sedan for four with the best-in-class engine, then it packs in all the essentials at a price that’s hard to ignore.