We pit the Ciaz facelift against its rivals to see who comes out on top, on paper 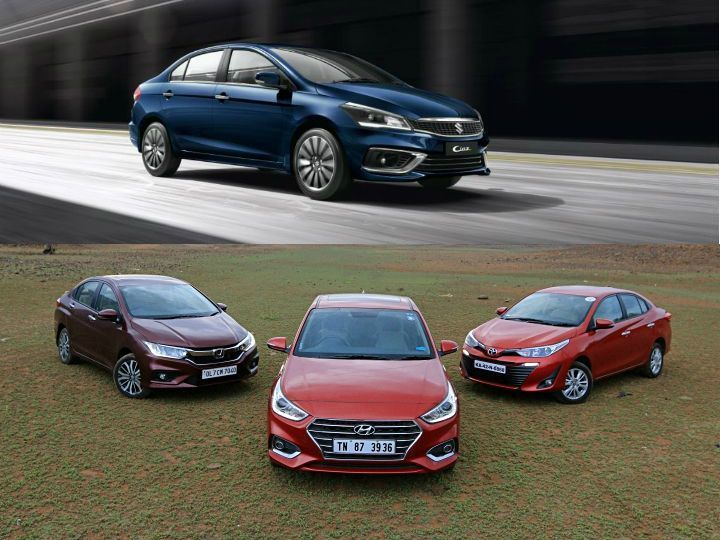 Maruti has launched the Ciaz facelift in India. With the facelift, the Ciaz is expected to take on the increasingly competitive segment head-on. Can the Ciaz facelift now take on the more premium competition like the Honda City, Hyundai Verna and the Toyota Yaris? Let’s find out by pitting them against each other on paper.

The Maruti Suzuki Ciaz continues to enjoy an advantage in terms of price. It is the most affordable car in the segment. While this characteristic has been carried over from the pre-facelift car, does the Ciaz offer more bang for the buck now?

Not in terms of flash value - the Ciaz still misses out on a sunroof (which both the Honda City and the Verna get), all-LED headlamps (which the City gets) and ventilated seats (which the Verna gets). The only convenience feature not offered on the Ciaz is a rain-sensing wiper (the Yaris gets it).

Otherwise, the Ciaz offers everything that the competition does. As standard, it is equipped with a manual AC, electrically adjustable ORVMs, a non-touchscreen-based music system and power windows all around. The Hyundai Verna is not offered with a head unit on the base variant.

The Ciaz trumps the others by being the only car to offer rear parking sensors as standard. While it matches the rest by offering ABS+EBD and dual front airbags as standard. The Yaris one-ups by offering 7 airbags on the top-of-the-line variant.

While all the cars get touchscreen infotainment systems, the City and the Toyota Yaris miss out on Apple CarPlay and Android Auto support. The Yaris stands out with its gesture control feature.

In conclusion, the Ciaz is no longer lacking in features as compared to the competition. Considering the fact that the 2018 Maruti Suzuki Ciaz offers so much at a competitive price, it has, in fact, become more appealing.

The Maruti Suzuki Ciaz is the longest, both in terms of overall space and in terms of wheelbase. It is also the widest in the class along with the Yaris. It compromises on overall height by 10mm as compared to the Verna and the Yaris. Overall, the Ciaz is one the more spacious cars in the segment, at least on paper.

*note, Verna’s 1.4-litre engine not compared because of displacement disparity

The Ciaz now gets a more powerful petrol engine in the form of the K15 1.5-litre motor. But it is not designed for performance; the engine is paired with a micro-hybrid system which utilises a motor generator, lithium-ion batteries, a start/stop system and brake energy regeneration to improve efficiency. The Ciaz takes top spot in the efficiency game, though the Verna MT is not too far behind.

The Toyota Yaris is the only car here not be offered with a diesel engine. Considering the demand for petrol engines is higher in the segment, this may be a smart move. The Ciaz continues to be powered by the Fiat-sourced 1.3-litre MultiJet motor paired with a ‘SmartHybrid’ micro-hybird system as was available on the pre-facelift version. The Ciaz again triumphs in the efficiency department, but at the cost of a huge compromise in performance.

The Hyundai Verna is the only car in this comparison to be equipped with automatic gearboxes for both petrol and diesel engines, offering more choice to customers who prefer driving convenience.

In conclusion, the Ciaz continues to be the car to go for if you are on a tighter budget but do not want to miss out on owning a large-ish sedan.