Is there any serious change to the riding dynamics of currently India’s only mid-displacement cruiser? 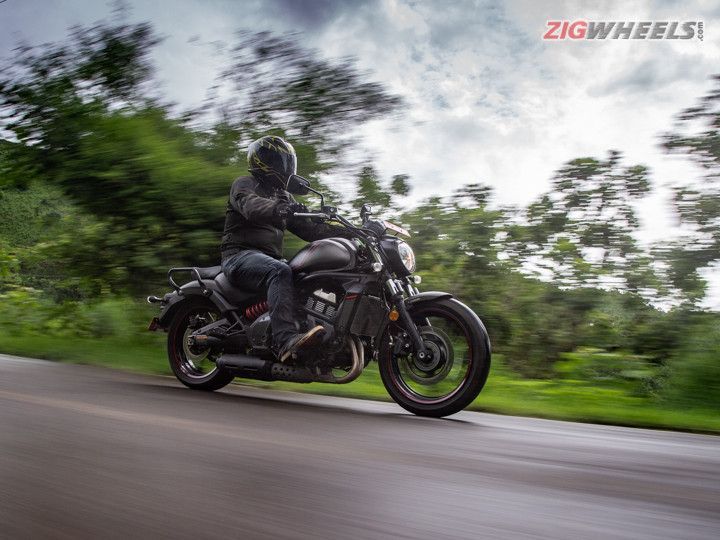 Since Harley-Davidson stopped its India manufacturing facility, the only cruiser you can now buy in the sub-750cc space is the Kawasaki Vulcan S. Yep, it is the Ninja 650’s parallel-twin engine-powered cruiser that has undergone not-so-many changes for BS6. It has seen a sizable jump in asking price, almost to the tune of Rs 30,000. So, just how good is this cruiser from Kawasaki, and does it still make sense in a market devoid of any mid-capacity cruisers?

Even though there is no discernible difference between the BS6 and BS4 versions of the Vulcan S, the newer model feels more energetic. That is a similar feeling we had with the 649cc parallel-twin on the Ninja 650 and the Z650. The sense of urgency is amplified by the louder intake note and a hint of that buzz throughout the rev range.

Neither the gear ratios nor the kerb weight has changed. And 0.6Nm loss in torque isn’t going to result in a 0.5-second difference in roll-on acceleration. It ultimately boils down to our new road tester, who is a bit porkier than our previous one. Time to put him on a strict diet regimen.

The engine still remains highly tractable. It allows you to ride at around 35-40kmph in fifth gear with no need to downshift to make a quick overtake. Heat management has never been an issue with this engine, so you need not worry about cooking your legs in peak traffic.

It can cruise comfortably at 120kmph, even if the engine gets a little shouty at that speed. Ride sensibly, and the 14-litre fuel tank should last you for just about 290km, which is decent. City fuel efficiency has taken a bit of a hit but we observed something similar on the Z650 as well.

Unchanged Quirks And All That’s Likeable

Aside from the paint scheme, the Vulcan S remains the same as before. It continues with a conventional cruiser riding stance with those annoyingly inward-angled mini ape hangers. The rider’s seat has got a nice thick cushion.

The handling remains relatively neutral with a vague front-end feel when you start edging closer to the bike’s limits. The spring setup remains quite soft, and thanks to the low travel at the rear, the monoshock tends to bottom out, especially over large speed humps. The monoshock has a quick rebound action as well. So, over small sharp humps, you could be tossed off the seat.

Lastly, one has to remain ultra-cautious when going over small plastic speed humps. More often than not, you end up banging the underbelly exhaust. That isn’t a pleasant experience when you are putting down big money for a bike like this.

Braking remains strong and consistent. There are none of the ABS niggles that we experienced on the Ninja 650.

However, what is missing are the LED headlight and colour TFT screen, which were added to its 650cc siblings last year. At an asking price of Rs 6.04 lakh (ex-showroom India), we would’ve really liked to see these on the 2021 bike.

The Kawasaki Vulcan S isn’t a typical torquey cruiser with a deep bassy exhaust note. It also lacks modern elements, which is a bit disheartening. But even when you consider all its shortcomings, it is still a capable cruiser adept at mile-munching.

It remains the lone warrior in the mid-displacement cruiser class in India, and it makes a compelling case for itself if you’re seeking an affordable big-cruiser experience.

That is until the 650cc Royal Enfield cruisers come our way. While those will not match the Vulcan in performance, they will undercut the latter in pricing, that too by a sizeable margin. So, if you aren’t too eager, we suggest you wait for a couple of months and then make a purchasing decision.