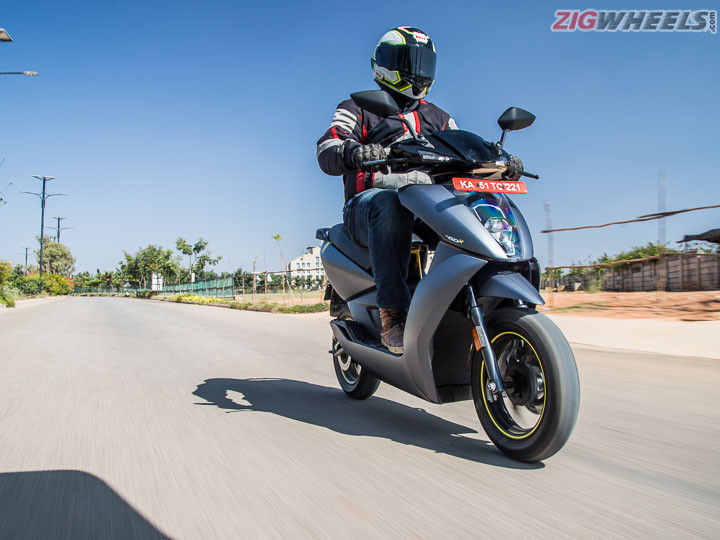 Up until 2018, electric scooters were looked upon as cheap, boring and slow. All that changed when Ather Energy rolled out the Ather 450. It was exciting, modern, quick and premium and managed to make a statement that EVs can be fun. It’s been two years since the launch of the Ather 450, and 2020 seems to be the year of electric two-wheelers with Bajaj introducing the all-electric Chetak and TVS launching the iQube recently. While the Ather 450 still doesn’t have any real rival, the boffins at Ather felt it could be made better and have introduced a much faster, lighter and tech-loaded version of the same - the Ather 450X.

The X signifies more performance. Although the battery size of the Ather 450X is similar to its predecessor, capacity has risen to 2.9kWh from 2.7kWh and torque has gone up from 20.5Nm to 26Nm. If the hike in specs wasn’t enough, Ather’s engineers also managed to make the scooter lighter by 11kg! This was achieved by using lighter microcontrollers and re-engineering the headstock tubing. With the drop in weight, hike in torque and a new “warp” mode, the Ather 450X is a hoot off the line. According to Ather, the 450X can get from 0-60kmph in just 6.5 seconds, making it the quickest scooter in its segment.

While it feels super quick till 60kmph, performance starts to taper a bit post that mark and top speed has been restricted to 80kmph. It manages to sustain speeds around 70kmph rather easily and there’s a hint of vibration from the footboard intermittently. The peppy nature of the motor should make it a fun to ride scooter in the city and you’re sure to win many traffic signal drags! Also, Ather claims that the gradeability of the scooter has increased from 18° to 25°, which should help the scooter perform better on inclined surfaces.

While the hike in performance is impressive, what’s more astonishing is the fact that Ather’s engineers have managed to squeeze out more range as the 450X has a claimed real-world range of 85km. Apart from Warp mode, you have Eco, Ride and Sport mode. Since we rode a pre-production unit, it didn’t have the Sport mode. Eco is fine for crawling traffic while Ride mode is decent enough for regular commuting, but Warp is where the fun’s at. It also gets a reverse mode like the standard 450 to assist you with parking.

The Ather 450 is the most tech-laden scooter on sale in India and you can read about its features here. On the 450X, Ather’s engineers have added 4G connectivity for faster OTA (over the air) updates and the operating system has been shifted from Linux to Android. This has been done for smoother user interface, better app integration and it also gets pinch-zoom function in maps.

The TFT touchscreen now gets a ‘dark mode’ based on feedback from customers and the display looks crisper than the older unit. The 450X features Bluetooth for call and music control. Voice control is another interesting addition and Ather will also be offering a connected helmet as an optional extra. Another option will be a tyre pressure monitoring system (TPMS).

Swiftness isn’t restricted to just acceleration as the new electric scooter also charges up quicker. Fast charging time has increased from 1km/min to 1.45km/min, but the fast charging option is only available on the Ather Grid. Standard charging time for a full charge using a 5A plug is 5 hours and 45mins.

Currently, Ather’s scooters are only available in two cities - Bengaluru and Chennai - through its self-owned experience centres. However, it has plans to expand into cities like Hyderabad, Mumbai, New Delhi and Pune in 2020. Rather than setting up experience centres on its own, the EV brand has been inviting dealers in new cities.

The Ather 450X is priced at Rs 99,000 (ex-showroom Bengaluru) and Rs 1.05 lakh (on-road). This makes the new electric scooter almost Rs 9,000 cheaper than the Ather 450! Now, isn’t that a great deal? But, just like all great deals, this one comes with a catch as well. For that price, what you get is just the base scooter and customers will have to opt from one of two performance packs - Pro and Plus Ather 450X Price.

The Pro and Plus plans are priced at Rs 1,699 and Rs 1,999 per month. So Ather likens the 450X to your phone while the experience packs are like your sim card through which you can decide how much call time and data you need. The Plus performance pack is the fully-loaded version with the Warp mode. The difference between the two packs is explained in the table below.

Buyers also have the option of skipping the experience plan and buying the top-spec scooter upfront, which will cost them Rs 1.49 lakh and Rs 1.59 lakh (both prices, ex-showroom Bengaluru) for the Pro and Plus variants, respectively. The Bajaj Chetak’s premium variant, on the other hand, retails at Rs 1.15 lakh (ex-showroom). But the biggest advantage of the performance pack is future-proofing. When Ather introduces new features in the future, such as better connectivity or an increase in the battery range, you're eligible to receive these upgrades under the plan. And the battery warranty is unlimited too, as long as you’re on one of the plans, while it’s limited to three years if you pay the full amount for the scooter up front.

In most electric scooters, the battery pack and the motor are placed in the rear, which means these scooters aren’t the most balanced two-wheelers out there. On the Ather 450X though, the battery is located under the footboard and the motor is at the rear, which gives it an almost 50:50 weight distribution. The above aspect and the fact that the 450X is 11kg lighter means that it has brilliant handling dynamics. The scooter tips in very easily and feels super agile. Direction changes are almost telepathic by scooter standards and I am certain the 450X will be loads of fun on urban roads. Ather will be offering fatter TVS Remora tyres as an option, but my suggestion will be to stick to the standard tyres as the optional rubber will reduce range and acceleration.

My only grouse is that the handlebar could have been positioned higher as it brushed against my thighs while taking U-turns. Ride quality is also on the firmer side as the telescopic fork feels stiff and on broken surfaces, the ride can be a bit juddery - similar to the Honda Activa with its trailing link unit. The rear suspension does a much better job of absorbing undulations.

The Ather 450X is also the only scooter in its segment to feature disc brakes on either end and it’s got great stopping power with a strong bite. However, the rear wheel has the tendency to lock-up rather easily and this could be disconcerting for inexperienced riders. We really hope that Ather is able to improve the CBS calibration, which in return should give more confidence to riders.

In terms of styling the new scooter looks similar to the 450, which isn’t a bad thing as the sharp styling makes it look sporty. The 450X gets more colour options (white, grey and green) and a dual-tone finish, increasing its visual appeal over the standard 450. As seen on the older scooter, the 450X gets LED lighting all around. Since the battery pack is in the footboard, the 450X boasts a massive 26 litres of underseat storage space.

Fit and finish levels on the scooter are impressive with tight panel gaps and high quality plastics. The forged mirrors and side stand adds a dose of premiumness. But the switchgear feels outdated on such a modern looking product, especially when compared to the new Bajaj Chetak.

As we had mentioned before, the Ather 450 is the benchmark for electric two-wheelers in India and the 450X takes that benchmark to an even higher level. The fact that Ather’s engineers managed to extract more performance and increase the range at the same time is very impressive. Also, the new colours give it some extra flavour as well. So if you’re looking at a quick, fun to ride and tech-loaded scooter, the 450X is a no brainer. But the jump in price is quite significant (Rs 25k more than Chetak) if you want to buy the scooter outright. If you factor in the base scooter with a subscription to the monthly performance packs, it doesn’t sound like a bad deal. But that would really require buyers to look at electric scooters as part product, part service. If they can’t do that, it still sounds like an expensive affair. Still as a product, the Ather 450X delivers on all fronts and is the best electric two-wheeler that you can get in India.

While the Ather 450X will be available in more cities in 2020, there’s one problem, which is the fact that the brand will have only one dealer per city. The Bajaj Chetak, on the other hand, will be sold by multiple dealers in every city. So does it make sense to go for the 450X as your first electric scooter? Or should you opt for the Chetak for Bajaj’s wide sales and service network? Now, wouldn't that be an interesting contest!