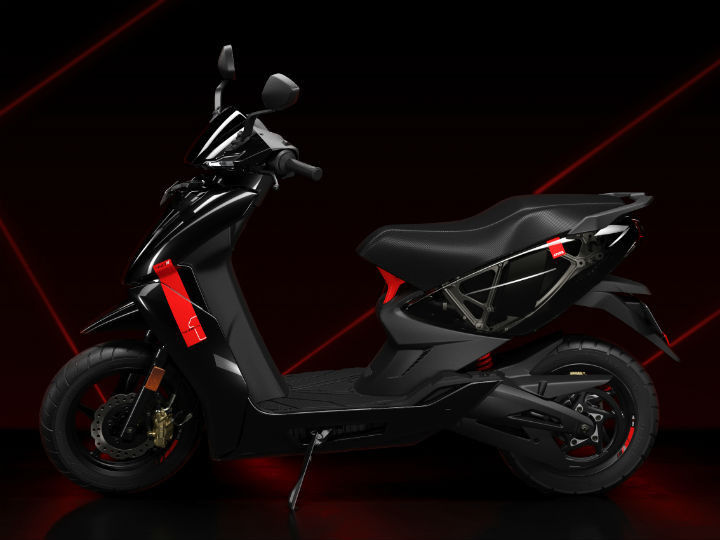 Ather Energy recently launched a special collector’s edition scooter called the Ather 450X Series1 for those who pre-ordered the electric scooter even before knowing any technical aspects of it back in January. The changes made to this special edition scooter is limited to aesthetics, and it doesn’t carry a premium over the standard variant either. Check out its detailed images below.

The Ather 450X Series1 is quite a looker thanks to the black colour scheme with red highlights. It looks a lot more stealthy compared to the regular version but also manages to stand apart with its exclusive livery. The deliveries of this scooter will commence from November.

The red racing stripes are minimalistic and it runs across the scooter’s apron panels. It also gets a red Ather logo on the side panels at the rear.

To match the scooter’s exclusivity, it also gets a slightly customised User Interface with red highlights on the 7-inch touch screen.

The exposed trellis frame is usually painted green in regular variants, whereas the red colour in the Series1 really brings out the scooter’s sporty intent.

The biggest talking point has to be the translucent panels on the side. It is made out of specially engineered polycarbonate material. Ather says the internals of the scooter have not been meddled with so as to give an authentic look. To ensure privacy and safety, the underseat boot is still opaque.

The Ather 450X Series1 even gets special red-themed rim tapes. As usual, it also gets the tyre pressure markings: a novel way to let the rider know instead of a gaudy-looking conventional marking on the frame or body panel.