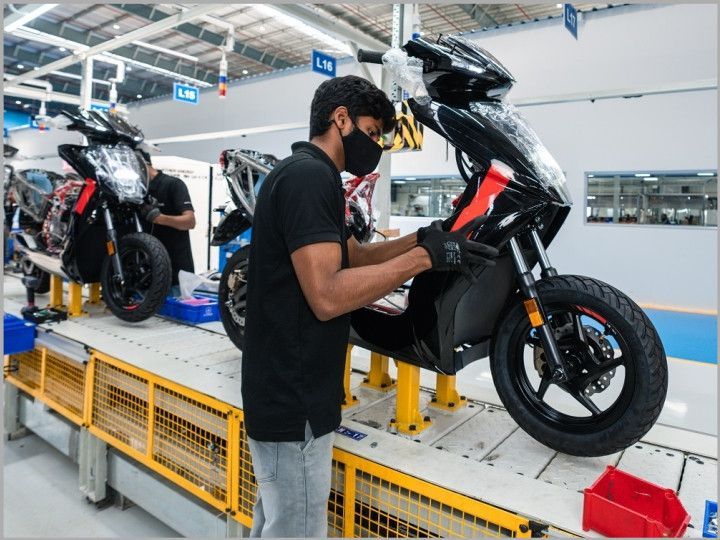 Ather Energy has come a long way from being an IIT-Madras-incubated idea to becoming a manufacturer of some of the most technologically advanced electric scooters in India - all in less than a decade. The Bengaluru-based company recently moved its production from Whitefield, Bengaluru, to Hosur, Tamil Nadu. We got to catch a glimpse of all the electric action at the brand’s new plant, which went live last month.

An electric scooter rolls out almost every 4 minutes!

The new 123,000-square feet plant has been built at around Rs 130 crore. This facility has a single production line capable of churning out 110,000 electric scooters annually. That’s around 9,100 electric scooters every month. Co-founder Swapnil Jain reminisces fondly how Ather Energy has grown from being primarily a design company back in 2013 to manufacturing electric scooters. Of course, it took a lot of hard work and perseverance for the brand to reach where it is today. Swapnil says that back in 2018, it took nine days to make a single vehicle! It went up to 750 vehicles a month in 2019. And by the time the brand began manufacturing the Ather 450X in 2020, production was at 1,750 scooters a month.

It also explains why Ather wanted to keep the availability restricted to Bengaluru until 2019. After all, its first outlet outside of Bengaluru -- in Chennai -- opened only in July 2019. That said, the brand has grown fairly rapidly since then. Now, Ather Energy has a presence in 27 cities across 15 states. And with the new plant, we reckon Ather will be able to keep up with the added demand.

Ather Energy says both Ather 450X and Ather 450 Plus are completely made in India, except for the battery cells, which are imported from Korea. However, the cells are packaged in this facility, something that Swapnil and Ather as a brand are incredibly proud of. That’s because packaging the cells helps in having greater control over the battery pack’s performance. The new plant has two highly automated battery lines, capable of making 120,000 battery packs a year. The battery lines run parallel to the vehicle line, albeit in an enclosed space. This is because assembling the cells is sensitive work, requiring careful monitoring of humidity, dust levels and temperature. The battery pack is IP67-rated to ensure water resistance and dust proofing.

Ather claims it is the only electric vehicle brand in India to make its own battery packs. In fact, it has filed 13 patents on the design and manufacturing of the lithium-ion battery packs. Assembling the cells at such a fundamental level gives the brand the freedom to arrange and achieve the maximum energy density and find the right balance of range, performance, and thermal efficiency. This process leaves a better scope for optimisation than assembling the modules (a cluster of cells) into a battery pack or merely acquiring a ready-made battery pack.

And if you’re wondering why Ather doesn’t offer swappable batteries, the brand says that’s because its manufacturing cost is higher than making EVs with a fixed battery pack. There’s an additional engineering complication in swappable battery technology too. One will have to design a frame so that the batteries are accessible, without compromising on the structural integrity. This will also play a big role in pushing up manufacturing costs.

Actualising ‘Make In India’ with a touch of modernity

The vehicle line is more of an assembly line rather than an out-and-out manufacturing one. All the parts arrive from the brand’s supply chain management, most of which is consolidated in the southern parts of India. This helps in streamlining the logistics. However, there are also parts coming in from other parts of the country. The body panels, in particular, are made by a Hosur-based supplier. Also Read: Drool Over India’s 1st Transparent e-Scooter In Pics

The parts arrive at the factory for the first stage of quality control, called ‘Incoming Quality Control’. The dimensions and functionality of all the components are checked at random in designated labs. Parts like the electric motor and pulley are assembled at the sub-assembly stations. Then the mid-frame of the chassis and the rear shock absorber are put together. All the assembly-related parameters are also checked simultaneously for quality control. Then the battery pack is assembled at the first station of the assembly line, called ‘Zero Station’. Once the battery is done, the rest of the parts like handlebars, telescopic fork, and the front wheel are put together in sequence. The scooter moves further along the assembly line, where the electrical wiring and body panel assembly is done.

As part of ‘End Of Line Testing’, the finished electric scooter then heads for dyno testing, where the motor’s performance is checked. Other aspects of the scooter are also checked before sending them off to the logistics department. The facility is built on ‘Industry 4.0’ principles which warrant almost every aspect to be integrated and streamlined across the manufacturing network to ensure smooth functioning. This includes logistics, warehousing, quality checks, production, and even vehicle dispatch.

A green plant making green vehicles for a greener future

Ather Energy claims there is zero effluent generated from the factory. All the e-waste is handled by authorized recyclers. Thanks to the in-house sewage treatment plant and treated water circulation, there’s zero water discharge.

The plant offers around 300 direct jobs. Almost 4,000 employees will be trained over the next five years, with a total investment of Rs 635 crore. This should also provide decent job opportunities for the populace of an industrial town like Hosur. In around two years, there will be an additional 2.5 lakh square feet of space available should the need for expansion arise.