The MoveOS 2.0 is Ola’s shot at redemption, but is it enough to dethrone the Ather? 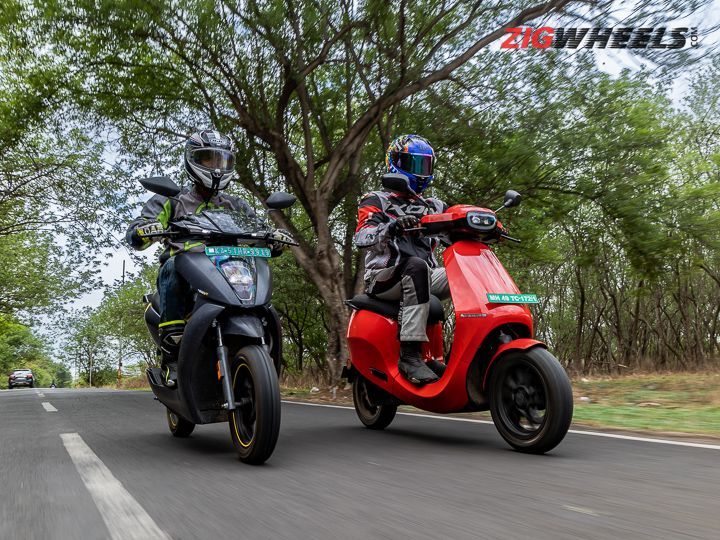 Ather Energy changed the way how the Indian audience perceived electric scooters. From its design and features, to its quality and features, everything oozed premiumness. And all of that from a company that no one knew about for the better part of last decade.

While a slew of products showed up in the recent years, none of them could match up to Ather, until the Ola S1 Pro arrived in 2021. On paper, the new e-scooter bettered the Ather in almost every aspect, but the reality was far from that. The company didn’t roll out some of the features promised, and the software had quite a few bugs. But with the MoveOS 2.0 OTA (Over-The-Air) update, Ola claims to have not just fixed these issues, but has also rolled out some new features. So, is the Ola S1 Pro now the new king of e-scooters? Let’s find out:

There’s no denying that the Ola S1 Pro’s design is quite pleasing to look at. The clean design, with the swooping line running from under the handlebar, all the way to its tail is the highlight of Ola's visual aura. This is complemented by the twin projector headlight with the LED DRL surround which gives it a unique identity. Throughout the days that I spent with the Ola, it grabbed attention everywhere, especially since our test unit was dipped in striking red paint.

The Ather 450X’s design is over four years old, and even though the e-scooter is a common sight in Pune, it still turns a few heads. That said, it is nowhere close to the attention the Ola S1 Pro garnered. But, while the Ola S1 Pro is pleasing from afar, a closer look is an eye-opener. There are inconsistent panel gaps all around, the paint finish isn’t up to the mark, and on our test vehicle, the plastic cladding around the speakers was already coming off. Meanwhile, the Ather 450X from our long-term fleet has been in top condition despite heavy usage by the entire team.

Design is subjective, and the quality issues could be addressed in the subsequent batches. But what really matters is how are these to live with?

Bigger battery, bigger motor, the Ola S1 Pro is clearly the winner on paper, and in our tests too. The Ola is almost 5 seconds quicker than the Ather 450X in the sprint to 80kmph. In fact, it even managed to cross the 100kmph mark in 15.66 seconds, the only e-scooter we’ve tested to manage 100kmph so far.

With the bigger 3.97kWh battery, of course the Ola S1 Pro beat the Ather 450X in our range test. But what might be baffling is the fact that the Normal mode returned more range than the Eco mode. Here’s why:

The Eco mode dumbs down the motor so much that there’s no pull until you hit 25kmph, and once past that, you’ll be limited to a top speed of VBox-tested 36kmph. So, you’ll find yourself with the throttle pinned all through the ride. On the flip side, the Normal mode has enough initial pull to keep you at manageable city speed without having to keep the throttle maxxed out.

Do You Really Need To Reinvent The Wheel?

The Ather 450X falls short in terms of performance and range, but it makes up for it with the rewarding riding experience. You don’t have to relearn anything to get used to riding the Ather, which is not the case with the Ola.

Firstly, there’s the lack of a physical key or even a key fob in the Ola. Though the geeky screen and phone unlock is cool to brag about, it isn’t entirely convenient. There were times when the screen and the app froze, and the only option was to wait till it was back in action. Then there’s the process of connecting your phone to the scooter. The app requires signing in through your mobile number and allows only one user at a time. So, every time a family member or a friend takes your Ola out, you’ll have to share the OTP to give them access to the app.

There’s also this pronounced delay in throttle response of the Ola. It takes noticeable time to respond to your throttle input, when accelerating or decelerating. Furthermore, the S1 Pro cuts current to the motor at the slightest tap of the brake levers. So, taking U-turns or tackling moving traffic with ease will take some time getting used to. Then there’s the switchgear. Instead of a toggle, there are individual buttons which are an ergonomic nightmare and lack tactility.

On the flipside, riding the Ather 450X is just like riding any other scooter. The throttle response is predictable, you can modulate the brake and throttle in tandem, and lastly, you are not on the mercy of electronics and actuators to simply unlock your e-scooter and move it around. What’s that mantra we’ve all heard, Keep It Simple S… you know the rest.

How Well Do They Handle The Urban Jungle?

The Ola’s fancy front suspension and the offset horizontally-mounted monoshock is quite intriguing, but works surprisingly well for most of the part. While the suspension does absorb undulations and small potholes, it is the crashiness over larger obstacles that we found displeasing. Your wrists and back bear the brunt if you hit a big one. The suspension, combined with the tubular chassis and the beefy 12-inch tyres inspires confidence when you hit the corners with the Ola S1 Pro.

But the aluminium frame and the skinny tyres, coupled with the lighter kerb weight makes it easy for riders to manoeuvre the Ather through fast traffic or corners. Even though the Ather’s suspension is set a bit on the firmer side, compared to the Ola, it manages to ride out the bumps with equal ease. The ride is more predictable and flat. And while the S1 Pro’s soft seat also helps in damping the impact of the bumps, we much rather prefer the Ather’s thicker and firmer cushioning as you don’t sink in too much, thus leading to less fatigue after spending nearly a hundred kilometres in the saddle.

Braking is where both e-scooters left something to be desired. Though the braking performance itself isn’t a problem, the calibration of the Combined Braking System (CBS) is. The rear tends to lock up easily on both, which can be unnerving at times, especially on the Ather.

The long list of features on the Ola S1 Pro are impressive on paper, but there’s a caveat to almost all of them. Meanwhile, the Ather 450X has a comparatively shorter list, but they function as promised.

For starters, the Ather 450X can be used in Warp mode until you drain the battery down, whereas, the Hyper mode on the Ola can be used for a few kilometers before thermal heat management kicks in and the BMS automatically shifts to Normal mode to preserve the electricals. Furthermore, once the range drops to 30km, the Ola can be ridden only in Normal mode, and within 7km, it switches to Eco mode to get you home. The problem with this is, if you have to ride an incline to get home, the Eco won’t help your cause, and your option is to either get off and push it while keeping the throttle pinned or charge it somewhere to bring it in Normal mode.

Then comes its music system. The onboard speakers are loud, and the controls on the switchgear are easy to use, but the e-scooter ends up playing music every time you switch it on, irrespective of whether you had paused it before switching it off.

Both the e-scooters feature navigation and are fairly easy to use. However, the standout feature of the Ola S1 Pro is the cruise control. It works between 20-80kmph in Normal and Sport modes only. It works flawlessly and adapts as per the changing the terrain or gradient.

Time For The Ather 450X To Hand Over The Crown?

The Ola S1 Pro is definitely a promising proposition. Its performance and range is unmatched, and the geeky features definitely appeal to the Gen-Z, all while being Rs 13,000 cheaper than the Ather 450X in Pune. While the Ola impresses on most accounts, it fails to connect with the rider, something the Ather does effortlessly.

Ola’s weird throttle and brake calibration, coupled with the quality issues leave you disappointed. But these are some things that could be fixed in subsequent batches. So, is it history repeating itself? Has a new company beaten an established one at its own game? Well, partially. Ola is the superior one at the moment, but Ather is already gearing up to introduce the 450X with a powerful motor and bigger battery. Oh, and with the Simple One coming pretty soon as well, interesting and electrifying times await us.