The 2019 Wagon R is bigger and more powerful than its predecessor now, but how does Maruti’s tallboy stack up on paper against its arch rival Hyundai Santro and others? 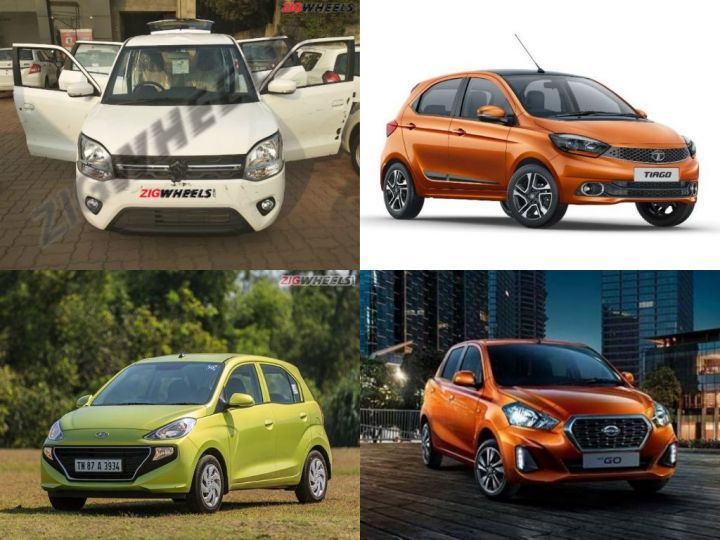 Maruti’s old workhorse, the Wagon R is getting a makeover for 2019. It’s now bigger, has a longer wheelbase and also gets a more powerful 1.2-litre K-series engine as an option. Add to that infallible dependability and more creature comforts, and you have another formula for success. However, Hyundai has resurrected the Santro in India, which has heated up competition in the compact hatchback segment.

And gone are those days when it was just a two-horse race, Tata’s Tiago and Maruti Celerio have also carved their own space in the segment and there is also the value for money, Datsun Go facelift, that the new WagonR has to contend with.
Expected to be priced between Rs 4.3 lakh to Rs 5.6 lakh (ex-showroom), the WagonR will be launched on 23 January. Without further ado, let’s see if it has what it takes to go head on with its major rivals, on paper.

Let’s kick it off with the biggest and most obvious change on the upcoming WagonR. The Maruti tallboy measures 19mm longer and 125mm wider than the outgoing model, and the wheelbase has been been stretched by 35mm to get it on par with the Ignis. In fact, at 3655mm, it is even longer than the old-gen WagonR VXi+ (formerly known as Stingray), which was longer than the old-gen’s lower-spec variants in the first place.

Despite being longer and wider than its predecessor, the new WagonR comes in pretty low on the pecking order against its rivals when it comes to sheer size. The Datson Go is the longest car of the bunch, while the Tata Tiago is the widest. However, the new WagonR does score on height and is the tallest. Additionally, it has the longest wheelbase of the lot as well which is likely to translate into a more spacious and airier cabin.

When it comes to engines, Hyundai’s Santro and now the WagonR are the only cars available with four-cylinder engines. While the Hyundai is powered by a modified 1.1-litre Epsilon engine, the WagonR gets two options: the old 1.0-litre three-pot which makes 68PS/90Nm and the new 1.2-litre K-series motor good for 83PS/113Nm. This is the same engine as the one powering the Maruti Swift and the Ignis.

However, when it comes to sheer power, the Tata Tiago, despite its three-cylinder motor edges past all competition with 83PS, and it’s also the torquiest. The Datsun Go makes a healthy, 104Nm of torque, but suffers in power output at just 68PS. Overall, when it comes to engine performance, the Wagon R comes a close second, thanks to the addition of the 1.2-litre K-series engine.

Transmission duties are performed by 5-speed manual gearboxes on all cars and barring the Datsun Go, all come equipped with proprietary AMT gearboxes as well. The Datsun GO loses some brownie points for being the only car in the comparison to not feature an automatic transmission at all.

All cars in the comparison here come equipped with plenty of features and safety kit on board. While we don’t have the complete equipment details of the new WagonR, courtesy all the leaks, we do know that it will be offered be offered in three trim levels: L, V and Z. While the 1.0-litre engine will only be available in the LXI, VXI and VXI AGS (auto-gear shift) variants, the new 1.2-litre engine will be offered on VXI, VXI AGS, ZXI and ZXI AGS trims, thus taking the total number of variants to seven.

As far as features are concerned, the WagonR gets the steering wheel from the Ignis (with controls for the audio and calls), and a new instrument cluster. Topping things off is the new touchscreen infotainment system. This, however, does not look like the 7-inch Smartplay system we are used to seeing in other premium Marutis like the Ignis and the Baleno. The one spotted in the leaks features a different layout and could be a cheaper alternative to the Smartplay system. Still, we expect the new Wagon R to come with Android Auto and Apple CarPlay compatibility, at least on the top trims.

With respect to competition, the Santro, in line with Hyundai tradition, comes loaded with the most number of features. The Hyundai Santro is the only car here to be offered with a rear parking camera. However, the Datsun GO steals the thunder from the Santro by offering almost every feature including dual front airbags, ABS+EBD+BA, rear parking sensors, driver-side seatbelt reminder and escort headlamps as standard across the range rather than limiting them to the higher trims. Recently, the Tiago also got a snazzier XZ Plus trim with a new touchscreen system to bring it on par with competition.

As far as safety is concerned, the top-spec WagonR will get dual airbags. And just like its closest rival, the Santro, the new WagonR will also have a driver’s airbag as standard on the base variants. It will also get ABS with EBD, rear parking sensors, a seatbelt reminder for the driver and front passenger, and a speed alert system as standard across all variants.

Show Me The Money?

When it comes to pricing, the Datsun GO may seem the most value for money offering here, considering it offers almost everything the Santro does, but at a much lower price. However, the build quality and premiumness on the GO is not at par with Santro. The Tiago is also very competitively priced and has several premium features like projector headlamps, segment-first 15-inch wheels and more. The Celerio, on the other hand, is now showing its age and has to do a lot of catching up in terms of both features and pricing.

The new WagonR, when launched, could give the Santro a run for the money in terms of both features and build quality. Additionally, with its expected starting price likely to be at par with the outgoing model (around Rs 4.3 Lakh ex-showroom), the new WagonR will definitely offer value for money.

While we try to get our hands on all five hatchbacks for a thorough comparison, stay tuned to ZigWheels for our first drive review the WagonR to see if it can remain the most sought after compact hatchback in the country or not.