After a long wait, the Tata Altroz will finally be unveiled in December with a launch set to happen in early 2020 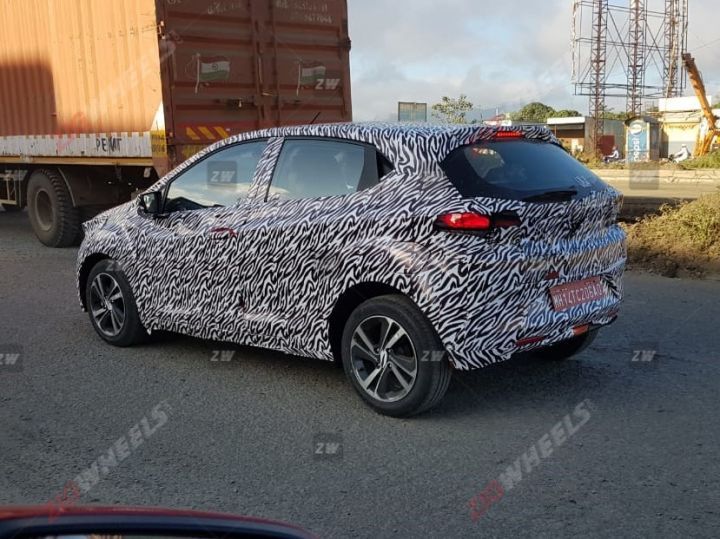 Tata’s much anticipated premium hatchback, the Altroz, has been spied testing in its production guise just ahead of its unveil in December. The test mule features a fair amount of camouflage, but we do know how it will look like thanks to the prototype that Tata showcased at the Geneva Motor Show as well as images and videos from numerous spottings and teasers. The hatchback spied here is probably undergoing its final phase of testing and calibration before its launch in early 2020. We also know that the Altroz will be powered by a choice of three BS6-compliant engines and feature a premium cabin loaded with features. The hatchback, when launched, will pose a threat to the Volkswagen Polo, Maruti Suzuki Baleno, Toyota Glanza, Hyundai Elite i20, and the Honda Jazz.

The production-spec Altroz looks in tune with the Geneva Edition car with a shark nose like front end. The front end also features a raked honeycomb mesh grille that is connected to the slim headlamps. The upper portion of the bumper sports fog lamps similar to the split headlamp setup that is now becoming popular on SUVs The lower window line and the rear end features a black section which adds character to the design. All in all, from what we’ve seen so far, the Altroz is a sporty looking hatchback thanks to Tata’s Impact 2.0 Design. Moreover, the hatchback also features some interesting elements such as front doors that can open up to an angle of 90 degrees.

Older spy shots of the hatchback have given us a fair idea of what to expect inside the Altroz. A premium looking interior finished in grey and black with elements like a floating infotainment screen, ambient lighting, Android Auto, climate control, a semi-digital instrument cluster like the Harrier, a digital multi-info display,  cruise control, and automatic headlamps are some of the highlights. Expect safety features such as dual airbags, ABS with EBD, rear parking sensors with camera, high-speed alert as well as driver and co-driver seatbelt warning as standard.

We expect Tata to offer the Altroz with three BS6-compliant engine options in the Altroz when it debuts. The petrol options include the 1.2-litre naturally aspirated unit from the Tiago and a 1.2-litre turbo-petrol motor from the Nexon, albeit in a detuned state. The former produces  85PS and 114Nm while the force-fed motor is expected to put out around 100PS and 140Nm. The diesel engine is expected to be the 1.5-litre unit that does duty in the Nexon. Gearbox options will include a 5-speed manual and AMT for the 1.2-litre NA motor, and a 6-speed manual and AMT for the other two. These powertrain options are likely to be priced between Rs 5.5 lakh to Rs 8.5 lakh (ex-showroom)

Tata is also cooking up an electric version of the Altroz which will be powered by same Ziptron powertrain that’s set to debut in the Nexon EV on December 16. The Ziptron powertrain is likely to offer a real-world range of 300km in the Nexon EV. Expect the all-electric SUV to carry a price tag ranging between Rs 15 lakh and Rs 17 lakh (ex-showroom).