Now that both the production-spec models based on the Renault-Nissan’s new CMF-A+ platform have been unveiled, here’s how they differ 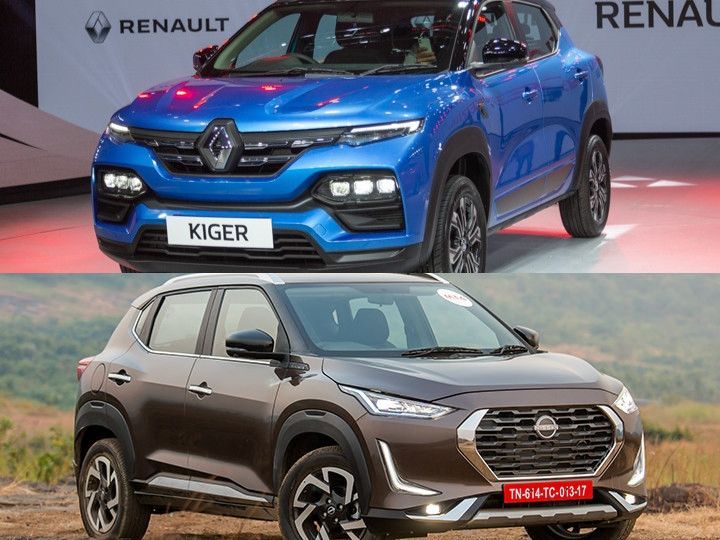 Renault India recently took the wraps off its first sub-4 metre SUV. The Kiger wears a bold design, plenty of features, and offers two petrol engines. Since it is based on the Renault-Nissan’s new CMF-A+ platform, it's essentially a Nissan Magnite in a Renault dressing (considering Magnite made it to the market first). Question is, how does the Kiger stand out from the Nissan Magnite? We’ve previously compared their concept designs, and now, we can finally weigh up the two SUVs in their production-spec form. Here’s how they differ:

The two sub-4 metre SUVs feature a muscular front that helps them stand out from the crowd, but they do it via their own design philosophies. The Renault Kiger boasts a grille similar to that of the Triber and a split LED-headlamp setup resembling the Kwid’s. Nissan Magnite, on the other hand, utilises a larger single-piece grille inspired by the Datsun models.

A closer look at the front end, and you’ll notice Renault and Nissan have distinct LED DRL designs. In the Kiger, the DRLs are placed horizontally, merging with the grille. In contrast, the Magnite features vertically placed L-shaped DRLs that double up as brightly lit-indicators, which lend a premium look to the subcompact crossover.

It is difficult to find much of a difference between the two, considering both feature squared-off wheel arches and a crossover-like silhouette. That being said, the Magnite adds a silver finish around the side skirts. Both models offer roof-rails and dual-tone roofs, but the Kiger’s have a more rugged design.

A closer look at the silhouette, and you’ll notice the Kiger doesn’t have a rear quarter glass, unlike the Magnite. Instead, it has a narrower pillar area and sharply raked rear windscreen, further accentuating the Kiger’s crossover-like profile.

Both SUVs utilize a set of 16-inch dual-tone alloy wheels with 195/60R16 tyres. But they get their own unique styling bits. While the Magnite sports a turbine-like design, the Kiger brings a detailed, Duster-inspired style.

At the back, the two SUVs look distinct from each other. The Kiger’s design is more sporty, with detailed C-shaped LED tail lights and a more aggressive spoiler. The Magnite, on the other hand, has a subdued yet sharper rear end with wraparound incandescent bulbs instead of LEDs. The two models also get a dual-tone rear bumper for a meaner look.

Heading inside, Renault has clearly given the Kiger its own identity. Differences with the Magnite show up in the touchscreen infotainment system placed higher up in the dashboard, with the AC vents placed below it. While the steering wheel is similar, it gets a flatter horn pad, different seat upholstery, and clean graphics for the digital instrument cluster compared to the Magnite. While the Magnite gets trendier, Lamborghini-like AC vents, the Kiger features a  tambour door in the centre console. A silver finish running along the Kiger’s dashboard completes the differences.

At 405 litres, the Renault Kiger offers more boot space than the Nissan Magnite’s 336 litres.  Folding down the rear seats takes the Kiger’s total volume to 879 litres compared to the 690 litres on the Magnite.

Considering the two SUVs are based on the same platform, it's no surprise that the both share a 72PS/96Nm 1.0-litre petrol engine and a 100PS/160Nm 1.0-litre turbo-petrol motor. But here’s where the similarities end. While a 5-speed manual is standard across all engines, the Kiger will have an AMT automatic transmission option for the 1.0-litre naturally aspirated motor.  A CVT automatic gearbox is offered for the 1.0-litre turbo-petrol engines in both the SUVs.

Renault is likely to launch the Kiger in March, at a price similar to that of the Nissan Magnite, which retails from Rs 5.49 lakh to Rs 9.97 lakh (ex-showroom). Both rival the Kia Sonet, Hyundai Venue, Toyota Urban Cruiser, Maruti Vitara Brezza, Ford EcoSport, Tata Nexon, Mahindra XUV300, and the upcoming Tata HBX.