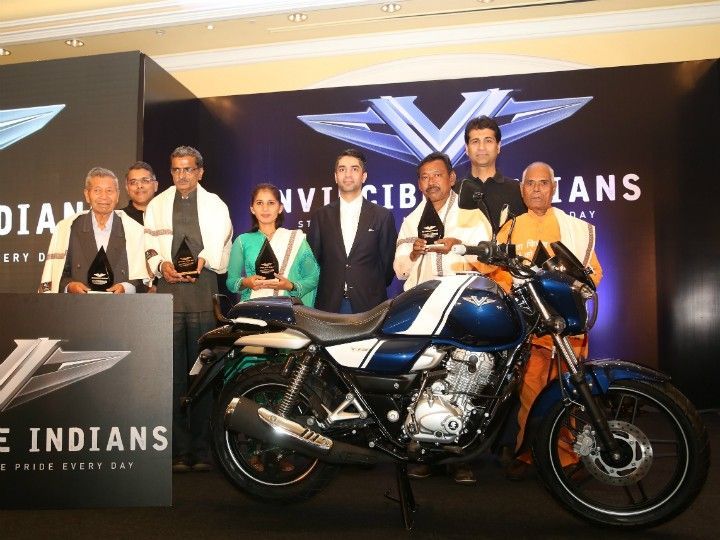 Bajaj Motorcycles has launched a new initiative – ‘Invincible Indians: Stories that Invoke Pride Everyday’ – in association with its motorcycle V15, the bike that carries metal from the invincible INS Vikrant, India’s first aircraft carrier. The drive is to bring out the stories of ordinary Indians who have performed extraordinary acts to serve society. So, the home-grown bikemaker felicitated five such ‘Invincible Indians’ in the presence of Abhinav Bindra, India’s first individual Olympic gold medallist. Bajaj V also released five videos that showcased the inspiring stories of these everyday heroes.

The five inspiring men and women felicitated by Bajaj are:

Chewang Norphel: Created 15 artificial glaciers in Ladakh to solve the perennial water crisis; he was also awarded a Padmashree in 2015.

Bipin Ganatra: Helped rescue people from more than 100 fires in Kolkata and is also recognized as a volunteer firefighter by the Kolkata Fire Department.

Omkar Nath Sharma: Travels across NCR to collect medicines from people who no longer need them, and distributes them to clinics and hospitals who serve the poor.

Vijaylaxmi Sharma: Leads a movement to abolish child marriages in villages in Rajasthan.

Karimul Haque: Converted his bike into an ambulance and offers 24X7 ambulance service for free.

Speaking about the initiative, Abhinav Bindra stated, “I am extremely glad that Bajaj V has taken this noble step in recognizing these individuals who have dedicated their lives in doing extraordinary social work. Many a time, such heroic acts go untold and these heroes fade away in the pages of history. I am truly proud to be associated with this endeavour and urge every Indian to come forward in supporting it.”