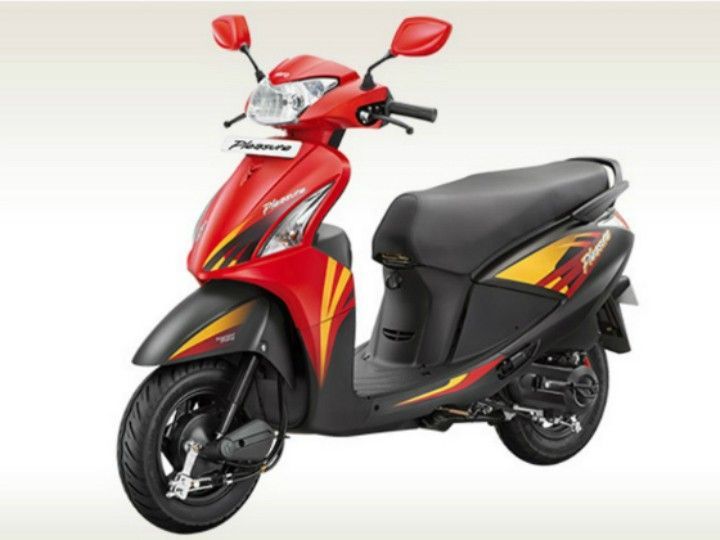 Hero MotoCorp has launched the updated model of their popular scooter – the Pleasure; a scooter targeted towards the fairer sex. Changes include the incorporation of a BS-IV compliant engine, Always Headlamp On (AHO) feature, new dual tone body colours along with new body graphics. The scooter gets three dual-tone and four single-tone colour shades which include – Matt Grey and Red, Matt Grey and Yellow, Matt Grey and White, Pearl White, Fiery Red, Bold Black and Matt Grey. It gets Integrated Braking System (IBS) which reduces the braking distance by 15 per cent, a charging socket mounted in the front storage compartment, boot light in the under-seat luggage box, six-spoke alloy wheels and a side-stand indicator.

The Pleasure is powered by a 102cc engine which develops 7PS of power @ 7,000rpm and a peak torque of 8.1Nm @ 5,000rpm. The claimed maximum speed of the scooter is 77kmph. It also gets bottom-link with spring-loaded hydraulic dampers at the front and a single-unit swing spring-loaded suspension at the rear. Braking duties are done by 130mm drum brakes both at the front and the rear integrated with the IBS. It gets 90/100 R10 tyres both at the front and the rear. Ground clearance is 125mm, fuel tank capacity is 5 litres and the scooter weighs 101kg.

The scooter is now available at Rs 65,140 (on-road, Mumbai) which is around Rs 1,000 more expensive than the previous BS-III version. It takes on the likes of the TVS Scooty Zest and  Honda Activa i.