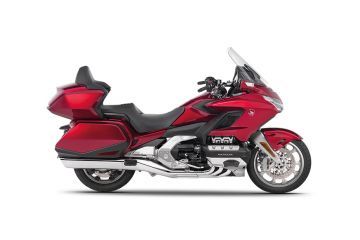 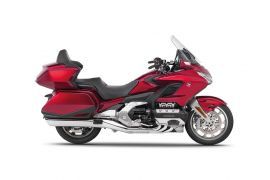 About Gold Wing Specs and Features

Honda Gold Wing price starts at Rs.27.77 lakh (Ex-Showroom, Delhi). The motorcycle is powered by a horizontally-opposed, liquid-cooled, 6-cylinder, 1833cc engine that gets aluminium cylinder sleeves with a shorter and stiffer crank. Overall, the engine is more compact and the starter and alternator are integrated into one unit. The motor produces 126PS of power at 5500rpm and 170Nm of torque at 4500rpm, which is 7PS and 3Nm more than what the earlier Gold Wing produced. The new Gold Wing also gets an all-new 7-speed Dual Clutch Transmission (DCT), which is unusual on motorcycles, as its something only seen in sports cars. All you need to do is shift gears by c licking the two buttons on the left switchgear. Besides this, the transmission setup doesn't just get a reverse gear but also a ‘Walking’ mode, enabling the ride to park the hefty tourer easily. Honda claims that the 2018 Gold Wing is the narrowest in its almost 4-decade long history. Suspension duties on the front is managed by a double wishbone unit, which is a pair of A-arms with a single shock and spring. Whereas the rear gets a monoshock damper. Braking is handled by 320mm disc brakes at the front and a 316mm disc at the rear. Both with combined ABS system. The front gets 18-inch wheel while the rear gets a smaller 16-inch wheel. The Honda Gold Wing’s Tour version weighs in at 379kg (kerb) while the standard one weighs 364kg. The seat height stands at 745mm and the ground clearance is 130mm, which is at par with any other big tourer out there.

Q. Please tell the performance of goldwing?
Q. Is Goldwing better than Hayabusa or Heritage Softail Classic? Let me know the maintenance cost per year. - Gold Wing?
Q. Which is the best bike out of these three Honda Goldwing, Heritage Softail classic or Hayabusa - Gold Wing?
Q. 1. Servicing of gold wing in chennai or any other part of India.2. Fuel type for the bike and its mileage. 3. Practical handling on Indian roads with regards to bad roads, sandy stretches, engine heat Iissue, riding in traffic etc. 4. Cleaning and maintaining the bike.
View More Questions All Gold Wing Questions and Answers