By stepping up to the more fiercely competitive 125cc scooter segment, does the youthful Yamaha scooter actually prove to be a great choice? 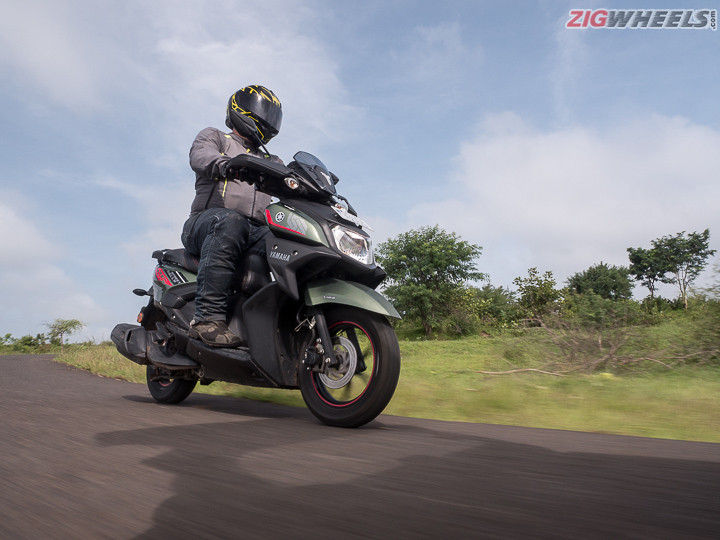 BS6 seems to be the keyword for automobile reviews nowadays. And sadly, emission compliance usually comes at the cost of performance. That inherently makes us feel a little sad that our desired two-wheelers are no longer going to be as quick as they were. Or will they? You see, manufacturers like Yamaha have a different take. At least for its scooters. The Japanese manufacturer has decided that it no longer wants to play in the smaller 110cc segment. It has put on big boy pants and will now offer only 125cc scooters.

We have already checked out the company’s stylish offering -- the Fascino 125 (head here to read the review) -- and came back impressed. But what about the sporty one - the Ray ZR 125? Does it make a great case for itself?

There is no denying that the Ray ZR 125 looks a bit too much. The styling is definitely in your face, much more than what it was on the older scooter. Yamaha’s design team sure seems to have gone overboard with the edges and panels for the Ray ZR, giving it a very oddball look. Not everyone would be a fan with the way it looks but if there is one thing that goes in the favour of the scooter is that it is quite distinctive and doesn’t blend into the plethora of conventional designs.

The version of the scooter that we have here is the Street Rally trim, which gets block pattern tyres, knuckle guards and rim tapes. There is some sound logic behind kitting the scooter with these type of tyres, which we will get to later on, but the knuckle guards simply serve an aesthetic purpose. So no trail bashing with the RayZR, understood?

After dropping their incredibly high quality standards on bikes like the FZ Fi, FZ25, R15 v3 and MT-15, the RayZR feels so much better put together. The quality of plastics used has improved. The switches do look a tad bit conventional on this not so conventional looking scooter but feel decent to operate.

Here’s a list of features that you get on the scooter as standard across all variants: remote boot opener. We kid you not, that’s it. LEDs? Not to be found on any lighting systems aside from the small ‘T’ shaped bit at the front that is too small to be deemed as a DRL. Not looking down on halogen units, as long as they do their intended jobs but that’s not the case either. It fails to light up dimly lit roads. The throw isn’t intense and doesn’t have a wide spread either.

Brake lock clamp? Nope. Digital console you ask? It is only found on the disc and Street Rally variant, not on the base drum trim. And even there you only get a few useful bits of info like a speedometer, an odometer, a trip meter and a fuel gauge. Having a tachometer on a scooter makes zero sense and there is a large vacant space on the right that Yamaha could have utilised better. It could have offered more data like perhaps a clock, an average fuel efficiency indicator or a range indicator.

Even the underseat area has no storage light or USB charging socket offered as standard. You can opt for the latter bit by paying Rs 770 extra but in this day and age, it should have been standard on a scooter targeting the younger generation. And finally, there is no external fuel filler cap, so you have to access it the old fashioned way. Why Yamaha?

So, the Ray ZR 125 will not wow you with your features but what it will blow you away with is its lightness. It is simply magical. Instead of gaining weight by going up the cubes and fitting emission compliant bits, the Ray ZR 125 weighs 4kg lighter than the older 110cc scooter. At 99kg, it is the joint-lightest scooter in its class with the Fascino 125.

The practicality quotient really jumps when you combine the lightness with its fairly low seat height. Reaching the floor for a rider of average height or even slightly shorter rider won't be a bother. Plus, moving around in the parking lot or propping it up on the main stand won't be an issue whatsoever. Even taller riders won’t have to stress about space because the handlebars are nice and high. Despite being 5 feet 10 inches tall and wearing thick soled riding boots, the bars never ended up fouling with my knees when taking sharp turns.

Yamaha could have designed the floorboard space better though. Neither is the Ray ZR 125 the smallest scooter in the class nor does it have the shortest wheelbase. Still, the packaging of the scooter has been done in such a manner that we can’t help but feel a bit restricted.

Quick Off The Line

Yamaha’s new 125cc mill might not be as powerful or torquey other players but being the lightest pays dividends. The Ray ZR 125 bolts off the line posting some seriously quick acceleration times. It is almost a second quicker to 60kmph and nearly 1.5 seconds quicker to 80kmph than the TVS NTorq 125 BS6. This off the line spurt helps it reach 80-85kmph fairly soon post which the power trails off.

While it romps ahead in outright acceleration, and despite the linear power delivery of the motor, you can breeze past slow moving traffic with a simple twist of the throttle.

If you were expecting typical Japanese levels of refinement from Yamaha’s new mill, then you might be disheartened. The new two-valve mill isn’t the smoothest of the lot with a mild buzz felt through the floorboard. You could have overlooked it had the exhaust note been throaty and racy but that is not the case either.

Where the Ray ZR shares something similar to one of its compatriots is the silent start function. Yamaha has followed in the footsteps of Honda and introduced its own alternator starter motor system called Smart Motor Generator system. There is none of that typical kharr kharr sound present at startup, just smooth and immediate. It isn't as subtle as the system on the Honda Activa 125 but still it is a cool feature to have.

And then there’s the idle start stop. When you halt at a signal, the engine stop start system kills the ignition within a couple of seconds, earlier than what you would experience on the Hero scooter. Once the light goes green, a slight dab of the brake lever and the slightest of throttle inputs brings the motor back to life.

Not Only Quick But…

...frugal too. In the city, with the engine stop start system helping out when necessary, the Ray ZR managed to deliver class leading fuel efficiency of 66kmpl. Less weight means less stress on the engine to get up to cruising speeds, and the linear power delivery aiding. On the highway, it isn’t bad either, matching the NTorq’s fuel efficiency figure. The slightly smaller fuel tank might force you to stop for fuel sooner but the 20-25km deficit in range will not be a deal breaker.

The Ray ZR 125 is not only fun in a straight line but also makes for a worthwhile hooning scoot. It is so light that you barely need any effort to chuck it into bends. And when leaned over, it doesn’t feel as squirmy as it did earlier. You have the larger 12-inch front wheel and long wheelbase to thank for lending the extra stability.

While all variants of the 125cc scooter get Maxxis tyres, the Street Rally gets block pattern units. They hold their own quite well, even in slightly slippery situations. The same could be said about the regular tyres as we experienced no issues with them on the Fascino.

The suspension components are new with Yamaha now opting for a more plush setup. The ride isn’t jarring like it was on the older 110cc scooter. There is an initial bit of firmness from the front telescopic fork the ride improves as the speeds get higher. The monoshock is very softly sprung. It does get a little wallowy when you tackle large speed humps with gusto or if you have a rather large pillion on board. So, you do experience that bounciness but that settles down fairly quickly as well, helping you regain composure with ease.

The braking units on offer are one of the best we have experienced on any 125cc scooter so far. While stopping distances are nearbout the same as its rivals, it is the lever feedback and the progressive nature of the system that instills confidence when braking suddenly. What does happen though is that you often end up sliding ahead due to the raked seat design. The texture of the seat too doesn’t stop you from sliding about and we could do without having to constantly move about to get back into our normal seating position.

You could definitely say so. Stepping up to the fiercely fought 125cc scooter segment does seem to be the right choice for Yamaha’s sporty scooter. It might not have stepped up on the features front, which is what the millennial folk would desire from their ride, and we wished for slightly better refinement levels. But all of this seems small compared to the feeling from behind the handlebars. Its lightness plays a big part in it scoring high on low-speed manoeuvrability and fuel efficiency. Plus, it is quite comfy too.

Most importantly though, it now finally has the punch to match the looks of a sporty scooter. And, when you see that it is priced on par with some of its key rivals, it's clear that by stepping up Yamaha has made the Ray ZR a better and more enjoyable scooter that can worry its rivals.