Polarising design aside, there’s a lot more than what meets the eye in the new MT-09. We explore the nitty gritties 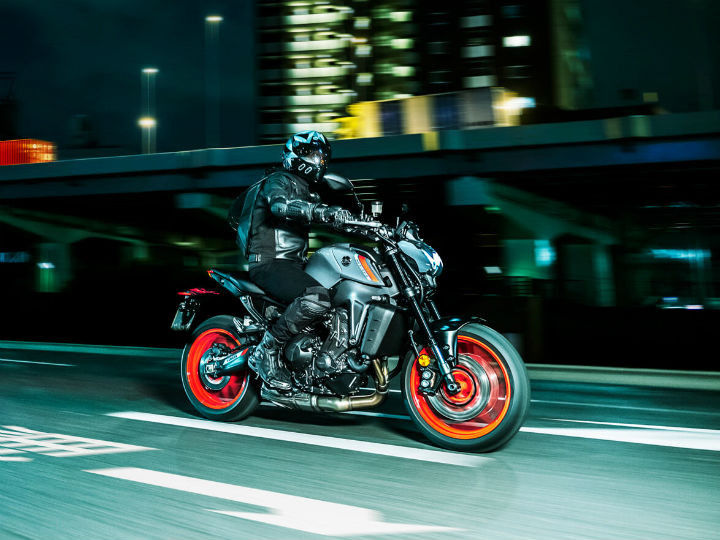 Shortly after teasing the super-naked, Yamaha unveiled the 2021 MT-09 for the European market. The new Yamaha MT-09 is Euro 5 / BS6-compliant, which means Yamaha could launch it sometime in the future. After all, the company already retailed the previous-generation MT-09 up until India graduated to BS6 emission regulations. Here are all the details you need to know about this sub-litre-class naked:

Gets a brand new (not-so-lovable) face:

The designers at the triple tuning fork have given a major aesthetic overhaul to the 2021 Yamaha MT-09. Gone are the aggressive, angular, sleek headlamps. Instead, you get a compact LED headlamp cowl with two slanted LED DRLs. In contrast, the new frame (more on that later) adds a lot more butchness to the sides, which are further accentuated by the large tank panels above and the large blacked-out radiator cover below the frame.

Along with the new frame, the subframe is different too. The new rider’s seat appears to be roomier than the previous generation bike whereas the pillion seat looks like it is still small enough to be suitable for short rides only. The 2021 model features a traditional tail-mounted license plate holder. In our opinion, the rear tyre-hugger-mounted licence plate holder in the older bike looked a lot sportier. We feel the overall design language has a hint of Chinese genes to it rather than the futuristic, razor-sharp, clearly Japanese design lines in its predecessor.

Powering the 2021 Yamaha MT-09 is a new Euro5 / BS6-compliant 889cc liquid-cooled 3-cylinder crossplane engine. The extra 49cc has resulted in a total power output of 119PS at 10,000rpm. That’s 4PS more than the smaller Euro 4-compliant 847cc engine in its predecessor. Even the peak torque has gone from 87.5Nm at 8500rpm to a healthier 93Nm at a lower 7,000rpm, ensuring even better low-end usability. Even the 6-speed transmission with assist and slipper clutch have slightly longer ratios for the 1st and 2nd gear. While the norm is that cleaner powerplants are generally heavier owing to more emission restrictive components, Yamaha has managed to shave off 1.7kg compared to its predecessor (including the weight of the exhaust). And that’s not all, Yamaha claims the new engine also offers 9 percent better mileage thanks to a new fuel-injection system. Oh, and there’s a standard bidirectional quickshifter too.

Yamaha has blessed the 2021 MT-09 with a plethora of electronics to keep the rubber side down. In a first for its range, the motorcycle comes with a proper 6-axis Inertial Measurement Unit (IMU). This works in conjunction with the new 3-level lean-angle-sensitive traction control system, slide control system, front wheel lift and brake control system. In our experience, the older-generation MT-09 was borderline lethal, so we hope the new electronics package makes the motorcycle a little more newbie-friendly.

To command all the bike’s functions, there’s a new 3.5-inch full-colour TFT instrument cluster. There’s no smartphone connectivity but it does get a set of switches to easily navigate between different features. Heated grips are also available as an accessory.

Built on a new foundation too:

The 2021 Yamaha MT-09 is built on a new cast aluminium diamond frame with a new 250g lighter swingarm. Yamaha also managed to shave off a massive 1.5kg with the new aluminium swingarm. The older model used a heavier steel unit. In total, the chassis is 2.3kg lighter than the previous version, helping the motorcycle tip the scales at 189kg kerb, which is 4kg lighter than the 2020 version. Thankfully, the fuel tank capacity has remained unchanged at 14 litres.

The frame is suspended on a pair of new KYB inverted fork adjustable for compression, rebound as well as preload. Even the rear monoshock linkage has been changed and the motorcycle runs on a new KYB unit. To go with the lighter chassis and more powerful heart, the new MT-09 gets better braking hardware. In fact, it is the second Yamaha to get the YZF-R1-derived Nissin radial master cylinder. It is linked to a pair of 298mm discs up front. The rear end gets a 245mm disc. Interestingly, despite packing an IMU, there’s no cornering ABS on offer yet. Expect Yamaha to include this in the next generation.

The 2021 Yamaha MT-09 will reach European dealerships in March 2021. Expect the price to be announced early next year. In India, it could be launched in mid-2021 and will go up against the Kawasaki Z900, Triumph Street Triple R, and the upcoming KTM 890 Duke R. In the UK, the 2020 model retails at GBP 8,747 (around Rs 8.38 lakh). So expect the 2021 iteration to command a price tag of an equivalent of around Rs 11.50 lakh considering the kind of kit it offers over its predecessor.