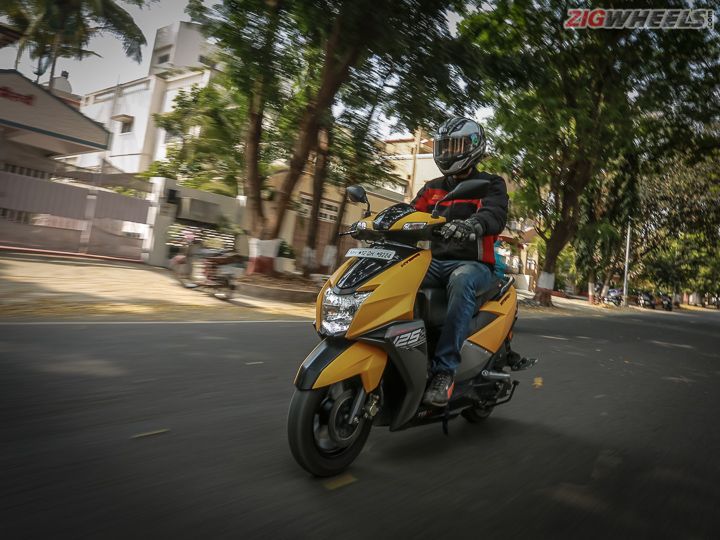 Yes, the TVS NTorq is unanimously the best scooter in the Zig long-term garage and it might not be a stretch to call it the best in its segment either. After having spent more than half a year with it, I'm glad I was quick to raise my hand when the keys for the NTorq were up for grabs.

I had heard everyone rave about it and it had won all of our comparos too. When I actually did get the scooter though, it didn’t feel as sprightly as it had when we first got it. The front brake felt choppy, the pick-up was lazy and cold starts were a persistent problem. One service later, however, most issues were ironed out. But more on that later.

The thing with this TVS is that you always want to ride it like you stole it - it is eager to tip into corners, feels planted through them and is pretty flickable too. Thanks to which, I actually looked forward to the traffic rather than avoiding it. You see, flitting through it or getting off the line first are two cheap thrills I enjoyed on my way to work everyday.

It even endured Pune monsoons with me and was a boon to have because of a scooter’s inherent advantage over motorcycles. But I really wish TVS had offered better rubber. Don’t get me wrong, the 100x80x12 front and 110x80x12 rear TVS Remora tyres offer immense confidence while leaning into corners, but lack grip in wet conditions. In fact, I found the rear more than happy to step out when I opened the throttle with urgency, on wet patches of the road. And I would’ve never thought I’d say that for any scooter.

Speaking of the rear, the suspension is cushy and my colleague didn't complain on his occasional lifts to work, thanks to the large and comfortable seat too. My backpack didn't need to eat into pillion space either and always rested on the floorboard. I found the underseat storage quite practical too, not just because of its storage capacity, but also because of a USB charger and an LED light.

During the time it has been with me, the NTorq has undergone its third service and will soon be due for another one. As mentioned above, the second service fixed issues like a slow pick-up, choppy front brake, soft rear brake and cold-starts, although the latter two resurfaced eventually. It also included cleaning the air filter. Over the course, the brakes haven't aged very well though. While the front always felt a bit vague and lacked bite, the rear has become soft too. And it might need a change of drum shoes in the next service. Also, TVS has introduced CBS for the NTorq last month. And though we are yet to test it, it should make braking easier for novice riders.

While these were minor niggles which could be fixed at the workshop, what could be an actual deal-breaker for some is the fuel efficiency. It was only in Eco mode, which is a very sedate pace, not exceeding 55kmph, that my fuel efficiency figure was around the 40kmpl mark. Of late, ever since I’ve heard about its return, I have ridden it rather spiritedly and the fuel efficiency has dropped to 34.7kmpl. This could be down to its 116.1kg weight, which makes it the heaviest 125cc scooter. Though you don’t feel that weight while riding it, that, coupled with the aggressive state of tune of the engine could be the possible reasons for this.

There’s so much to talk about the SmartXonnect instrument cluster that you can read about it in detail here. To be honest, I’m not a fan of the navigation as my phone kept losing connection with the system. And as far as the caller ID goes, it works perfectly, but I haven’t really felt the need for it in my time with the NTorq. It feels premium and top-notch though. I have faced no electrical issues with it in more than 8000km. The big digital readouts though make fellow riders take a look at the instrument cluster, followed by a quick glance from the front to the back.

Overall, though persistent, the niggles aren’t really deal-breakers and like I said, can be fixed at the workshop. What it has in spades, unlike others in its segment, is sportiness, enough to put a smile on your face every time you whack the throttle open and zip through traffic. And since it’s a scooter, practicality is also offered in abundance. It might be targeted more towards the youth than the mature buyer, but boy does it live up to its positioning. In its time with us, the NTorq has thoroughly impressed everyone with its performance, practicality and convenience. If you can live with cold-starts and a not-so-frugal but performance-packed motor, there are not many better options available in this bracket right now.