Is it just about the looks? Or has the Deluxe really evolved into a modern day cruiser? 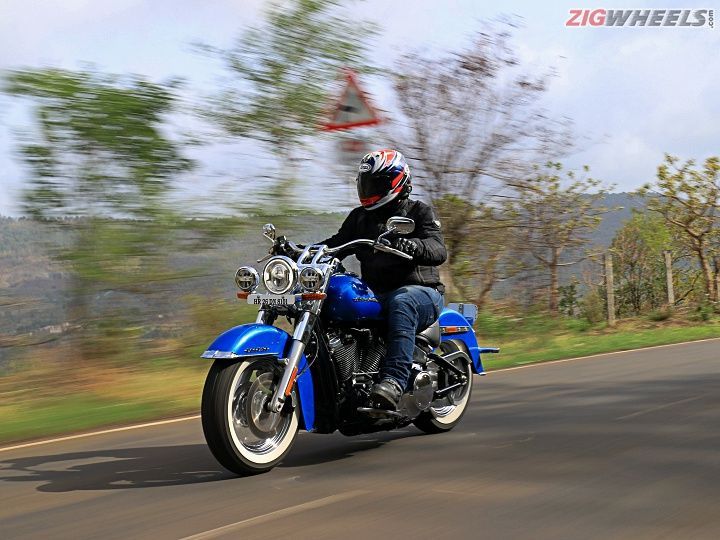 This year, the Harley-Davidson Softail family received one of the biggest overhauls in the industry. But during this platform shift, Harley also had to ensure that their original fan base, who are much in love with the American company’s traditional design lines, don’t wander away from the brand and its heritage. While the earlier models lacked the engineering finesse, the new range has the go to match the show and the agility to shame the mass it carries.

But in order to retain its original fan base, Harley had to ensure that most of its models remain true to their design heritage. One of them is the Harley-Davidson Deluxe. So while the Deluxe does maintain the retro charm, has Harley given it a big enough dose of engineering and modernity?

The Deluxe’s rich retro theme with its whitewall tyres, 16-inch spoked rims and the oh-so-gorgeous blue colour clearly stands out from the rest of the Harley-Davidson Softail range. Add to that the heap of chrome dripping off every inch of the cruiser.

At first glance, the chrome-wrapped large LED headlamp and the two smaller auxiliary LED lights are an immediate attention grabber. The low beam has a wide and bright light whereas the high beam has a similar effect but covers a longer stretch of the road. The auxiliary lights too are bright and enhance the visibility offered by the low beam, covering the area closer to the bike.

Come closer though, and there are some nifty details in there. For instance, the angular indicator setup at the front and rear remind you of Cadillacs from the 80’s, and then there is the chrome strip on the edge of both fenders. These bits might be a bit polarising in terms of their appeal but there’s no denying just how striking they are.

Get astride the bike and the first thing you notice is the shiny instrument panel. The semi-digital console displays an analogue speedo readout with the tachometer, fuel meter and a whole lot more on the digital display, which can be cycled through via the button on the left switchgear.

Speaking of the switchgear placed on the swept-back handlebar, the quality is top notch but the placement is a bit odd and will take time to get used to. Especially the horn switch, which is a bit of a stretch. The view from the short stalk mirrors, though, is clear.

The chrome-finished Harley-Davidson logo flanking the 19.1-litre fuel tank and the fuel filler caps on both sides add to the old school theme (the left one is just for show).

The Harley-Davidson Deluxe gets a low-slung seat that’s just 675mm off the ground. As is the case with most Harleys, a pillion seat is available but only as an accessory.

Build quality and fit-finish levels on the Deluxe are top notch as well. This includes the chrome treatment across the engine and its components, the properly concealed wiring and even the oil cooler that’s neatly tucked into the frame.

A highlight, but also an annoying feature for someone living in an apartment building, is the smart key with an aluminium handle lock key, which is common across the Softail range. Its benefit is keyless ignition. But if someone plans to sit on the bike for just a selfie, the alarm goes off. Heck, if someone even looks at the bike funny, the alarm goes off. And unless you physically carry the key into the bike’s vicinity, the alarm is going to keep ringing. That’s because there’s no button on the smart key to deactivate the alarm.

Another basic feature it lacks is a side stand warning or engine cut-off, which is an essential safety requirement for a cruiser of this size. Especially when the transmission box is so big that the side stand is barely visible.

While the Deluxe has retained the evergreen retro theme its Milwaukee-Eight 107 V-Twin motor is all new and is shared by the entire Softail lineup. There are no rubber mounts to cut down vibration levels off the 1745cc engine. Despite that, the motor feels almost vibe-free. Thanks to the twin counter-balancers, only the necessary vibes get transmitted to the rider, reminding him of riding a thunderous V-Twin. A mind-blowing experience then, for someone who has ridden an older generation Harley-Davidson!

The 144Nm of torque kicking in at just 3000rpm is enough to propel the 318kg bling factory off the line effortlessly. In fact the torque delivery is so abrupt that we ended up spinning the rear, with the bike fishtailing at times, every time we tried launching it. After some practice runs though, (with the rear refusing to stay calm) we managed a 0-100 kmph run in 5.25 seconds.

The new engine runs a higher compression ratio (10.0:1 vs the 9.6:1 ratios seen in the earlier 103 Twin). But the acceleration has improved, mainly due to the shorter initial gearing. So while the launches are quicker, with tons of torque available at a twist of the wrist, you do need to work the 6-speed gearbox quite a bit to keep the bike afloat in the city. This is also evident from the roll-on numbers. In 3rd gear, the Deluxe manages 30-70kmph in 3.21 seconds, which climbs up to 3.85 seconds for the 40-80kmph stint in 4th gear. Respectable, but hardly quick for an engine with so much torque.

We rode the Deluxe in a fairly cooler climate, with the rains just making their way to Pune. In these conditions, the Deluxe turned out to be a comfortable place for the rider in the city. In summers though, it can get piping hot.

On the highway, the Deluxe is meant to cruise in sixth gear, feeling extremely relaxed at 100kmph with the tacho indicating between 2300-2500rpm. Now don't get us wrong, the bike is capable of doing higher speeds (upwards the 160kmph mark), but with no windscreen to protect you from the wind blast, the arms-and-legs-in-the-wind riding position can get tiring really fast.

The rider needs to stretch out a bit to reach the handlebars but the ride stance is relaxed. Also, the rider footboards are generously sized and are big enough to accommodate Big Foot’s feet. That said, even with my 6 feet height, the reach to the footboards requires a mild stretch.

The ride would have been far more comfortable if the boards were placed just a bit closer to the rider seat. Also, the seat cushion could have been firmer to cover long distances in comfort. The stock seat, while feeling plush, is a tad too soft and long hours in the saddle can get a bit tiring as you sink into the seat without any chance of moving around to relieve pressure points.

Surprisingly, the 318kg kerb weight disappears once you start riding the Deluxe. As a result, the Deluxe offers a blissful experience in the city and on the highway. Manoeuvring the bike in city traffic also doesn’t require much effort. Although, taking U-turns and sharp turns on busy city streets is an exercise in itself. And that’s mainly due to the long wheelbase of 1635mm.

So is the lightness due to the 13kg weight loss over the previous Deluxe? Up to some extent, yes. But it’s also because the frame is a lot more rigid than before. And this is evident in the way the Deluxe corners. We spent quite a bit of time in the ghats of Lavasa during our photoshoot. And we realized that with every corner we tackled, the bike could be pushed lower and faster, with plenty of confidence mid-corner. So yeah, it is fun to lean in. And yes, we are talking about a cruiser here.

Also, being a cruiser, it’s got an extremely low ground clearance of just 115mm. As a result, the footboards scrape easily. They can take a beating though, so don’t worry about going all out. The only downer then is that it can’t handle a set of chicanes in the same manner, since the weight transfer from side to side does require some muscle.

Lack of ground clearance also means that speed breakers need to be tackled with caution. Not the wide ones, but the tall ones especially, which are a common sight for us.

The ride quality is blissful as it deals with smaller bumps and potholes without straining the rider. The bike also settles quickly after tackling any sort of rough patch, with no signs of wallowing.

The ABS-equipped brakes are potent and offer immense stopping power. On the downside, they lack feedback under hard braking. 100-0kmph is managed in 47.01m, which is at par with some of the best braking numbers we have managed in our tests.

Is it as Modern as it is Old-School?

The Harley-Davidson Deluxe with its scintillating old-school design is a sight to behold. Yes, it looks almost similar to the model it replaces but Harley has given it a sense of modernity that almost makes it feel like a brand new motorcycle. So here’s the thing, if you are looking for a motorcycle that’s come of age but still carries the classic American Cruiser image that appeals to all cruiser lovers, the Deluxe is worth a look.

We agree that at Rs 18.65 lakh (ex-showroom), it is a bit steep. But at this price point, you will not only get exclusivity but also a more agile and thoroughly modern cruiser. The retro design is true to Harley-Davidson’s design heritage, the ride quality is fantastic and the handling too is sharp but approachable. Add to that a more homely feeling motor in Indian traffic conditions, with oodles of torque for a relaxing highway cruise. All that makes it a pretty well-balanced cruiser. And not to forget, one of the most desirable as well.