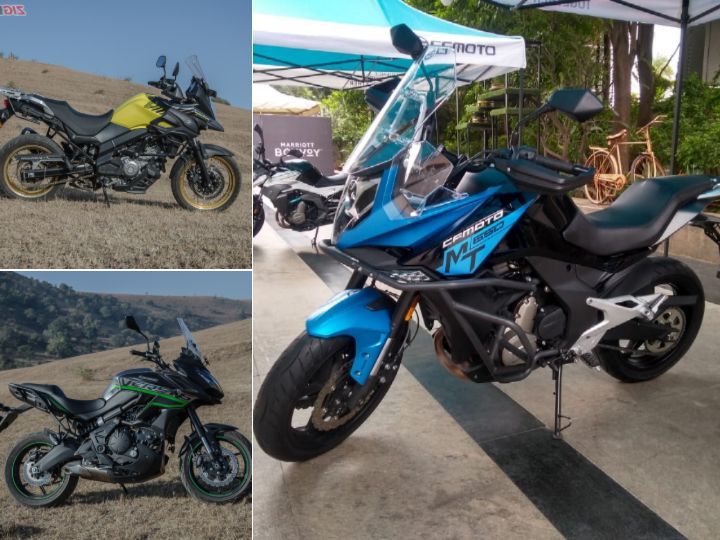 If you are looking for a 650cc adventure motorcycle, then you couldn’t have timed it better. Because until a few days back, there were just two motorcycles in this category, the Kawasaki Versys 650 and the Suzuki V-Strom 650XT, in the market. However, there’s a new player from China, the CFMoto 650MT, that looks pretty promising on paper. So can the Chinese finally put up a good fight and challenge the Japanese? Let’s find out.

At a glance, the two engines on the 650MT and the Versys 650 may look similar and as a matter of fact, they are! You see, the CFMoto 650MT's engine is heavily inspired by the Kawasaki’s 650cc unit, so much so that the bore and stroke figures are the same. However, the 650MT puts out a wee bit more power higher up the rev range compared to the Versys 650.

We are yet to test out how the motor on the 650MT behaves, but we do know a lot about the one on the Versys and the V-Strom 650XT.

In pictures, the 650MT looks visually bigger than both its rivals. However, on paper, it's a totally different story. It is, in fact, the most compact motorcycle of the three. While the trio shares the same ground clearance, the seat height on the V-Strom 650XT is 5mm shorter compared to the other two, which could prove to be quite helpful for riders with shorter frame. In terms of sheer size, the V-Strom 650 leads the charge and it has a fuel tank capacity of 20-litres, which is just a wee bit smaller compared to the Versys 650.

In terms of suspension setup, the 650MT and the Versys 650 are similarly kitted out. Both are equipped with an adjustable suspension setup at the front. Riders can tweak the bikes’ suspension according to the terrain or to suit their riding style. The V-Strom 650XT, on the other hand, gets a conventional telescopic fork unit. However, when it comes to braking hardware, it’s the Suzuki with its bigger discs that has something to boast about. Not just that, the V-Strom 650XT is the only motorcycle in this list to get spoke wheels, which are tubeless as well! Whereas, the Versys 650 and the 650MT are road-biased motorcycles with alloys wheels.

It’s no news that the Kawasaki Versys 650 is the benchmark in the mid-displacement adventure touring segment. And the V-Strom 650XT has proven to be quite good when it comes to off-roading.

However, CFMoto has just knocked it out of the park with its phenomenal pricing. So has the Chinese with its feature-loaded, affordable price tag finally cracked the code? Well, we will be riding the 650MT soon, so stay tuned for our review where we will try to bring you an answer to that question.