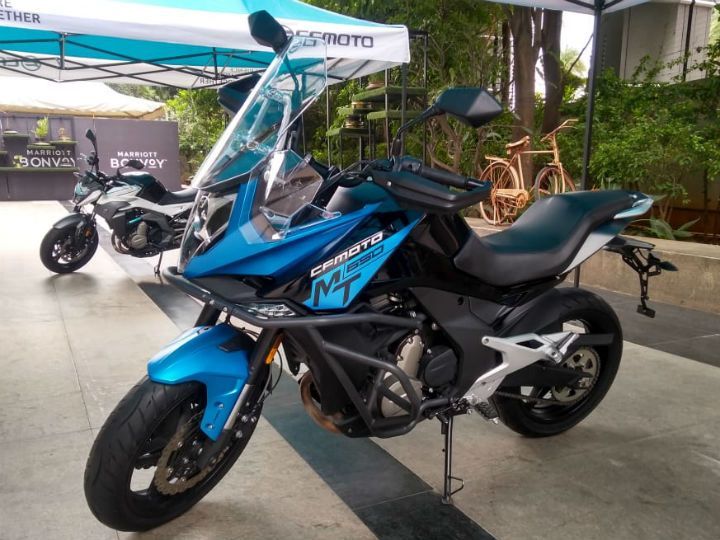 CFMoto has finally entered the Indian market with not one but four new products. Among the newly launched motorcycles, three of them are in the 650cc range, namely the 650NK, 650MT and 650GT. The 650NK is priced at Rs 3.99 lakh whereas the 650GT will set you back by Rs 5.49 lakh. On the other hand, the 650MT commands a price tag of Rs 4.99 lakh (all prices, ex-showroom India). The prices for the 650NK and 650MT are introductory, though. These three motorcycles cater to three different types of riders, and here’s what the bikes are all about:

The CFMoto 650NK is essentially a naked middleweight motorcycle. The sharp and sleek LED headlamp is complemented by large tank extensions. At the rear, the short tail section and the underbelly exhaust further accentuate the meaty 160-section rubber. The motorcycle (along with the rest of the range) has been designed by Kiska, which is the same firm that’s responsible for KTM’s radical motorcycles as well.

Apart the headlamp, even the indicators and tail lamp sport LED units. The wide handlebars and the rear set footpegs offer upright ergonomics with a slight leaned-forward stance for an added dose of sportiness. That said, the riding position should be comfortable for both city and highway rides. The motorcycle tips the scales at 206kg (kerb) and gets a massive 17-litre fuel tank.

Powering the 650NK is a 649.3cc parallel-twin liquid-cooled, fuel-injected engine. It produces 61.1PS of power at 9000rpm and 56Nm of torque which arrives at 7000rpm. The engine works in conjunction with a 6-speed transmission.

The motorcycle employs a high-strength alloy steel frame and it comes with a KYB telescopic fork up front and a KYB monoshock at the rear. Brakes include dual petal discs up front and a single disc at the rear with Continental dual-channel ABS as standard. Another worthy alternative to this motorcycle is the Kawasaki Z650 (Rs 5.69 lakh, ex-showroom India).

The CFMoto 650GT is basically a sports tourer complete with a full fairing and a large windshield. CFMoto says the windshield is wind tunnel-tested and is adjustable up to 60mm. This should keep windblast at bay while riding at high speeds. Unlike the all-LCD console in the naked and in the sports tourer, the instrument cluster is a 5-inch TFT unit in the 650GT. Interestingly, the contents in the display can be rearranged too. The bike comes with an easy-to-reach handlebar which should be perfect for touring. This coupled with the generously large 19-litre fuel tank should offer comfortable, long-distance mile-munching capabilities. At 795mm, the seat is 20mm lower than the 650NK, making it ideal for shorter riders. However, at 226kg (kerb), it is heavier than the naked by 20kg.

The 650GT is powered by the same engine as the 650NK. However, it has been tuned to produce slightly more power and torque, presumably to offset the added weight as well as to suit the character of the motorcycle. The powerplant produces 62.5PS at 9000rpm and 58.5Nm at 7000rpm, which is an increase of 1.4PS and 2.5Nm over the naked variant. The underpinnings remain the same as the 650NK. In terms of competition, the 650GT goes head-to-head against the Kawasaki Ninja 650, which costs Rs 5.89 lakh (ex-showroom, India).

The CFMoto 650MT is a road-biased adventure tourer with a sleeker design language compared to the 650GT. The front end is dominated by a vertically-stacked LED headlamp and a tall windshield, which is flanked by knuckle guards on both sides. Being an adventure motorcycle, the 650MT has the highest seat height at 840mm. It also sits a 20mm higher off the ground than the other two motorcycles (150mm). But on the flip side, the stubby underbelly exhaust could limit its water-wading capability.

Though the 650MT shares the parallel-twin engine with the other two models, it has been tweaked to produce a lot more power and torque. With a peak power of 70.7PS at 8750rpm and 62Nm of torque at 7000rpm, the motor is 8.2PS and 3.5Nm more powerful than the 650GT.

The ADV features a premium adjustable inverted fork up front which offers 140mm of travel while the rear monoshock gets a 45mm stroke. The 17-inch alloy wheels come shod with Metzeler Roadtec Z8 Interact radial tyres. On the other hand, the 650NK and 650GT ride on CST Adreno Sport rubber on both ends. The 650MT rivals the Kawasaki Versys 650 (Rs 6.69 lakh) and Suzuki V-Strom 650 (Rs 7.45 lakh) in the middleweight ADV space. Both prices are ex-showroom India.