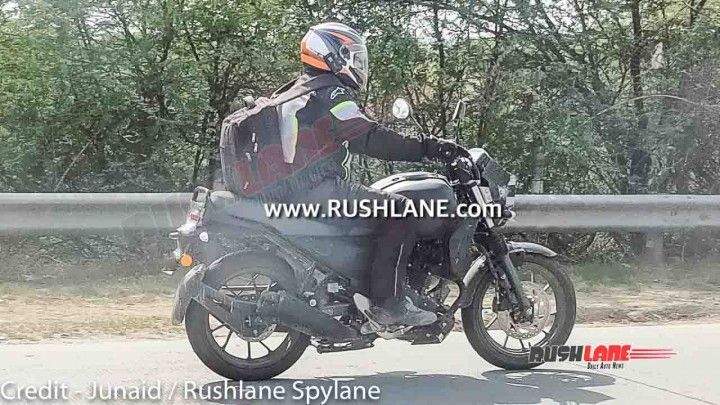 By now we already know Yamaha is working on a new bike that’s expected to be launched this year. The test mule has even been spotted testing in India and you can read about it here. Earlier, we were of the opinion that the bike may just be a downsized XSR250, but that’s far from the case. The upcoming bike actually seems to be based on the FZS-FI V3 and could hence be branded as the FZ-X. It’s now been spotted in what looks like a service centre, hinting at its imminent launch.

While the underlying hardware is basically the same, the overall design is what differentiates the two bikes. The FZ-X features a circular full-LED headlight, held together by aluminium brackets reminiscent of the XSR range, but the rest of the design language is a bit commuterish. The fuel tank, side panels, and abruptly ending tailpiece look modest compared to the muscular styling of the FZ range. The turn indicators are standard bulb units. The bike even gets redesigned radiator shrouds even though it clearly runs on an air-cooled engine.

Other noticeable differences include fork gaiters, a set of dual-purpose tyres, and a simple upswept exhaust design. The design does have an impact on the bike's overall dimensions as well. The FZ-X is 35mm taller, 5mm narrower (width-wise), and 30mm longer than the FZ. The wheelbase remains unchanged, at 1,330mm. While the exact kerb weight hasn’t been revealed, the gross vehicle weight is 289kg. Keeping this in mind, we expect the bike to weigh around 139kg, 4kg heavier than the standard FZ.

Leaked documents suggest the FZ-X will be powered by a 149cc single-cylinder air-cooled engine producing around 12.37PS at 7500rpm -- about 1PS less than the FZSV3. There’s no word on the bike’s torque figures but it’s likely to be around 13.6Nm. Expect the FZ-X to come with a full-digital console and single-channel ABS as standard.

Considering the changes, the FZ-X could command a premium of around Rs 5,000-Rs 6,000 over the standard FZ, pushing its asking price close to Rs 1.10 lakh (ex-showroom). Expect Yamaha to launch the bike by September this year.