Yamaha YZF-R7 vs YZF-R6: How Different Are The Two Yamaha Sport Bikes?

Aside from pure numbers, how different can two mid-displacement motorcycles from the same manufacturer be? 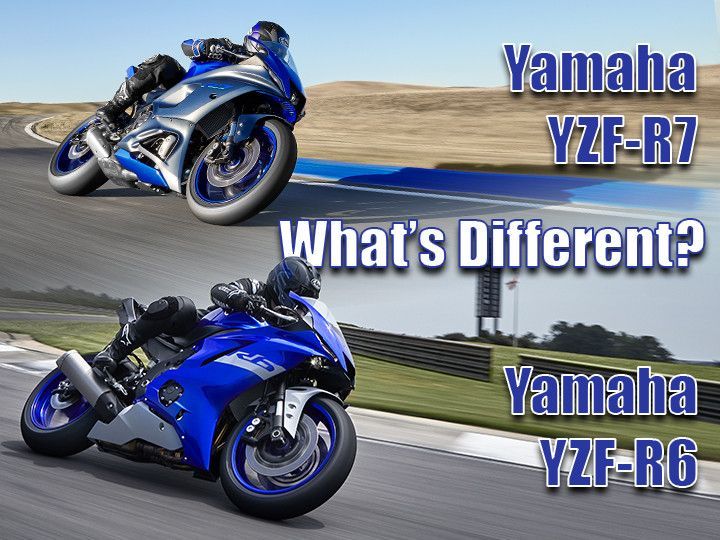 It was no big secret that Yamaha was cooking up something to fill the void that the YZF-R6 left in its sport bike lineup. The bike that replaces it, the new YZF-R7, has got us pretty excited. It is a sport bike meant to do its bidding on a daily basis as well as keep you thrilled on your weekend canyon runs. Here’s how the new member of Yamaha’s R-series of bikes is different from the now track-only YZF-R6.

Toned Warrior
The new Yamaha sport bike definitely adheres to the current R-family design language that originated with the R1 in 2015 and then filtered down to the R6, R15 v3 and R3. The sharp fairing, those twin LED DRLs and twin rear air-scoops are fairly similar.

What makes the R7 unique is just how slim it is. Firstly, by opting for the CP2 motor, which is one of the narrowest multi-cylinder powerplants in the world, Yamaha engineers have managed to make the R7 as slender as possible. It isn’t that the R6 is not slim enough but given that it has two more cylinders, the larger engine dimensions makes it quite a wide motorcycle.

Friendlier Ergonomics
The 600s had too committed riding postures for daily riding. The R6 is one of the original breed of 600cc supersports and it is great that it is a track-only motorcycle now as you can truly enjoy where it is meant to be ridden. The R7 takes a middle ground approach between a conventional supersport and a comfy sports tourer. Compared to the R6, you do not have to put your body through extremes, your back muscles not crying for help as much. Still, it is a pretty aggressive stance, especially when you pit it against its peers. Why not check out our spec comparison between the R7 and the other mid-displacement sport bikes to get a better understanding.

Punchy Twin
The R6 is a fire breather around a race track. The 599cc inline four potter belts out 118PS and 61.7Nm. Sadly, the engine just couldn’t make this much power and still meet EU5 norms. Also, it makes the majority of the power higher up in the rev band. With the 689cc CP2 motor from the MT-07, the R7 intends to be a better all rounder. Its peak power output of 73.4PS isn’t as impressive as the R6’s but it excels where it matters, delivering more torque (64Nm), especially in the mid-range.

Relatively Simpler Foundations
Yamaha has upped the ante from the MT-07, which uses conventional non-adjustable suspension, to the R7 as the new sport bike gets a 41mm KYB USD fork (compression and rebound adjustable) and a linked monoshock (preload and rebound adjustable). Plus, it has four-piston radial calipers at the front and grippy Bridgestone Battlax Hypersport S22 tyres. While these were necessary to provide the R7 enough flexibility for road and track usage, the hardware isn’t as sophisticated as the R6. The suspension is fully-adjustable and the brakes are larger. It is surprising that the R6 comes with Dunlop tyres and not Pirellis. Perhaps that’s Yamaha’s way of cost cutting on such a motorcycle, right?