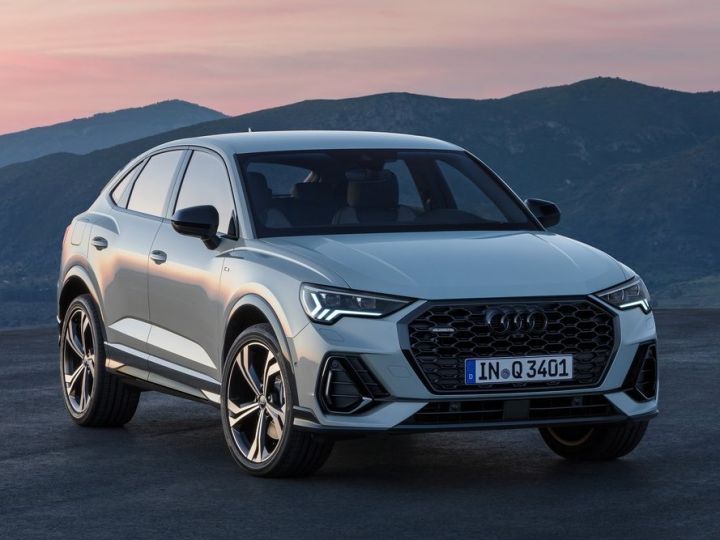 Soon after unveiling the silly fast SQ7 SUV, Audi has taken the wraps off the Q3 Sportback. Wait. What is the Sportback tag doing here? The standard 2019 Q3 has gone under the knife and the carmaker has now introduced a swooping coupe-SUV body style out of it.

The Sportback gets key differentiating elements to keep up the sporty quotient. For starters, it comes with a black honeycomb grille, ORVMs and window sills. In profile, the sloping roofline catches your eye immediately and boy, does it look slick. Then there’s the tasteful application of body cladding to give it a more tough look. At the rear, the Q3 Sportback gets a redesigned boot lid to keep it in sync with the sloping roofline. The bumpers have also been restyled and look a lot sportier now.

While the Q3 Sportback is longer than the standard Q3 SUV, the sloping roofline has made it 29mm lower. Also, have a look at the table to see how they fare against each other in terms of dimensions:

Inside, both the models share an almost identical cabin design and gets all the elements seen on latest Audis. So you get a 10.25-inch digital drivers display that can be upgraded to a 12.3-inch Audi virtual cockpit if you desire. On the central console, the Q3 Sportback comes with a touchscreen unit for the infotainment system that removes the cluster of buttons. Below them are knobs for climate control duties.

The infotainment system also comes with Audi’s MMi Navigation Plus system as well as various connected car technologies. Some of the connected car tech features include online navigation, Alexa voice service as well as speed limits info. Apart from that, it also comes with Android Auto, wireless Apple CarPlay, Bang and Olufsen sound system, dual-zone climate control as well as cruise control. An adaptive cruise control system is also offered as an option.

The Q3 Sportback also comes with some well noted safety features. Apart from multiple airbags (six to be precise), ABS with EBD and ESP, it comes with lane departure warning, lane change warning, 360-degree camera and Audi’s pre-sense front. This system monitors the traffic in front of the vehicle for potential hazards.

If Audi’s pre-sense front detects a hazard, it warns the driver through a visual, acoustic, and haptic warning. If the driver still doesn’t respond, the vehicle comes to a halt and initiates the Audi pre sense basic safety measures by calling emergency services.

At launch, the Q3 Sportback can be had with two engines: 2.0-litre TFSI petrol and 2.0-litre TDI diesel. The petrol unit churns out 230PS while the diesel produces 150PS. Both the engines come with Audi’s trademark quattro all-wheel drive system and an 8-speed automatic transmission. The  Q3 Sportback will also be offered with a manual gearbox, an entry-level petrol option and a more powerful diesel unit after launch. The entry-level petrol unit will also come with a 48V mild-hybrid system.

The Audi Q3 Sportback is set to go on sale in Europe starting September. When launched, it will be priced at €40,200 (approx. Rs 35.20 lakh) for the 35 TDI S tronic and €46,200 ( around Rs 39.73 lakh) for the 45 TFSI quattro S tronic (both prices Introductory). While Audi India could launch the second-gen Q3 next year, we also hope it offers here as a sportier option.