The Audi Q7 gets major tech updates to keep up with the brand’s tag ‘Vorsprung Durch Technik,’ a.k.a. Progression Through Technology 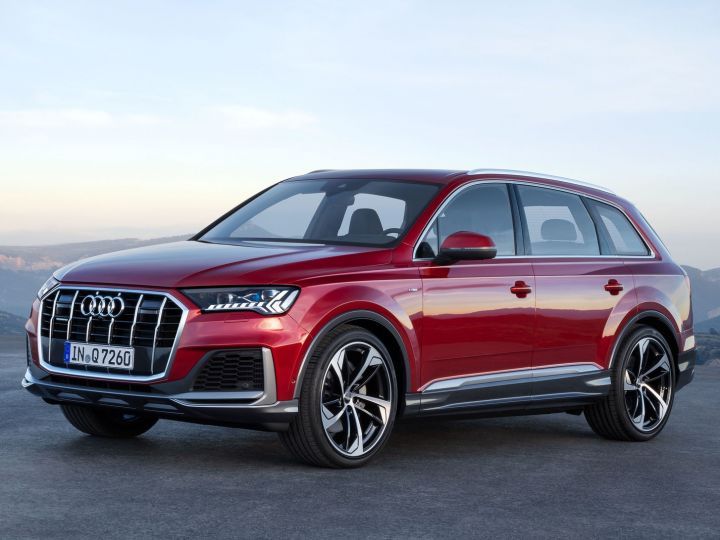 After the introduction of the second-generation Audi Q7 in 2014, Audi has now taken the wraps off the Q7 facelift, giving it a lot more than your conventional nip and tuck. This includes revised exteriors, all-new interiors in line with Audi’s latest design language, more tech and mild-hybrid powertrains. Read on to know more.

The previous-gen Q7 was criticized for its estate-esque looks. Audi has now addressed it with the Q7 facelift. The front of the refreshed SUV is dominated by the huge octagon grille that now features vertical chrome slats. Flanking the grille are sleek LED headlamps with stylish DRLs. These can be opted for with the HD Matrix LED technology with Audi’s laser lights. Aggressive air dams top the look at the front.

While the side profile remains mostly unchanged, the SUV now gets black cladding all around to give it the tough look that was missing in the pre-facelift Q7. Audi has also thrown in stylish 5-spoke alloys to jazz things up. At the rear, the Q7 now gets sleek LED tail lamps that are connected by a thin chrome strip. These tail lamps are also likely to do the typical Audi dance while locking and unlocking the car. An aggressive bumper tops up the look at the rear. The new design of the behemoth has made it grow 11mm longer and the overall length stands at 5,063 millimetres.

The interiors of the Q7 facelift are brand new. Following the latest design language from Audi, the cluster of buttons and the floating display in the centre console has been replaced by two huge touchscreens. These take care of all cabin functions including the MMi infotainment system, climate control, navigation and more.

The Q7 facelift will be available with the 3.0-litre TDi engine in tunes -- 231PS and 286PS -- at launch. A 3.0-litre turbocharged petrol unit that produces 340PS will join later. All engines will come fitted with a 48V mild-hybrid system as standard. The Q7 also gets brake regeneration function where energy from the brakes and deceleration are used to charge up the batteries. Audi also claims that if the driver removes his foot from the accelerator between 55-160kmph, the Q7 recuperates energy and rolls and coasts up to 40 seconds with the engine switched off, thus improving fuel efficiency.

Any changes to its underpinning?

While the platform of the Audi Q7 facelift remains the same as the current car, it gets plenty of optional gizmos for a better driving experience. This includes optional all-wheel drive steering, electromechanical active roll bar stabilization and adjustable stabilizers that reduce body movement and reduce body roll.

The seven-seater variant of the Q7 also comes with adaptive air suspension as standard, which can be raised if you intend to take it off road.

Considering the amount of tech updates the 2020 Q7 has received, it is expected to cost more than the current-gen Q7 which costs from Rs 73.82 lakh to Rs 85.28 lakh (ex-showroom, Delhi). While it is expected to launch in Europe in mid September, the refreshed Q7 is expected to hit our shores in mid 2020.

The Audi Q7 will take on the likes of the BMW X5, Mercedes Benz GLE and the Volvo XC90.

What do you like the most of the refreshed Q7? Let us know in the comments section below.