The newly spotted faired Yamaha motorcycle features a different headlamp setup. Here’s our analysis of what it could be 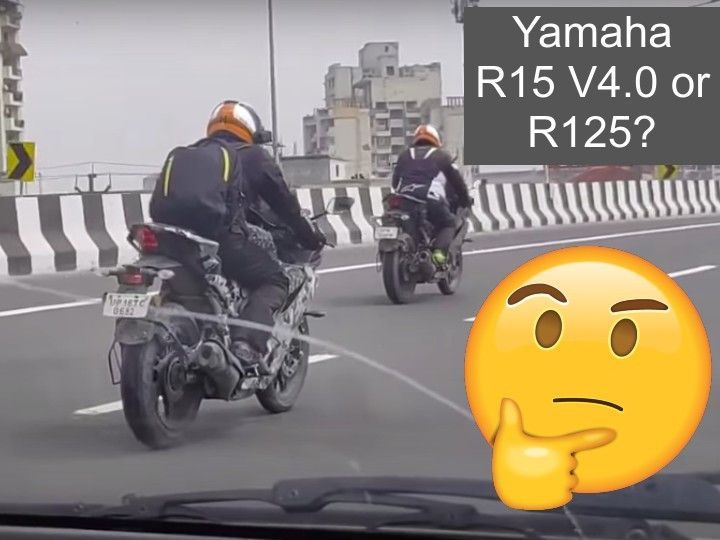 Yamaha seems to have something really interesting brewing in its backyard as two faired motorcycles were spotted testing for the first time reportedly in Ghaziabad, Uttar Pradesh. One of the Japanese brand’s manufacturing plants is situated in Surajpur, just 25km from where the bike was spotted. The test mule appears to have quite a few interesting design changes, leading us to wonder whether it could be the 2022 Yamaha R15 V4.0 or a new Yamaha R125. We analyse:

The most interesting aspect of the test mule is that it appears to have a single-pod projector LED headlamp, which is in stark contrast to the traditional twin LED headlamp setup in the current-generation model. Enthusiasts would recall the single-pod headlamp design debuted in the Yamaha YZF-R7, unveiled in May 2021. Considering this, it is safe to speculate that the Japanese brand is trying to apply the same design formula to its smaller bike, the R15, possibly as a part of its updates for the R15 V4.0.

This is similar to how Kawasaki carried over its new design language from the Ninja 400 to other motorcycles like the 2020 Ninja 650 and 2021 Ninja ZX-10R. Even the all-new Aprilia RS 660’s styling has been borrowed by the 2021 Aprilia RSV4.

Along with the new fascia, Yamaha could also offer a new TFT instrument cluster, hopefully with smartphone connectivity and turn-by-turn navigation. The clip-on handlebars also appear to be slightly wider, suggesting tweaked ergonomics. Additionally, Yamaha could offer an adjustable front fork like what TVS did with the Apache RTR 200 4V.

This, coupled with the likelihood of a tweaked rear monoshock, should help the bike be a lot more versatile, both on the race track and on the twisties. Rounding off the updates, we could also expect grippier tyres for better handling. On the other hand, Yamaha could retain the same engine as it is already feature-packed and powerful enough anyway.

There have been several price hikes across segments in the recent past. One of the ramifications of this changing price trend is that they have made 150+cc motorcycles prohibitively expensive. Consequently, this has caused a massive growth spurt in the 125cc segment. KTM has been successful in this space with the KTM 125 Duke and the RC 125, even though they are expensive for what they offer. Yamaha could try to exploit this untapped segment with the Yamaha R125. To this end, it could borrow the Euro 5-compliant R125 from Europe and redesign it for our market.

And the recently spotted test mules could be exactly that. The mechanicals could have been borrowed straight away from the Euro-spec R125, whereas to keep the costs in check for the Indian market, the bike gets a telescopic fork as well. The new single-pod headlamp design could be to differentiate this motorcycle from the Yamaha R15 V3.0. Even the stubby exhaust is reminiscent of the European 125cc faired bike.

If Yamaha indeed launches the R125, it is likely to easily undercut its arch-nemesis, the KTM RC 125, which is currently priced at an obscene Rs 1,80,538. This will also give Yamaha a reason to hike the prices of the R15 V3.0, which is currently an affordable Rs 1,54,600 (both ex-showroom Delhi). Either way, the future does look exciting for performance enthusiasts. Let us know what you think in the comments below.