The second generation Maruti Suzuki Ertiga is here. So we compare it to a wide range of MPVs in the market to see what’s what 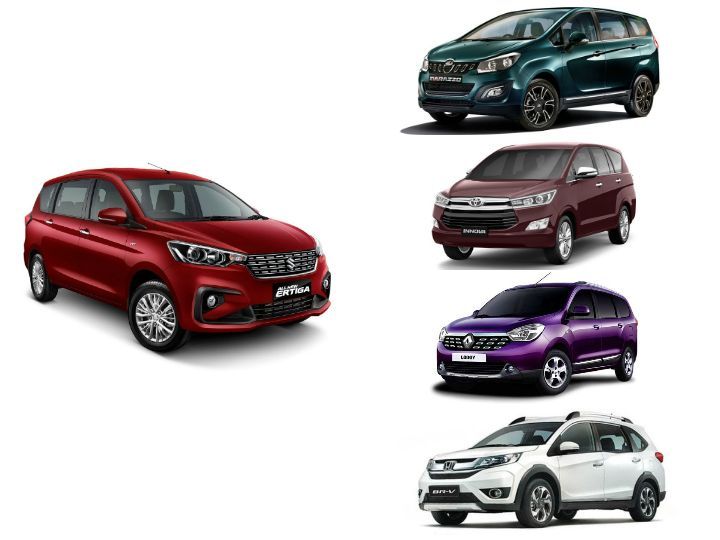 The all-new, second-generation Maruti Suzuki Ertiga is here. It's sharper looking on the outside, shedding the please-all design of its predecessor. Its interior is bigger, gets new-age features and most importantly can seat seven adults more comfortably than before. But how does it compare to its competition on paper? We pit it against the Renault Lodgy, Honda BR-V, Mahindra Marazzo, Toyota Innova Crysta and its own old self to see if it is really worth the competitive asking price.

The Maruti Suzuki Ertiga is the most affordable MPV in this comparison. The interesting bit is that the top-end diesel variant of the Ertiga is only Rs 21,000 more than before, even though it has received a significant upgrade in terms of features.

Only the Renault Lodgy comes close in terms of price, but it is only available with diesel powertrains. The Lodgy, apart from getting a cruise control/speed limiter system, has less equipment than the Ertiga - making it feel less value for money. The Honda BR-V feels overpriced in comparison. However, it gets LED DRLs, cruise control and a CVT gearbox as extra features.

Mahindra has priced the Marazzo to stay clear of the Ertiga altogether, creating a niche for itself. Meanwhile, the Innova Crysta is in a segment of its own and will not be affected by the new Ertiga.

While the new Ertiga is bigger than before in every measurable way apart from the wheelbase, it is still one of the smallest MPVs in the country. Only the Honda BR-V is smaller, in terms of overall height and wheelbase. Among the monocoque MPVs, the Lodgy stands out - it is the longest, widest and tallest among the three. It has a longer wheelbase than all the competitors - so it should theoretically be the most spacious inside, though it is not the case in real life. The ladder-frame based Marazzo and Innova take key points in terms of overall dimensions.

The diesel engine of the Ertiga has been carried over from the first-gen model, but it is more efficient and feels peppier than before. How? It is lighter than before thanks to the lighter ‘Heartect’ platform.

Do not expect it to set fire to the performance charts though, it gets the least powerful engine here and has the lowest power to weight ratio in the comparison even though it is as light as it is. The Innova Crysta’s larger displacement engines give it a distinct advantage in terms of performance. Of the smaller MPVs, however, the Lodgy has the most grunt.

Look at the claimed mileage figures and you realise where Maruti’s priorities lie. With a 4.43kmpl advantage over its nearest rival, the Lodgy, the new Maruti Suzuki Ertiga has been designed to be as pocket-friendly as possible. Maruti’s proprietary SHVS mild-hybrid system helps extract as much energy out of each drop of fuel as possible.

Those looking for a convenient automatic diesel MPV will have to shell out a minimum of Rs 17.18 lakh (ex-showroom Delhi) and get the Innova Crysta.

The Maruti Suzuki Ertiga is now powered by a new, larger petrol engine than before. The 1.4-litre motor has been replaced with a 1.5-litre unit. This develops more power and torque and is also paired to a twin-battery SHVS mild-hybrid system for maximum efficiency.

The Renault Lodgy and the Mahindra Marazzo are not offered with petrol powertrains at all.

The Toyota Innova Crysta’s larger engine develops the most power/torque here. But if you look at the important power-to-weight ratio, it is the Honda BR-V which should accelerate off the line faster.

The Maruti Suzuki Ertiga is certainly an improvement in terms of on-paper performance. Just like the diesel-powered variants, the Ertiga petrol is also mostly about efficiency. The Ertiga’s petrol engine can also be paired with an automatic transmission for greater driving convenience in the city.

The Maruti Suzuki Ertiga is now offered with a standard safety kit of dual front airbags, ABS with EBD, ISOFIX child seat anchor points, front seatbelt pretensioners and rear parking sensors to adhere to upcoming crash test norms. The automatic variants get ESP and hill-hold as additional safety equipment, but that’s about it. There are no side airbags for the rear seat occupants, no ESP on non-AT variants, no lane-change assist, no front parking sensors or other advanced safety systems. The Renault Lodgy, Mahindra Marazzo and the Honda BR-V are no better, offering nothing more in terms of safety either.

The Toyota Innova Crysta does offer a few more safety features like seven airbags and stability control, but costs the most at Rs 20.7 lakh (ex-showroom Delhi).