The two three-row offerings already share a platform. We find whether they’re also similar in equipment

Kia India recently took the wraps off its fourth offering for India, the Carens. While this three-row MPV and the Hyundai Alcazar have different identities, there are common bits such as offering 6- and 7-seater layouts, as well as sharing the same platform. But do the similarities extend up to the features list? Let's find out:

Looking at the features list, the Carens and Alcazar share a lot in common which includes the touchscreen infotainment system, sound system, ambient lighting, as well as ventilated seats. But the Carens differs with Kia Connect connected car tech compared to BlueLink for the Alcazar. The latter has a slight edge in featuring a fully digital drivers display, a panoramic sunroof, and wireless charging for the second row passengers. That said, the Carens gets air purifier controls, and electric tumble tumble captain seats.

While a detailed set of safety features are yet to surface for the Carens it shares common bits with the Alcazar such as six airbags, ABS, ESC, hill assist, all-wheel disc brakes and a tyre pressure monitoring system. A notable bit in the Carens is its six airbags are standard for all variants, unlike the Alcazar which is only available from the mid-spec Platinum trim onwards. The Carens sticks with front and rear parking sensors while the Alcazar additionally gets a 360-degree camera.

The other differences in the two three-row offerings could come down to the powertrains. For reference, the Alcazar comes with two engines: a 115PS 1.5-litre diesel and a 159PS 2-litre naturally aspirated petrol unit, paired with both a 6-speed manual and a 6-speed torque converter automatic transmission. The Carens, on the other hand, will likely get the Seltos’ 1.4-litre petrol and 1.5-litre diesel engines. While a 6-speed manual gearbox should be standard on both engines, the petrol will get a 7-speed DCT, with the diesel likely getting a 6-speed torque converter automatic option.

The Kia Carens is expected to go on sale by early 2022 at prices starting from Rs 15 lakh (ex-showroom India). Along with the Alcazar, the Carens is set to take on the Mahindra XUV700, Tata Safari, and MG Hector Plus. 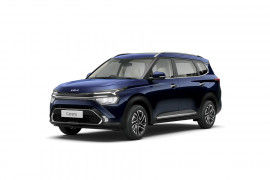