Can the Triber disrupt the sub-4 metre segment with its unique modular platform? 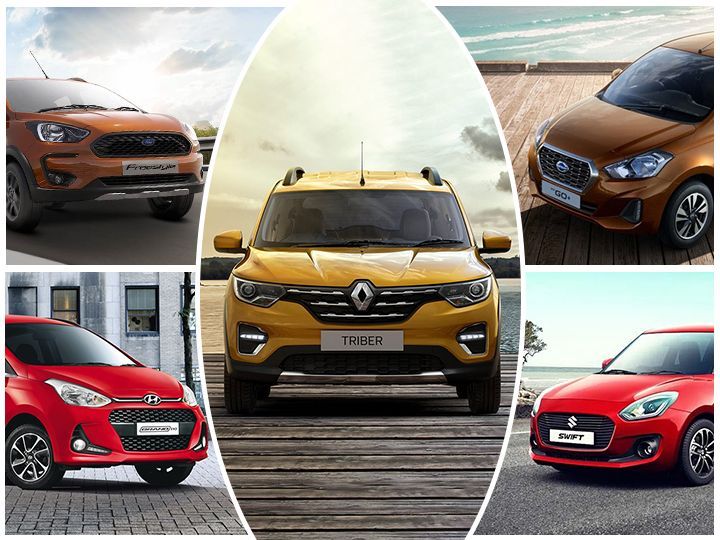 The Renault Triber, which aims to disrupt the sub-4m segment with its compact size and seven-seat practicality, has been unveiled. While Renault’s other mass market car, the Kwid, has performed quite well in its segment, the Triber has to deal with some well-established players like Maruti Suzuki Swift, Hyundai Grand i10, Ford Freestyle and the Datsun Go +. Can the Triber repeat the same success formula that the smaller Kwid managed to? Let’s find that out in this spec comparo.

The Ultra Modular Tag Of The Triber:

While even the Datsun Go+ offers seven-seats, the Triber takes it a step forward by offering a modular setup which can be customised for various requirements. While the second row offers a 60:40 split setup, the last row offers 50:50 split and is also removable. This should allow you to customise the layout based on your needs. Apart from that, the second row can be reclined and slid back and forth for utmost comfort if you use it as five seater.

The Renault Triber not only towers over the rest but also boasts of the longest wheelbase here, which is even more than all the sub-four metre SUVs available in India. The Datsun Go+ narrowly beats the Triber in terms of length, while the Triber is slightly wider than the Freestyle and the Swift. On all other parameters, Triber pips all the competition, and that too by a decent margin.

If you intend to use the Triber as a five seater, it gets the largest boot space as well.

All five of them come with a decent amount of kit to keep you occupied during long road trips. Common features on all of them include a touchscreen infotainment system with Android Auto and Apple CarPlay as well as electrically-adjustable ORVMs. While the Triber might not boast an impressive feature list here, it gets keyless entry with push button start, manual AC, tilt adjustable steering wheel and rear AC vents for the last two rows. But it must be mentioned that the Grand i10, Freestyle and the Swift are better kitted cars while the Datsun Go+ is the most sparsely equipped one here.

Safety:
Considering the upcoming AIS 145 safety norms, which all cars should meet by October 1, the models featured here come equipped with dual airbags, ABS with EBD, driver and co-driver seatbelt warning and a high speed alert system. The Triber and Freestyle edge past their rivals by offering four and six airbags respectively in their top-spec variant.

The Renault Triber is powered by a 1.0-litre 3-cylinder petrol engine that produces 72PS of power and 96Nm of torque which aren’t the class leading figures by any means. In comparison, the Go+’s 1.0-litre engine churns lesser power but makes more torque than Renault’s engine. The most amount of power and torque is made by the Freestyle’s 1.2-litre 3-cylinder Dragon petrol engine while the Swift and the Grand i10 trail behind the Ford.

Talking about fuel economy, the Triber’s 1.0-litre motor will return 20kmpl, but the best claimed fuel efficiency here is of the Swift’s which returns 21.21km-per-litre.

The Renault Triber aims to disrupt the sub-4 metre space with its modular platform and seating options. While it is classified as an MPV, Renault is expected to price the Triber at par with B segment hatchbacks. The pricing will play a key role in the Triber’s success, but as a package it does look quite appealing. Expected to be launched by mid July, the Triber has a lot riding on it shoulders. So stay tuned to ZigWheels for the first drive review and a thorough real world comparison.