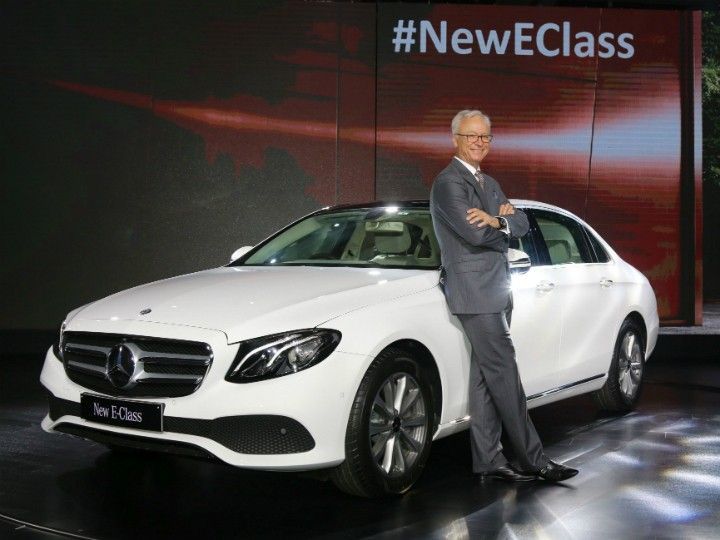 Mercedes-Benz India today announced the launch of the new E-Class sedan with the prices starting from Rs 56.15 lakh ex-showroom Mumbai. The new E-Class will be available in two variants, the E200 petrol and the E350d which is the diesel and the two variants are priced at Rs 56.15 lakh and Rs 69.47 lakh ex-shwroom Mumbai respectively. The new E-Class will be available in the long wheelbase version only and this is the first right hand drive long wheelbase E-Class sedan on the world. In addition, India is only the second country in the world to get the LWB version of the E, the other country being our neighbour, China.

The car measures 5065mm in length which is 186mm longer than the current car, and has a wheelbase of 3079mm which is a colossal 205mm more than the outgoing model. Needless to say it is built for the chauffeur driven India and has unmatched rear space in the cabin. The cabin itself is now more akin to its elder sibling the S-Class and that is a great thing. You get a COMAND system with a 12.3inch screen which now also supports Apple CarPlay and Android Auto. There is however no digital display for the instrument cluster like the one on the Chinese version, instead you get analogue dials with a high-res TFT screen for vehicle information. A Burmester sound system is also offered as standard. The rear seats are reclinable and feature Merc’s signature comfort headrests there aren’t however any cup holders, controls for the infotainment system or massage function even in the top of the line E350d variant. The window blinds, rear windshield blind and the panoramic sunroof can all be operated from the rear seats.

The new E-Class is powered by two engines. The E200 is powered by a 2.0-litre inline 4-cylinder petrol engine making 184PS of max power at 5500rpm and 300Nm of peak torque which is available from 1200rpm. The E350d (read review here) on the other hand is the more exclusive of the two and is powered by a 3.0-litre V6 which dishes out 258PS of max power at 3400rpm and 620Nm of peak torque is available from 1600rpm. Both engines are paired to Mercedes-Benz’s 9-speed GTronic transmission which sends power to the rear wheels. The E350d is the top of the line variant in the lineup whereas the petrol slots below the diesel and does come with its share of compromises. The 350 comes with the AIRMATIC suspension package as standard whereas the petrol has to make do with the traditional suspension. Though both variants get equal amount of safety features, ABS, ESP, airbags, traction control, rear reversing camera and paring sensors, the 350 comes with a 360 degree camera which is paired to the Parking Pilot system, a feature the 200 misses out on.

The launch of the E-Class has ushered in a new chapter for Mercedes’ best selling sedan. Yes, it is considerably more expensive than its rivals like the BMW 5-series and the Audi A6 but the level of luxury, space and standard equipment on offer makes it a proposition hard to bypass.