Mercedes-Benz E 350d First Drive: On A Cushion Of Air

India is the only country on the planet to get a long wheel base version of Mercedes' bestselling sedan in right hand drive. So a tailor-made super luxurious sedan which could turn the segment on its head. What's not to like 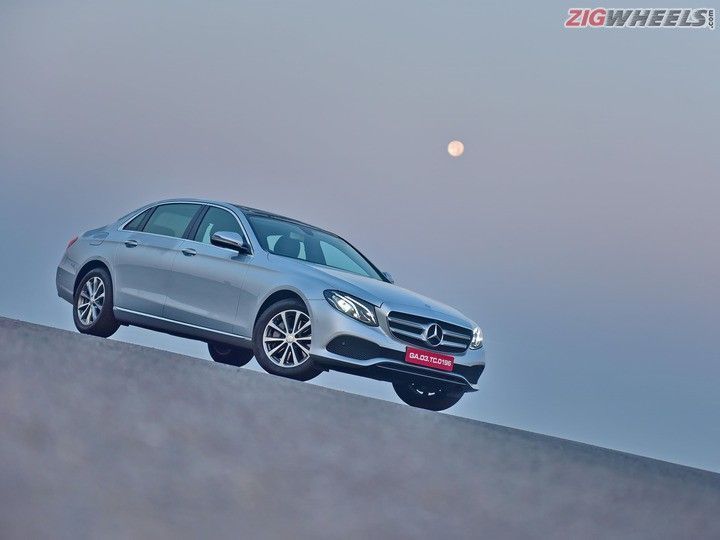 “So what do you do for a living?” I am often asked. “I am an automotive journalist” is the usual answer. “That is so cool, I wish I had a job like yours.” is the usual confession, combined with an envious look. It is at this moment that our chest inflates with pride at what we do. And to be honest we do enjoy our jobs, thoroughly. But every now and then a car comes along that tends to make us question our choice of profession, like the new Mercedes-Benz E-Class. Why? Simply put, it’s a geek-fest. Almost everything is electronically operated and everything works flawlessly, which in turn kind of makes us feel irrelevant. How have Mercedes-Benz managed to pack all that tech and then some more is a question that took us an entire day to figure out. Envy our jobs, you say? Yeah, right.

So what’s so special about it?

In a nutshell, everything, but let’s start with the dimensions. For starters, the new E-Class is actually the long wheelbase version of the 10th generation E-Class available the world over. But India is only the second country to get the long wheelbase version (LWB) after China. We are also the only country to get the LWB in right-hand drive format so in essence, the new E-Class is tailor-made for chauffeur-driven India. It measures over five metres in length, 5065mm to be precise, and has a 3079mm wheelbase, which is 205mm longer than before. It is also marginally wider and slightly shorter compared to the outgoing model. The extension of length and wheelbase not only frees up more space inside the cabin but makes the car appear more stately as well.

Aesthetically, it now looks much closer to the S-Class than it ever did, with a prominent grille wraparound head and tail lamps and a sloping roofline reminiscent of the S and the C. The lighting is an all LED affair and the headlamps especially come with a lifetime guarantee.

Okay, what about the interiors?

The cabin doesn’t feel like it belongs to the segment. It feels as if it comes from a segment beyond. Mercedes-Benz with the new E will not only raise the bar for the competition but the customer’s expectation from the segment as well and here’s why; The cabin of the E-Class feels special and exquisite. The dash is overlaid with leather along with liberal usage of wood and chrome in just the right quantities and just the right places. Then there are the buttons and control surfaces which are at par with the S-Class and the panoramic sunroof further adds to the roominess of the car. The front seats are comfortable, 12-way adjustable, and come with memory function. But like most luxury car owners would prefer, the new E-Class is all about the rear passengers.

In the rear you now get 50 per cent more legroom than before and though the seats might not be on par with the Mercedes’ flagship sedan, they are pretty close. The rear seats are recline-able and feature electrically adjustable comfort headrests, both of which are first in class features. Rear occupants can even push the passenger seat forward via a button on the door panel to further increase the legroom. The rear occupants also get electrically operated sunblinds both on windows and the rear windshield. The rear seat simply envelopes you in comfort and the comfort headrest feels nothing short of a goose feather pillow. If you know an insomniac, the rear seat of this car might be the cure.

Then there is the sheer amount of tech in the car. Though, unlike the S-Class which gets an LED screen across the entire dash, the instrument cluster on the E-Class is an evolution of the semi-digital cluster of the outgoing model. The 12.3-inch infotainment screen is a separate unit paired to Mercedes’ very own COMAND system, which now boasts of an even more extensive feature list including in-car WiFi. And I have to say, it isn’t the most comfortable system to use and neither the most intuitive. You do need to fiddle around with the controls for a fair amount of time before you can use it intuitively. Though you get-for the first time ever- touch controls on the steering wheel. The left pad controls the COMAND system while the one on the right controls the information display. In addition, the car also comes with Apple CarPlay and Android Auto, but since there is no touchscreen interface they have to be used via the COMAND system only, which limits the functionality of Android Auto, especially, to a certain extent.

But once you do get used to the infotainment system and switch on your music, you can enjoy the glorious sound quality of the Burmester 13-speaker sound system. And the best part is, all of the aforementioned features are part of the standard package on the E 350d. What you see is what you get.

And how does it ride?

Like it’s gliding on air, which is sort of true because of the fact that the E 350d comes with AIRMATIC suspension as standard. This combined with ADS or Adaptive Damping System ensures that the ride is sublime. The system replaces traditional steel springs with air springs and the ADS constantly adapts to the road surface to provide the best ride comfort possible. And the result is a ride that is simply sublime. It does feel like it rides on a cushion of air. Every bump and undulation on the road is tackled without it ever being felt or heard inside the cabin. It’s only when you pass over a particularly nasty pothole that you hear the tyres slam into the tarmac, and yet the impact will not be transferred to the cabin. In addition, the 17-inch 55mm sidewall tyres also ensure that comfort is optimised.

So only for backseat driving then eh?

Nope not at all. Just because Shaolin disciples are called monks doesn’t mean they can’t fight. Same rules apply here, most of them anyway. The engine powering the E 350d is a 3.0-litre turbocharged V6 which dishes out 258PS of max power and 620Nm of peak torque which is available from 1600rpm. Plus it’s mated to Mercedes’ new 9-speed GTronic transmission which sends power to the rear wheels. Finally, the new E also features five different driving modes, including a Sport and Sport+. So clearly, it’s got the credentials. In comfort mode it rides like a steamer on still lake water, easy relaxed and laid back. Despite a V6 throbbing under the bonnet, the cabin is almost as silent as a church under procession. Push it into sport, however, and the steering firms up slightly and so does the suspension and the throttle.

But the real difference becomes prominent when you go all the way and slot the car into Sport+. The steering becomes noticeably heavier and much sharper; the suspension immediately shifts to its stiffest settings. The throttle becomes sharper and the engine feels like someone has poked with the pointy end of a stick. The moment you press the throttle you feel the difference between the modes. Where even a longer depress was met with a relaxed compliance in comfort mode, in Sport+ there is a sense of absolute urgency. The car darts forward with purpose and as you approach a corner you brake hard and the brakes comply without hesitation and as you flick the wheel, the car turns in with ease. You hit the apex and throttle out -- it is at this moment that you feel the weight of the car. Due to its length and over 3-metre long wheelbase, you feel the weight shift mid-corner, which affects the confidence.

It doesn’t get out of shape, though, thanks to all the electronic aids like traction control and ESP and ADS, but it isn’t an enjoyable experience. But having said that, back off a little on the aggression and everything falls into place perfectly. Even in Sport+ the suspension feels firm and taut but never harsh. The body control is superb and even the gearbox complies with your inputs happily. The response from the box is immediate on the upshifts as well as the downshifts.

Finally, when you’re done having fun you can park the car with ease using the Park Pilot system. The system uses sensors and a series of cameras around the car to identify a parking spot and then after you give a go ahead, the car will literally park itself.

You mean to say there’s no fault in the car whatsoever?

I never said that. There are a few issues, like the rear of the car feels a bit empty. With the space freed up there isn’t much for the rear passengers to do. There are no infotainment controls at the rear and strangely, the cup holders have been skipped as well. And if we really nitpick here, maybe a massage function wouldn’t have been too bad.

But all said and done, no matter how you look at it, the Mercedes-Benz E 350d is a masterstroke from Mercedes. It is the perfect tool to attack the segment with in a country that loves to be chauffeur-driven. This not only holds the power to take the lead from its competition but can potentially change what customers expect from the segment. Yes, it will be considerably more expensive than the current model. We expect the E 350d to be priced around Rs 75.0-77.0 lakh, ex-showroom Delhi. But for the kit, comfort and road presence it offers, it should be worth every penny spent. Plus, Mercedes expects the car to be number one in the segment by next year, which given its credentials it shouldn’t be a tough nut to crack.

Phew, finally, I can go back to enjoying by job again.