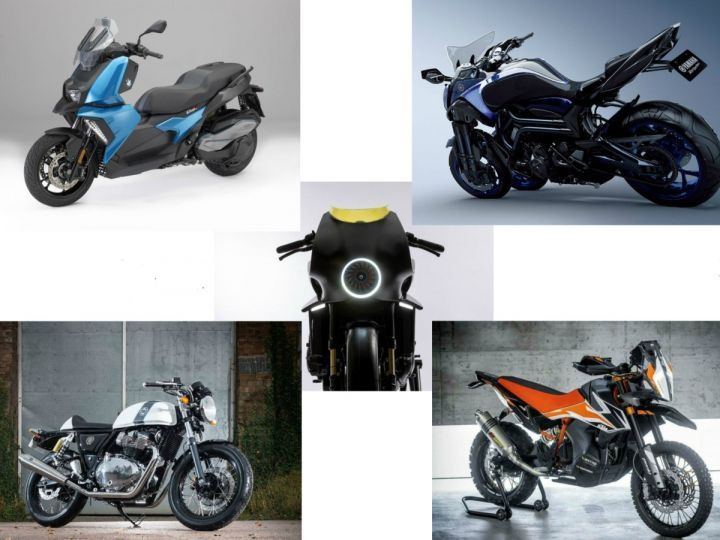 EICMA 2017 is officially over. There were a lot of interesting products at the Expo including the much-awaited Royal Enfield Twins. We have compiled our five favourite bikes from the show. Enjoy.

This is Honda’s vision for a ‘retro cafe racer of the future’. We think Honda should make it now! Designed by Honda’s R&D centre in Rome, the CB4 Interceptor is a design study, based on the ‘Neo Sports Café’ design theme which first debuted at EICMA in 2015 in the form of the CB4 Concept. The concept seems based off the CB1000R’s mechanicals. The frame is well hidden, only visible in the small structural unit which supports the subframe, footpegs and single-sided swingarm. The exhaust snakes from the engine and disappears into the rear tail piece.

The half fairing has a unique headlamp which is an LED ring around the fan. Honda says the fan converts the bike’s kinetic energy into electrical energy to power the touchscreen console. It is doubtful that the Interceptor concept will see the light of production but golly, we want one!

Yes, we know it is not a motorcycle in the real sense, but we think it looks uber cool. A three-wheeled er.. motorcycle aimed at the enthusiast, the Nikken is powered by the MT-09’s 847cc in-line 115PS triple that we so loved (read MT-09 review here). The Nikken will feature a manual transmission. Yamaha calls the Nikken a ‘cornering master’ and claims that it will redefine the way a three-wheeled bike slices through traffic. They say the bike will corner in a more stable manner than your average corner-carver, thanks to the extra contact patch two wheels afford.

The Nikken has a dual-axle steering mechanism, developed by Ackerman. Yamaha has also managed to keep the front track size in check. The Nikken is as wide as your large capacity superbikes. Yamaha plans to open up a new three-wheeler sports mobility segment with the Nikken. Where do we sign up?

Royal Enfield truly entered the world stage with its first new multi-cylinder retro twins. While both the Interceptor and the Continental GT 650 look old-school cool, we love the way especially the Continental GT 650 looks. The 60’s cafe-racer design has clean lines and a minimalistic design, and hides a hint of sportiness. The small stripe across the fuel tank further adds to its vintage feel.

The 650cc air- and oil-cooled parallel-twin motor has been developed to give out the characteristic RE vibe and exhaust thrum, but gets modern mechanicals which promise better refinement and reliability. We love it for the fact that it will be launched in India next year. We can’t wait to ride one!

This was a bit of a disappointment as the 790 Adventure R turned up at EICMA in concept form. Nevertheless, we love the way the bike features Dakar-ready styling cues and has a compact and minimal bodywork. The ample ground clearance should work well, while the lack of panels means the bike should be a featherweight. The large front panel on top of the mudguard liberates a lot of space for a stacked instrument console.

The 790 Adventure R concept uses the Duke 790 underpinnings and 799cc LC8-derived parallel-twin motor. It has tong-travel WP suspension components and sits on 21-inch front and 19-inch rear wheels. KTM will be launching the bike next year, though there are no plans to launch it in India anytime soon. Shame.

If a BMW R1200GS mated with a C600 GT scooter, this would be the result. The scooter gets GS-esque headlamp and a mis-mash of chunky side panels. Under the oddball unconventional looks hides smart packaging features. The seat opens to reveal a storage space for two helmets, while the front apron hides storage compartments under the handlebar. It gets a floating windscreen with a 6.5-inch TFT colour instrument console. The scooter also gets motorcycle-type suspension and 15-inch wheels. Braking is via twin-discs at front and a single rear disc. It gets ABS as well.

The two-tone bodywork hides a 400cc single-cylinder motor which makes 34PS of power and 35Nm of torque. It weighs 204kg and can hit a top whack of 140kmph. This is one uber cool scooter we wish BMW Motorrad gets to India.