Royal Enfield has taken the wraps off the new Interceptor and Continental GT 650, both powered by an all-new 650cc parallel-twin cylinder engine 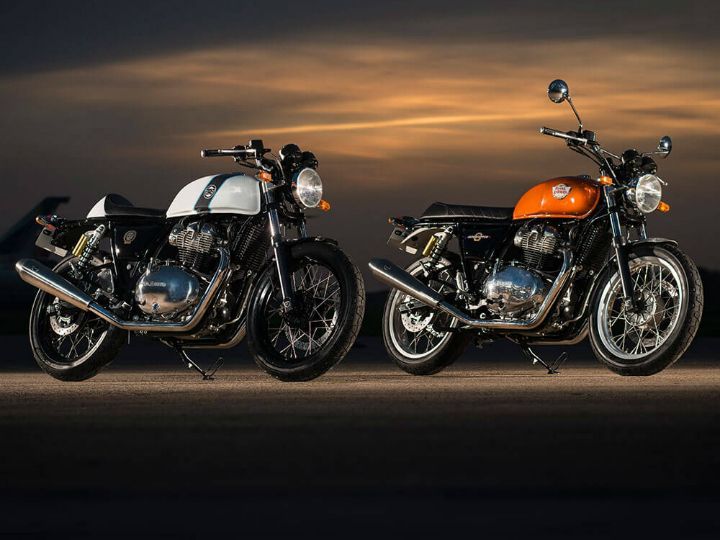 Royal Enfield revealed two new motorcycles at EICMA - the Interceptor and the Continental GT 650. Both motorcycles will be powered by the new 650cc parallel-twin that was revealed in UK earlier this week.

The Interceptor is a retro commuter motorcycle that Royal Enfield says has been designed to ‘ooze California cool’. The Interceptor features upright bars, mid-mounted footpegs and a dual seat as standard for a more relaxed riding position. The teardrop-shaped fuel tank can hold up to 13.7 litres, 1.2 litres more than the cafe racer-styled Continental GT 650. The Interceptor weighs in at 202kgs without fuel.

The Continental GT 650 looks a lot like the Continental GT 535 but RE say that as much as 95 per cent of the motorcycle is all new. It features low clip-on bars, rear-set footpegs and a single seat (which is an accessory) that makes for a more sporty riding stance that is typical of the cafe racer style. The tank is smaller to make a more compact riding position and holds only 12.5 litres of fuel. The Continental GT weighs in at 198kgs without fuel and that figure compares well with the 535 single which weighs 192 kgs with 90 per cent of fuel.

Both motorcycles feature a 1400mm wheelbase that’s just 40mm longer than the Continental GT. 41mm right-side-up forks up front and twin rear shocks maintain the retro look. Braking duties up front are taken care of by a 320mm disc (up from 300mm on the 535 single) and a 240mm disc on the rear wheel.

Both bikes have 6-speed transmissions with a slip-assist clutch, not so much for assisting with quick downshifts but more for the light clutch pull that is one the features of such a clutch mechanism.

The heart of the matter

The new 650cc parallel-twin is the really big news here, and after the LS410 motor powering the Himalayan, it’s another welcome step away from RE’s polarising pushrod single engines. The details sound promising: four valves per cylinder, 648cc, 270-degree crank and maximum power delivered at 7100rpm. Yes, it only features a single overhead camshaft but they have done away with the clattery pushrod technology. The power output of 47PS is not exactly a blow-you-socks-off figure, and, just to put this in perspective, the Kawasaki Ninja 650 twin makes 68PS from the same displacement. But it’s also not a very stressed engine either, with a compression ratio of just 9.5:1, which should give it longevity and longer service intervals. It’s also a very simple design, with air-oil cooling -- which means less moving parts -- and so it won’t be too complicated to manufacture and that should keep costs down.

You can expect this to be a refined, relaxed engine with plenty of torque, requiring fewer gearshifts and still allowing you to cruise down the road at highway speeds without too much fuss. The old thump that so many fans of the brand love will be replaced with a nice rumble from the 270-degree crank that produces an uneven firing order. This gives parallel-twins a more gruff rumble more akin to a 90-degree v-twin (think Ducati or Moto Guzzi) and is the same configuration used in the new Triumph Bonnevilles and the Honda Africa Twin.

Royal Enfield says that they wanted the new motorcycles to be a clear step up from their 350cc, 500 and 535cc engines, and yet not too powerful that it intimidates any existing or new customers. Its simplicity in design should ensure manufacturing costs are kept low and also allow for some aggressive pricing. How aggressive? In our estimates, both these motorcycles could be launched at a mouth-watering price of Rs 3-3.5 lakhs. Sales should start in April 2018 in Europe but unfortunately, India is not on the list of the first countries that will receive the first batches of the two twins.