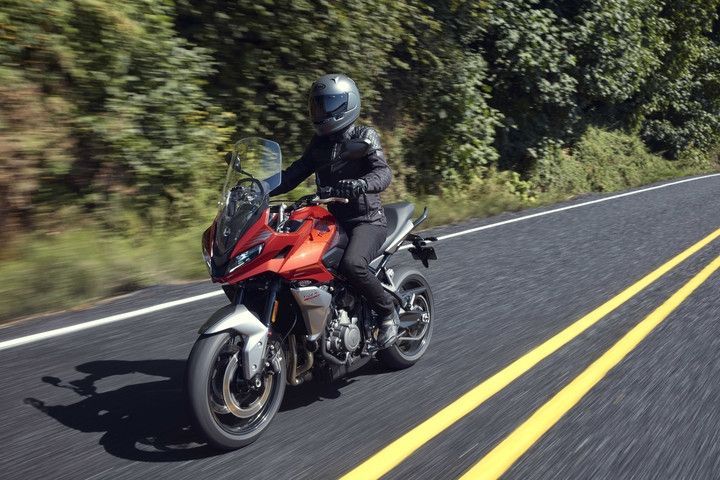 After tasting success with the Trident 660, Triumph Motorcycles has launched its touring-friendly sibling, the Tiger Sport 660 in India.

What's Its Price? Who Are Its Rivals?

The Triumph Tiger Sport 660 carries an introductory price tag of Rs 8.95 lakh, making it Rs 1.5 lakh more expensive than the Trident 660. This sports tourer will lock horns with the Kawasaki Versys 650, which costs Rs 7.15 lakh, and the Suzuki V-Strom 650XT, which costs Rs 8.84 lakh (all prices ex-showroom, India).

The Triumph Trident 660 gets distinctive styling, which bears almost no resemblance to any motorcycle from the manufacturer. However, the faux air intake in the middle and the twin LED headlight do remind you of the Triumph Daytona 675.

But Triumph has done a lot more than just slap a fairing onto the Trident. For starters, the Tiger Sport’s ergonomics have been heavily altered. The handlebar on the sports tourer is 40mm wider and sits on a riser. To complement this, the footpegs are positioned a bit lower and are slightly forward for a relaxed riding posture. Lastly, the seat has gone up to 835mm, which is 30mm more than its roadster sibling.

Triumph has even made changes to the chassis and used a sharper rake/trail setup. The 1418mm wheelbase is actually 17mm more than the Trident. The British marque has equipped the Tiger Sport 660 with longer travel suspension, offering 150mm wheel travel at both ends. Lastly, it gets a bigger 17.2-litre fuel tank, which is 3.2 litres more than that of the Trident. All the changes have resulted in a kerb weight of 206kg, which is 17kg more than the Trident.

The Triumph Tiger Sport 660 continues to use the same 660cc liquid-cooled inline three-cylinder motor, pumping out 81PS at 10,250rpm and 64Nm at 6250rpm. This motor is paired with a 6-speed gearbox with slip-and-assist clutch. Triumph has made no changes to the state of tune of the engine, too.

Electronic aids on the Triumph Tiger Sport 660 include two riding modes: Road and Rain (same as the Trident). It also includes switchable traction control and ABS. All of these settings can be accessed via a TFT display with optional Bluetooth connectivity.

Triumph has even retained the 5-spoke alloy wheels shod with stick Michelin Rad 5 tyres. Braking hardware consisting of 310mm discs up front with radial calipers and a 255mm disc at the rear is also shared with the Trident 660.

The Triumph Tiger Sport 660 enjoys a unique proposition in the market of being the only inline triple motorcycle amongst its competitors. Not only does it feature fresh styling but also offers decent electronic aids. While the bike definitely has potential, it is undoubtedly a pricey proposition. And with the 2022 Kawasaki Versys 650 launch on the horizon, the Tiger Sport definitely faces serious competition. Now, both these bikes are road-focused, so if you are looking for something more with off-road credentials, the Suzuki V-Strom 650XT is an enticing option.