How Different Is The Tiger Sport 660 From The Trident 660?

The two differ in design, ergos, features, and underpinnings (to some extent)

[Update: Triumph has launched the Tiger Sport 660 in India at Rs 8.95 lakh (ex-showroom pan India). Read our launch story for all the details.] 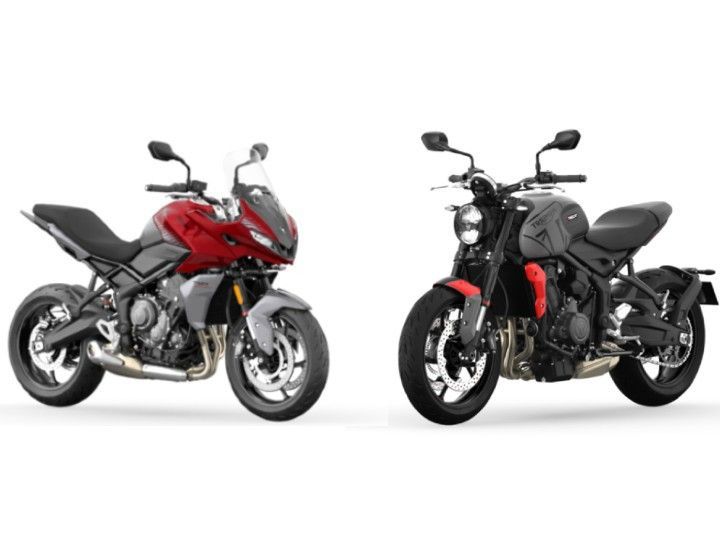 After a few teasers, Triumph finally unveiled the Tiger Sport 660 yesterday. It’s set to be the most affordable model in the Tiger lineup and the second most affordable offering from the bike maker after the Trident 660. Now, it's no secret that the Tiger Sport 660 and the Trident 660 share the same platform. But there are some key differences between the two middleweight siblings, which we’ve addressed all of them below.

First up, the most obvious one:

Built from the ground up, the Tiger Sport 660’s half fairing makes it a butch-looking motorcycle. It also houses the new split headlight, unlike the Trident 660’s round unit. You get a fairly tall and transparent visor on the Tiger 660 to aid its touring purpose.

Even the radiator shrouds are different in both size and shape. While the rear has been carried forward from the Trident 660, the swingarm-mounted tire hugger has been replaced by a conventional tail unit.

The Tiger Sport 660 has slightly more relaxed ergos than the Trident 660. The rider triangle is altered, thanks to the 40mm wider handlebar mounted on risers and the forward-set footpegs, which seem to be in line with the rider seat.

Triumph has equipped the Tiger Sport 660 with a slightly different instrument cluster from the Trident. You get two split screens with the tachometer, fuel bar, and speedometer in the LCD unit, while the gear position indicator and clock are at the bottom (TFT). On the other hand, the Trident 660 gets a full TFT display.

Triumph has increased the suspension travel on the Tiger Sport 660 by 30mm at the front and 16.5mm at the rear. Both front and rear suspensions now have 150mm of travel. We hope this offers a plush ride, unlike the Trident 660.

The monoshock now gets a remote preload adjuster, which eliminates the hassle of using specific tools. The steel swingarm has also been elongated to aid better weight management, considering the Tiger Sport 660 weighs 206kg, 17kg more than its sibling. The wheelbase has also increased to 1418mm, 17mm more. The mainframe hasn’t changed, but the subframe has been altered because of the extra luggage mounting points and load.

Last but not least, the Tiger Sport 660 gets a 17.2-litre fuel tank against the Trident’s 14-litre unit.

We expect the Triumph Tiger Sport 660 to be priced at around Rs 8 lakh (ex-showroom). The Trident 660 retails at Rs 6.95 lakh. Once launched, the former will go up against the Kawasaki Versys 650.