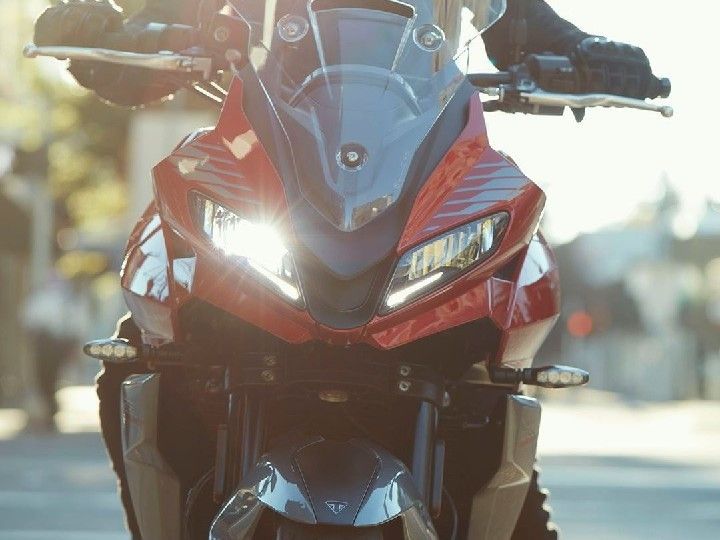 Back in August, Triumph teased the upcoming Tiger Sport 660 prototype with black and white camouflage. Now the British marquee has dropped a new visual of the production version and is all set to officially unveil the bike on October 5.

Draped in red, the Tiger Sport 660 gets quite a sharp front fascia that seems to be completely new, without any inspiration from any of the bigger Tigers. You get a split LED headlight setup with DRLs,topped by a large clear windscreen. The face of the new Tiger Sport 660 does remind us of some Japanese bikes, and that’s a compliment!

The Tiger Sport 660 will be the most affordable bike in the Tiger range. The 660cc liquid-cooled inline triple motor will be lifted straight from the Trident 660, albeit with a slightly different tune to suit its touring purpose.

Unlike the naked Triumph middleweight, the Tiger Sport 660 will have longer-travel suspension to better suit its character. However, the adjustable levers, brake, wheels and frame remain the same as the Trident.

Other changes like a wider handlebar, longer seat and neutral set footpegs are also visible on the new Tiger Sport 660, which should make it an able tourer.

Considering it’ll be the most affordable Tiger, expect Triumph to price the Tiger Sport 660 around Rs 8 lakh (ex-showroom). While it might not be able to match the value quotient of the Kawasaki Versys 650, the British bike will definitely have much better kit and dynamics.