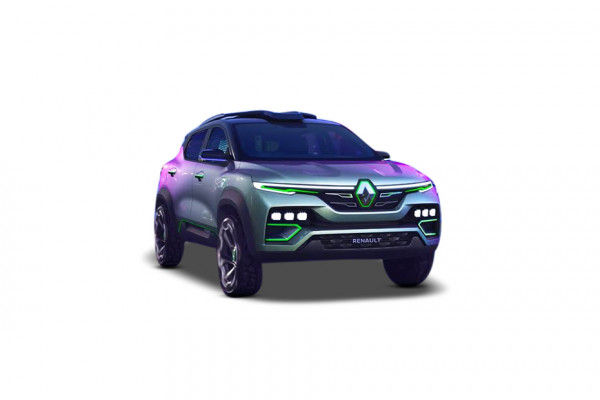 Rate this car
Alert me when launched Ask A Question

Renault has previewed the concept version of its first-ever sub-4-metre SUV, the Kiger. The carmaker has stated the production spec model will have around 80 percent similarity in terms of design. The Kiger will be launched in the Indian market possibly by March 2021.

The Renault Kiger is essentially a Nissan Magnite with Renault’s suit. It gets a bold appearance thanks to its signature front grille and the sleek headlamps with the DRLs running across the width. The profile looks meaty with significant haunches and large 19-inch alloy wheels. Rear-end comprises of C-shaped LED tail lamps and a butch bumper.

The feature list is yet to be revealed but is likely to follow its sibling, Nissan Magnite. Being children from the same parent company, the carmaker is expected to spec the Kiger with a touchscreen infotainment system with Apple CarPlay and Android Auto, digital instrument cluster, cruise control, connected car tech, steering-mounted audio control and keyless entry with push-button start. In terms of safety, Renault should pack the Kiger with up to four airbags, ABS and EBD, electronic stability control, parking sensors and rear view camera.

Renault Kiger is going to launch in India with an estimated price of Rs. 5.50 Lakh

What is the expected price of Renault Kiger?

The price of Renault Kiger is expected to be Rs. 5.50 Lakh.

What is the launch date of Renault Kiger?

The estimated launch date of Renault Kiger is March 2021.