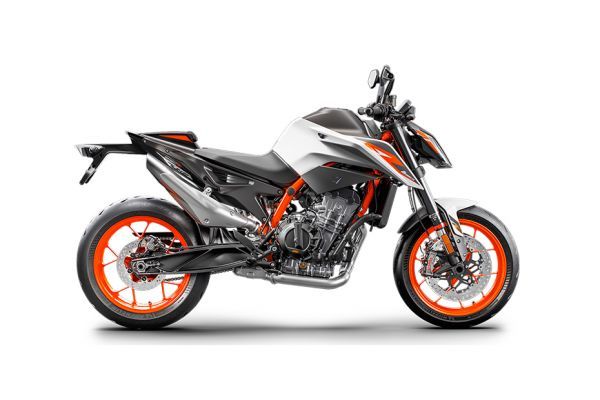 The KTM 890 Duke R was unveiled at the 2019 EICMA. It is essentially a bored-out version of the KTM 790 Duke with premium underpinnings and features. Powering the bike is the KTM 790 Duke’s liquid-cooled, parallel twin engine but its capacity has been increased from 799cc to 890cc. This has resulted in an increase in power output from 105PS to 121PS. Even the peak torque is up from 87Nm to 99Nm.

Unlike the KTM 790 Duke, the 890 Duke gets fully adjustable WP Apex suspension on both ends. Even in the braking department, it receives superior Brembo Stylema radial calipers up front, holding a set of bigger 320mm discs. The rear retains the 240mm disc brake setup. For superior grip, the motorcycle packs Michelin Power Sport II tyres instead of the 790 Duke’s Maxxis Supermaxx ST rubber.

As far as the ergonomics are concerned, the handlebars are flatter, lower and have been moved further forward. The seat height has been increased from 825mm to 840mm and the footpegs have been moved further back for even greater cornering clearance. All these adjustments should make the overall riding position even sportier. The KTM 890 Duke R is likely to be launched in India in mid-2020 and could command a premium of about Rs 1 lakh to Rs 1.5 lakh over the 790 Duke. For reference, the KTM 790 Duke is priced at Rs 8.5 lakh (ex-showroom). In terms of competition, the 890 Duke R will go up against the Triumph Street Triple RS, upcoming 2020 Kawasaki Z900 and Yamaha MT-09.