Mahindra of late has pleasantly surprised us in the last couple of comparisons we’ve run, first with the Marazzo and then with the Alturas G4. This time around we have the petrol-powered XUV300 pitched against its nearest rivals. Can the Mahindra manage to better Ford’s EcoSport and Tata’s Nexon in this round? 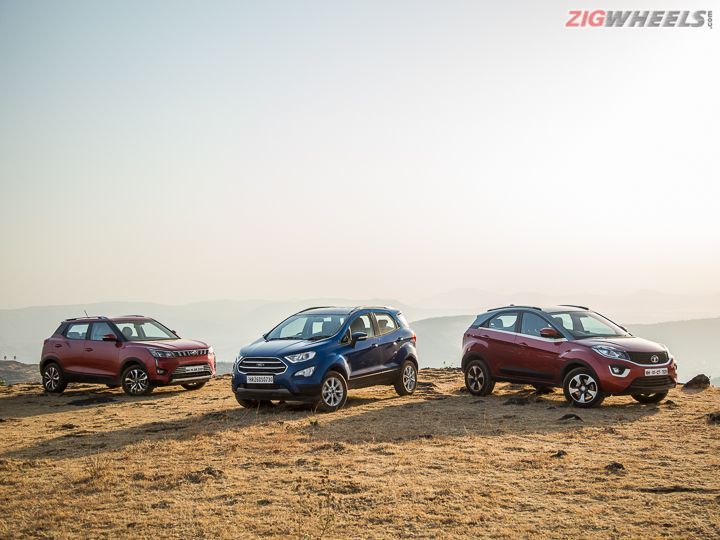 These petrol powered sub-4s are also the cheapest way into the world of SUV-esque four wheelers. Armed with technology like turbos and ride-by-wire throttles with eco modes, these petrols can be quite economical. And with the narrowing gap between petrol and diesel prices, they make a lot of sense too.

Looks
The EcoSport is the pioneer in this group and it’s been around for the longest time. Ford though seems to have thrown this early advantage away by not taking the opportunity to radically change its appearance. There have been two feature and mild cosmetic updates since late 2017 and these have added 17-inch alloys, LED DRLs, and projector headlamps that sit in larger headlamps. And while the EcoSport with it’s chunky grill, tall bonnet and flared wheel arches does look good, it’s all too familiar now.

The Nexon also made a big splash in 2017 with its comprehensive feature set, contemporary looks, competitive drivetrains and a very balanced handling package. But the Nexon’s quirky design, rounded edges and that signature sash that runs the length of its shoulder line has aged rather quickly and we all felt that of the two older cars in this test, it needed a pick-me-up most.

The XUV300 takes things back to basics in the looks department. It’s squarish dimensions remind one a little of the Maruti Suzuki Vitara Brezza. Being a Mahindra, you have your signature accent lines over the wheel arches. But unlike some of its other stablemates (KUV100, XUV500), the curves are more subtle and much better executed here. The standout features are those large DRLs that run all the way around the top of the headlamps right down into the fog lamps.

The one angle where the XUV300 does look a little disproportionate is side-on where the large bonnet and stubby rear end look a little odd. Considering that Mahindra have had to shorten the Ssangyong Tivoli to make it fit under four metres, this is understandable though. We also liked the tail lamps that really stand out in the night and add to the character of the otherwise stubby rear end.

Features, space and safety
Feature wise is where the Ford has undergone the biggest change. The last update in mid-2018 gave it a sunroof and a large 8-inch floating touchscreen infotainment system, which together have managed to spruce things up on the inside. The Ford has always been the standard in the segment for its solid build and the quality of materials used and now it sports interior design and features to match.

We do wish that the all black interiors could have changed to lighter colours to brighten up the cabin a bit. The rear seats have you sitting nice and tall and offer an SUV-ish experience even if there is a distinct lack of shoulder room to fit three abreast.

The seats themselves won’t see rear passengers complaining much as long as the roads are smooth, but we’ll come to that later. The top two variants (S, Titanium +) get six airbags while two front airbags are standard across the range.

Having only arrived on the sub-4 metre scene in 2017, the Nexon hasn’t had the benefit of a mid-life update yet and so it sports the oldest feature list here. There’s nothing missing really with a floating 6.5-inch touchscreen infotainment system with Apple CarPlay and Android Auto, steering mounted controls, rear parking camera and a delightful sounding eight speaker Harman sound system.

But we still don’t like the tambour door storage compartment in the central tunnel that is too narrow for you to lift anything out of.

The cabin space is well utilised though and the Nexon gives second row passengers the most knee, shoulder and headroom in addition to being the only car here to offer rear AC vents. But in this company, the Nexon misses out on some wow features like a sunroof or more than just the standard two airbags in the higher variants.

The XUV300 also feels well built like the EcoSport and similarly offers you an extensive feature that includes a sunroof, an auto dimming IRVM, leatherette upholstery, cruise control and a touchscreen infotainment system with Android Auto and Apple CarPlay. It also brings firsts to the segment like dual zone climate control, heated wing mirrors, steering modes and a tyre position indicator. It even features an adjustable headrest and three point seatbelt for the middle passenger in the second row as well.

But there are some areas it is lacking in. Under thigh support and headroom in the second row is poor and that stubby rear end has resulted in a miniscule boot which can only hold 259 litres worth of luggage. It’s the smallest in this test and a good 90 litres down on the other two. But it does feature the best safety package on paper with seven airbags and disc brakes on all four wheels.

Performance and handling
Looking at just the numbers, it’s the Nexon that jumps out of the box first when you push pedals to the metal. It’s the fastest in the sprint to 100kmph with a quick time of 11.64s while the EcoSport and the XUV300 are in the 12s. That’s down to it having more torque than the Ford and the XUV300’s software not allowing a more aggressive launch off the line, even with traction control turned off. The Nexon is a bit of a handful to drive in the city with drive starting at 1500rpm and the turbo only really kicking in past 2000rpm. This means that you need to work the gearbox to keep the Nexon eager, especially when driving on a ghat road.

The XUV300, with it’s bigger turbo and segment leading 200Nm of torque, has much better drivability which is demonstrated in the 3rd and 4th gear roll-ons. It’s over two seconds faster than the Nexon in third and it leaves the other two far behind in fourth. This translates to great driveability in the city where you don’t need to keep shifting gears too much and is also great out on the highway where just a prod on the accelerator, even in top gear, is enough for most overtakes, where the other two would need to drop a gear. On the ghat roads on the way up to Panchgani and Mahabaleshwar, it clearly had the most drive out of corners.

It also handles curves in a very flat and predictable manner and features the most balanced set up of the three. Regular bumps are dispatched without any fuss and it even settles down after a big jolt quickly. Some thuds are heard in the cabin but aren’t felt quite as much.

The EcoSport, being the only with a naturally aspirated engine here, is by far the smoothest of the three. But while there is no turbo lag or head nod from a turbo kicking in, it also requires you to drive in a calm and collected fashion. Even Ford’s nice chassis and handling package is not enough encouragement to try and push the 1.5-litre Dragon petrol to it’s limits. If you are an enthusiastic driver and must have a Ford, then you could consider the EcoSport S which sports the 1.0-litre EcoBoost turbocharged engine.

Of the three, the EcoSport lags behind a little when it comes to it’s ride quality. Despite some small suspension tune changes when it was updated in 2017, the bumpy ride for second row passengers persists and it’s not quite as composed as the other two over larger bumps.

That is something that the Nexon doesn’t suffer from. While it doesn’t quite handle as nicely as the Ford or even the XUV300 around corners with a little roll creeping in, it best insulates passengers from bad roads. Large and medium bumps are tackled with ease and without a complaint, read that as suspension noise from the wheel wells. It does tend to rumble over the smaller bumps a little but that’s our only complaint.

The Nexon, with it’s different drive modes, can also be a little inspiring. The 1.2-litre turbo has a reasonable surge of power near about 4000rpm, and if you’re in the mood for some hooning it’s exciting enough to keep you chasing this surge through the 6-speed gearbox. It would have been even more fun if the gear ratios were shorter and closer together but alas, we live in a world where efficiency is a big consideration.

So how efficient are they? While all manufacturers claim a healthy 17kmpl from each of these petrols, our real world numbers found that the Nexon with it’s eco mode is the most efficient delivering 14.03kmpl in the city and 17.89kmpl on the highway. The EcoSport was a close second posting a similar 17.59kmpl on the highway but dropping down a little to 12.74kmpl in the city. The XUV300 was similarly efficient in the city at 12.16kmpl, but on the highway it only managed 14.25kmpl. This is down to the fact that at 100kmph, the engine is ticking over at 2100rpm and that big turbo is spooled up and dumping more air and fuel into the 1.2-litre engine. If you can manage to keep closer to 80kmph on the highway, your efficiency should increase.

Pricing
The XUV300 leads the way when it comes to prices too and this top-spec W8 (Option) dual-tone variant we had for this test retails for Rs 11.64 lakh (ex-showroom Delhi). The Nexon, at Rs 9.31 lakh, is the bargain of the bunch and even if you opt for the automatic (Rs 9.91 lakh) it’s cheaper than the other two. The EcoSport we had on test was the Titanium variant which retails for Rs 9.55 lakh in this spec. The Titanium+ is more feature loaded and costs Rs 10.52 lakh and prices rise up as high as Rs 11.37 lakh for the EcoBoost engined EcoSport S.

A point to note is that both the Nexon and EcoSport at the moment are available with automatic options. The EcoSport features a better 6-speed automatic but only with this 1.5-litre petrol engine, while the Nexon can be had with an AMT with both diesel and petrol motors. The Mahindra has been spotted undergoing tests on a number of occasions with an AMT, but that is only expected later on in 2019.

Verdict
The XUV300 impressed us with it’s great in-car experience, power and handling prowess. It does have a few limitations like the miniscule boot and poor highway economy and it’s the most expensive as well. But it justifies that higher asking price with a much larger feature set, better safety package and overall driving experience. If you spend a lot of time enjoying your driving and boot space and mileage doesn't erk you too much, the XUV300 is the best option in this segment. The EcoSport and the Nexon are no slouches though and if you wanted a more family focused car that would please everyone and is lighter on the pocket as well, the Nexon will fit your bill. The EcoSport offers a great cabin experience with quality interiors and tech to match as well. The lower variants are pretty well equipped, making the Ford one of the more balanced picks out there.