For your first big bike experience, should you spend more for more performance and gizmos or save some cash for surging fuel bills on a simpler motorcycle? 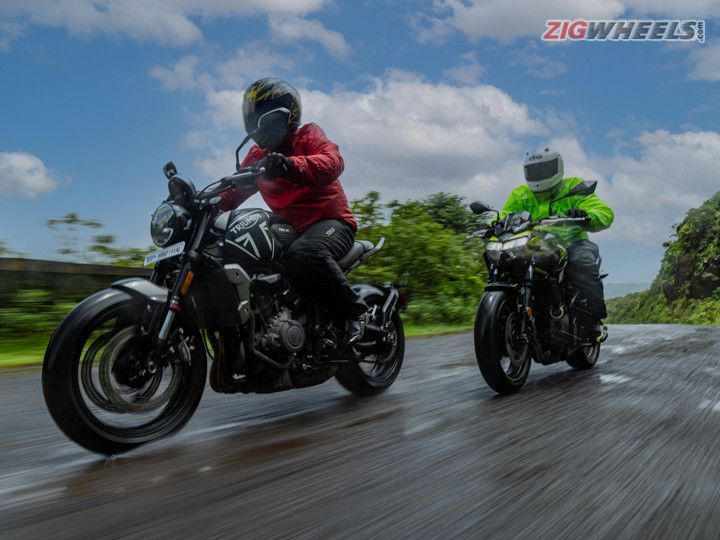 For years, the Kawasaki Z650 has been the go-to choice for first time big bike buyers, at least for those who prefer nakeds over faired sportbikes. It has been a sweet machine with punchy performance and a rather striking design. In 2021 though, budding Indian enthusiasts got two more options: the Triumph Trident 660 and the Honda CB650R.

While the twin and the triple are reasonably priced, the inline-four Honda carries a pretty steep price tag, one that makes it a bit too expensive for a newbie and thus, not befitting the aim of this comparison. With that established, is the Triumph worthy enough to steal the crown of the perfect first big bike away from Kawasaki, or does the Zed still make good sense?

Since the buyer of this segment doesn't have the luxury of owning multiple motorcycles, the Trident 660 or Z650 would have to do it all. That means, it is primarily going to spend its time in the urban jungle.

Here’s where the Kawasaki shows why it has been a crowd favourite. The easy-going 649cc parallel-twin engine has healthy low- and mid-range grunt. It doesn’t mind being ridden slowly in higher gears and you can get past slow moving traffic in a jiffy by simply rolling on the throttle. Clutch action is lighter and gear shifts are slick and positive.

The Triumph is not taxing, though. Our in-gear roll-on acceleration timings actually showed that it was the quicker of the two bikes. However, from the saddle, it doesn’t feel as eager as the Kawasaki and might need a quick downshift to keep it in the sweet zone. Speaking of which, the slipper clutch of the Trident feels a bit heavy and gear shifts, while positive, aren’t always buttery smooth.

Where the Trident excels is engine refinement. While trundling along at city speeds, or even when out on the highway, the triple turns out to be smoother than the twin. You do get a light buzz when you roll on the throttle, though, which isn’t bothersome. Surprisingly, the Kwacker feels buzzy all through its rev range. You can feel the vibes at the bars, pegs and around the tank. The vibes are more pronounced as the revs start building.

Also, while the Kawasaki is tighter and easier to steer through traffic, you feel more confident on the Trident. The wider bars provide plenty of leverage and since you are sitting on the bike, rather than in it, making quick maneuvers feels more natural.

The Open Roads
When you do take on the occasional weekend trip, you would definitely enjoy the Trident more. It is the quicker motorcycle of the two and loves being ridden fast. Even though there is no wind protection, wind blast is more controlled as the Trident remains settled at speeds in excess of 120kmph. And its spirited performance is matched by an equally enthralling soundtrack. There’s not much of the triple whistle here, instead you get an angry growl that just gets louder as the revs build up, making the hair on the back of your neck stand up.

The Z650 on the other hand doesn’t like high speeds as much. It can sustain 120kmph but is slower to react post that. And it isn’t just the motor, even the rider struggles at higher speeds thanks to the upright posture. This creates an air dam of sorts and hence, wind blast isn’t as easily managed.

What does help the Kwacker’s case is its frugalness. Both in the city and on the highway, the Zed’s twin pot mill delivers higher fuel efficiency. And with its larger fuel tank, you will be able to ride for far longer than you would on the Triumph.

The Twisty Bits
When we were conducting the review, our favourite set of twisties were destroyed by the monsoons. Rocks strewn across the road, new potholes and gravel kept us on our toes. While dodging these obstacles and still enjoying what was left of the mountain road, we came to a clear conclusion in the Trident’s favour.

Firstly, the brilliant Michelin Road 5 tyres provided phenomenal traction, even in treacherous conditions, which is not what you would say about the Kawasaki’s Dunlop Sportmax Roadsport 2. They simply failed to inspire any sort of confidence and caused some nervy moments in the wet.

It’s also the Trident’s tubular steel perimeter frame that makes it such a capable handler. Considering that Triumph wanted to make a motorcycle that would be somewhat of a middle ground between a sub-400cc bike and the Street Triple series, the handling is on point. It is quick and sharp, though not as much as the hallowed Street Triples. The deep connection that the rider feels with the Trident also makes cornering a really fun activity.

The suspension is set up on the firmer side, though. Mid-corner bumps do have a tendency to unsettle the bike a bit, which can get a bit scary for newbie riders. The firm ride was bothersome in the city as well as you could feel every ripple on the road. No such qualms on the Kawasaki as the simpler suspension has a plush tune. It absorbs bumps beautifully and the ride never gets jarring.

Lastly, the brakes on the Trident are far more potent and assuring than the Zed. The fierce brake bite and great lever feedback means you can really modulate how much brake pressure you want to dial in. The Kawasaki is fairly stable when braking too. But it takes quite a lot more distance to come to halt and the vagueness at the levers is disheartening. The poor grip levels of the Dunlops share some of this blame.

Big Bike Feel
This might sound vain but one of the major reasons why most Indians buy a big bike is to be seen astride something big and substantial. And that’s something you cannot say about the Trident.

It is small and petite, almost reminiscent of the original Pulsar 150 (you know, the one with the round headlamp). Now, it has some neat design elements, like the round headlamp, circular console and a bulbous fuel tank, which are inspired by the Bonneville series. You also have a few Italian cues, like the stubby tail with its clean airy look. But as a whole, it doesn’t come together to make you feel like you have bought something special. It feels regular, and that’s hardly the word you would want to use to describe the way your big bike looks.

Following the Sugomi design language, the Z650 looks and feels properly big. The chiselled fuel tank, the exposed frame, and the sharp tail all contribute to make it feel muscular. The Z-shaped LED tail light is quite unique and a nice touch. The grab handles, while serving their purpose well, are an eyesore, though.

Even from the saddle of the Kawasaki, you feel that you are atop a big bike. The seat is large and roomy and the tank recesses allow you to straddle the bike well, which adds to the Zed’s sense of size. And it’s also got some properly premium bits such as the crisp colour TFT dash. The console is Bluetooth-enabled too, but this doesn’t serve any other purpose than being a pure data logger.

The Triumph’s compactness does make it more accommodating. Even though you are seated higher, flat footing the bike isn’t much of an issue. When it comes to the Trident’s console though, toggling through the menu isn’t intuitive and can be really confusing at first. That said, you can pay for the MyTriumph connectivity module which unlocks turn-by-turn navigation, phone and music controls and you can even operate basic functions of your GoPro from the bike’s switchgear.

Fit and finish levels are definitely better on the Triumph. The switches have a positive and solid feel to them. Quality of plastics used is definitely of a grade higher. Overall, it is put together far better than the Zed.

The Trident gets two riding modes (Rain and Road) with dedicated levels of traction control (which can be switched off completely too), ABS intervention and throttle maps. Newbie riders will appreciate the presence of Rain mode, however you will soon outgrow the need of the ride mode and stick to Road.

So The First Big Bike You Should Get Is…
… the Trident Trident 660. Hear us out. The Kawasaki Z650 (Rs 6.24 lakh) is cheaper than the Triumph by a solid Rs 71,000 and certainly is a friendly and usable motorcycle. Its easy going nature will please a lot of buyers and so will its frugality. However, the Trident delivers better on the sort of performance you’d expect from a “big bike” and this, in our books, makes it better value-for-money. The premium is well justified for the thrills you experience, courtesy of the 660cc triple engine. It handles well, and like a patient teacher, builds you up nicely for larger capacity motorcycles that you’d most likely upgrade to after a few years. 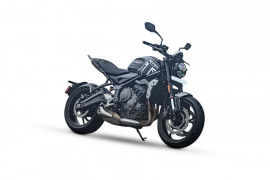 All Comparisons of Trident 660