The Audi RS Q8 packs in three or four times as much joy than you could ever get from any two-seater sports car. Don’t believe me? Read on to find out how. 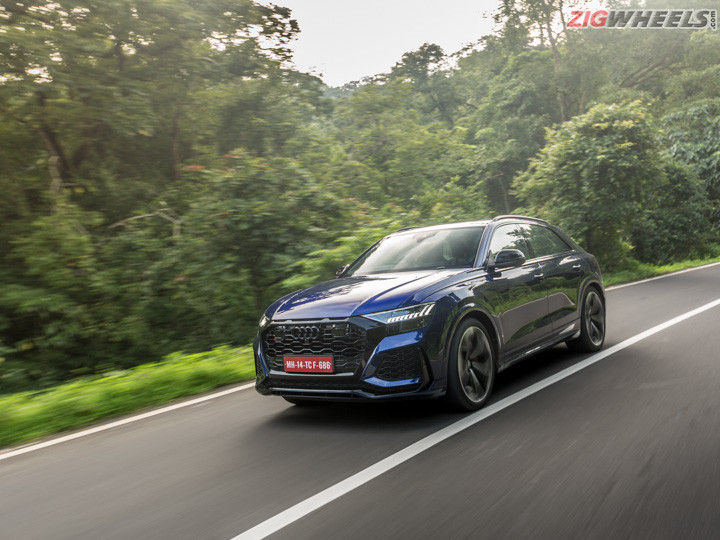 Sports cars with this much power and performance are a mountain of fun. I’ve driven a handful over the years as an auto journo - the Jaguar F-Type, Audi’s RS 5 and even the Audi R8. They were all pure joy in their own unique ways and each of them stimulated all the right aural and physical pleasure points of a car nutter's anatomy. The RS Q8 packs in a big punch with 600PS and quattro all-wheel drive so it certainly manages ‘fast’ easily enough. But its size and weight certainly mean that it couldn't possibly match their agility, right? Still, I promise you that in some ways it can give at least 3 or even 4 times the pleasure any regular sports car can. But first let’s see what it’s all about.

Our timing equipment doesn’t lie, but 3.82s for a 2.4 tonne SUV sounds like a fib. Yes, it has all wheel drive, 600PS, 800Nm of torque and launch control to make sure you hit that number consistently but it still doesn’t make that figure any more believable. But it is true and the RS Q8 has the honour of being the fastest car we’ve ever tested here at ZigWheels.

Even after a couple of runs it still has the ability to catch you off-guard and when you find enough of an open stretch of road and floor the pedal. It leaves you wide eyed at first and then as you back off again a big smile starts to form from the big ‘Oooooh’ that your lips first mouthed as the brutal acceleration slammed you back into your seat.

That big TFSI V8 which was burbling away at part throttle picks up to a loud grumble at full bellow. It’s not quite the harsh bark that it makes in the Lamborghini Urus (almost the same SUV but we’ll come to that in a bit) but still loud enough in the cabin and more than loud enough to turn heads on the road.

And that’s not the only thing it can do brilliantly either. It’s equally adept at stopping too, managing to come to a stop in just 34 metres from 100kmph. That’s just one metre further than the RS 5, a much lighter sports car, and still the shortest stopper we’ve ever tested. But after looking at the massive 295-section tyres and 420mm brake discs sitting inside the 23-inch rims, gripped by 10 piston calipers, its stopping prowess isn’t really too much of a wonder. And if you were wondering just how large 420mm discs are? Well those brake discs are just half an inch smaller than the 17-inch rims on the top-end Hyundai Creta. And for even more stopping power there are even larger 440mm ceramic discs as an optional add on too.

So it shoots off the line like a bullet and stops quickly too, but how it goes around corners is the next thing on your mind, right? Surprisingly, it stays very flat around the corners. Yes, there is a little bit of roll that’s not very sports car-like but the speed that you can carry around corners with heaps of confidence is very un-SUV-like too. The handling is really quite neutral and it turns in sharply and it’s easy to hold a tight and fast line through a corner too. The weight only really shows up in quick direction changes. So while the true agility of a sports car is slightly blunted there’s little wonder why the RS Q8 is currently the fastest SUV around the Green Hell.

The tech that makes this possible

There’s quite a bit going on behind the scenes with this big burly SUV that gives it the right to wear that RS badge with pride. The 4.0l TFSI V8 sends power to all four wheels via Audi’s signature quattro all-wheel drive system with an optional sport differential. This is capable of sending as much as 84% of power to the rear wheels when needed to give it a nice rear wheel drive feel. It’s also a version of the same engine Tushar experienced in the Lamborghini Urus, albeit with a slightly softer voice and a few ponies less. It also features 48V mild hybrid tech and cylinder deactivation to boost efficiency.

The RS Q8 also rides on air suspension. This means that changing the mode to Sport or even simply hitting the RS button on the steering wheel will drop the body down for better performance through corners. And this also means that it can also be raised, quite significantly, to ride over bad stretches of roads as well. Active dampers can also turn the ride from firm and sporty to quite comfortable over regular roads.

There is even rear wheel steering which at lower speeds can be seen turning in the opposite direction to the front wheels for really tight u-turns. At higher speeds they turn in the same direction of the fronts and this allows for more stability.

Those massive tyres have heaps of grip but there is also a very precise traction control system that manages to transfer as much of the 600 horses as possible to the ground as efficiently as possible. And even on a slightly slippery surface with loose pebbles it won't allow the wheels to break traction and still won’t completely bog down either, as we found out when my photographer wanted an action shot with a bit of drama on a slightly loose surface. I complied with a full power launch but my photographer was left quite disappointed with the lack of wheelspin drama that looks beautiful in pictures.

Then there are the active roll bars that control roll through corners by stiffening the chassis dynamics up. And when the system detects you are on straight roads it deactivates to keep the ride comfortable again. There’s also the drive select mode with two customisable RS modes that are linked to an RS button on the steering wheel for your favourite two sports settings. Audi  will even unlock the stock 250kmph top speed cap to 305kmph if you so desire.

The cockpit is also nicely focused on the driver with a customisable all-digital MID and a heads-up display with a cool coloured RS mode.

The RS Q8 packs a lot in terms of creature comforts so there’s powered driver and passenger seats which are also cooled, heated, and have an optional massage function. Two massive touchscreens, 4-zone climate control with an air purifier, ambient lighting, 10-speaker 180 watt audio system. There’s a heap of materials and finishes to choose from when customising the interiors with carbon fibre, metal finishes and wood inserts and alcantara options and the features list continues on and on. Since it’s based on the Q8, the flagship SUV in the Audi lineup, the quality is top notch. Of course there are other SUVs that will pamper you more, especially in the rear bench. But the RS Q8 clearly places the focus on the front seat experience so while it does strike a bit of a balance between the two the emphasis is clearly on sport.

In terms of looks there’s enough going on to distinguish it from just another big SUV, with a large grill, blacked out Audi logo, big air dams below the distinctive Matrix LED headlamps hinting that something special is going on with the RS Q8. In profile the insane 23-inch wheels really do stand out more than the sharp typical Audi silhouette. At the rear the LED combination lamps are the highlight as they are in the regular Q8, and their welcome and goodbye dance is just as impressive in a dark parking lot. Having seen this car in this deep blue colour and also having seen the bright green one in the Audi launch footage we do have to say that brighter colours will make the whole design pop a lot better.

If you consider that it can seat 4 in comfort, even 5 in a pinch, has 605 litres of boot space for a family road trip, and has creature comforts like ventilated seats with a massage function, a large dual pane sunroof, and even the ability to step off the beaten path if you are careful with those low profile soft compound tyres, then it’s hella practical. In fact seeing that most SUVs are confined to strictly urban environments this is just as practical but a whole lot more capable in the fun department. If you are to compare it to a sports car with similar performance, its utility multiplies ten fold. And with everything switched to comfort and up to four cylinders deactivated when you don’t need all 600 horses, it’s quite comfortable around town too.

The most expensive Audi you can buy

At an ex-showroom price of Rs 2.07 crore it is the most you can spend on an Audi in India at present and it’s also the most expensive RS badged Audi ever. In terms of competition its real rivals in terms of performance are the Porsche Cayenne Turbo (Rs 1.92 crore),  the Lamborghini Urus (Rs 3.1 crore) and the Bentley Bentayga (Rs 3.78 crore). All big, powerful petrol SUVs at different price points and different appeals.

Really powerful sports cars are a bit like roller coaster rides in that they scare you and the adrenaline rush that the fear brings fills you with a sense of euphoria. But most sports cars also just have two seats so sharing this experience is usually with just one special person. But if, like me, you like sharing in your joy then no two-seater can come close to the ability of the RS Q8. And this is just what happened when the car was delivered to my residence for the test the next day.

My wife, her cousin and brother-in-law were enjoying an evening at home and had absolutely no idea what was in store for them when I took them for an evening spin. On an open stretch of road I managed just one blast in full launch control mode and the squeals and oohs and ahhs that followed were almost loud enough to drown out the V8 rumble emanating from those tail pipes. It was dark but I was just about able to make out their wide open mouths crack into big smiles and maybe even a teary eye or two in the rear-view mirror. So my verdict is this, if your CA is happy to sign off on 2 crores and change and you’d love to share that thrill with more than just one family member at a time, then the Audi RS Q8 is 3 or 4 times better than any two seater sports car, isn’t it?