Lamborghini’s first new SUV since 1986 promises to make the bull’s rage more accessible. Is it a true Lamborghini? 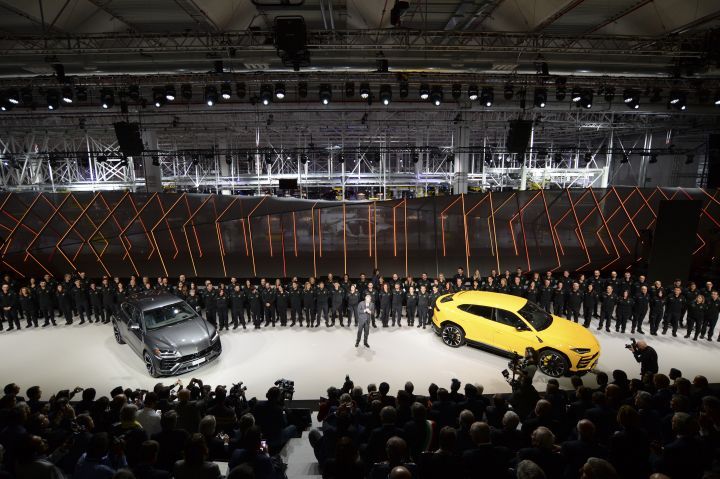 The supercar greats often have to tread lightly. Any change or new introduction walks a fine line between superlative and sacrilege. We saw this happen when the very idea of the Urus was presented in 2012. “A Lamborghini SUV?! Bah!” exclaimed one self-proclaimed purist. “Surely this attempt to increase sales will dilute the brand,” stated another. This is a familiar scenario from when Porsche introduced the Cayenne and we’re yet to see any regret.

But the concerns around the Urus aren’t entirely unfounded. For before the word Urus, comes Lamborghini. A name that’s embodied excitement. A name that’s about doing things that are over the top. A name that’s synonymous with the term supercar and was, quite literally, created as an act of revenge. So does the Urus have that spirit? Is it a true Lamborghini with some sensibility thrown into the mix, or merely something sensible that happens to wear that raging bull on its nose?

One look at the Urus (though, it won’t stop at that) and all you can say is, they sure are off to the right start. A lot of comments called the SUV a “hopped up Huracan” and you can definitely see traces of that across the design. But what’s Lamborghini about the design isn’t the aggressive face, the enormous front vents or the fact that it rides on 23-inch wheels.

It’s not even the sharp cuts and lines on the side profile, the frameless doors or even the tail light that draws inspiration from the Veneno, Centenario and Asterion. What’s Lamborghini here is that this, the production-ready Urus, looks wilder, louder and madder than the concept car it’s based on. They’ve reversed the natural order of car design! Just look at the aggressive contours at the rear or the quad-tail pipes which make the rear more imposing than the front. It looks like you have to ask the Urus for permission before loading up the boot or it’ll bite you.

And yet, even with its 5-metre+ length, the Urus looks athletic. Buff enough to command serious road presence, but sharp enough to look sprint ready.

It’s an odd feeling, having to climb into a Lamborghini. From the driver’s perch, you’re looking down upon other road users, but this time, the expression isn’t just figurative, but literal too. The cabin welcomes you with a whacky mix of hexagons and octagons; shapes that take form in the AC vents, cup holders, horn pad, instrument cluster and even the screen graphics. Speaking of which, we can’t say with absolute certainty if an actual jet has screens like this, but a childhood enriched by Swat Kats has us convinced that this is what a cockpit feels like.

The graphics and animations do exactly what a supercar should - make you feel like a child joyfully squealing. Be it the instrument cluster or the dual centre screens, they all have a sense of occasion when you use them. But before you accuse of swooning because it’s a Lambo, a reminder that we aren’t disconnected with reality.

Yes, there are many bits here that make the Urus feel less bespoke. The dual centre screens are from the new Audi A8. Its steering wheel feels familiar to grip if you’ve been in the Audi RS5, while the steering buttons and instrument cluster’s layout are similar to what we’ve seen even in the Audi A4. The fact is, you don’t have to look hard to see where Ingolstadt has entered Sant’Agata Bolognese.

Forgivable, of course, because that doesn’t change the fact that the cabin is still very Lambo. Just look at those jet thruster-like Anima and Ego drive mode selectors! If you wanted a cabin that makes you feel like a stupidly excited kid, the Urus delivers. And as the cabin turns you into a toddler, the one thing you can’t wait to do is lift the red lid and press the pretty button!

Everytime you open up the brochure of one these fancy cars, you have a heap of facts, figures and tech specs thrown into your face. So let’s get that out of the way first. For the first time in a Lamborghini, the Urus is powered by, not a V10 or V12, but a twin-turbocharged, 4.0-litre V8. It isn’t mid-engined but sits ahead of you, under the bonnet, like in a regular car!

Power? 650PS! Torque? 850Nm! Transmission? An 8-speed automatic gearbox that transmits power to all four wheels. The result, a claimed 0-100kmph time of 3.6 seconds! That’s Aston Martin Vantage territory and not much slower than even the Huracan. But c'mon, these are just tall claims on paper. There’s no way this can hold up in the real world, right? Except that once you pin the throttle, the G-force is sure to throw your scepticism into the back seat.

The Urus has no business feeling as quick as it does. Weighing in at 2.2 tons, you’d expect it to feel burdened but it just doesn’t. Find an open stretch of road or even a gap that’s wide enough, watch as the gearbox clicks down and brace for the simply ballistic surge in acceleration. You really need to focus while driving the Urus. The performance is just as immediate and impatient as you’d want it to be. The powertrain isn’t battling the weight or typical SUV aero limitations to get the Urus moving and then make the drive exhilarating. It’s savagery from the second you poke the throttle by an inch or two.

Of course, since this is a road review, it isn’t possible to see if it’ll hit its claimed top speed of 305kmph (making it the fastest SUV in the world), but it takes a mere few kilometres to make you believe that she’s capable and willing. At a 120kmph, the Urus is sleepwalking and the faster you go, the more this bull wants to be pushed. On the Mumbai-Pune expressway, cars in the distance aren’t so much caught up to as they are zoomed into.

Backing up all this madness is the exhaust note. It screams loud enough to let everyone know your driving something mad. You don’t get the blare of a V10 or the wail of a V12 but it sounds angry. High gear low-speed acceleration in traffic even gets you the beloved dirty gargle of a V8. It’s audible in Strada, louder in Sport and menacing in Corsa. It’s not the rawest sounding V8 (a la G-Wagen) but you aren’t insulated from the experience either.

But let’s be honest, if you want straight line excitement, American muscle will do that. Why pay supercar money for that? Well, you do once you factor in handling. And again, the last body style that comes to mind when you think of handling, is SUV.

Based on some quick impressions, though, all the gizmodry of adaptive air suspension and torque vectoring works. Take a hard corner and Urus feels tight and quick. The tyres grip with a vengeance and you can hold some really sharp lines without dialling in too much steering. It’s also eery how it counters body roll. On Pune’s Oxford Golf Course road, you’re welcomed by a series of hairpin bends, and as we went through them, the Urus always felt car like. With the tall driving position, you even get an extra dose of confidence since corners aren’t as blind as they’d be in a thoroughbred supercar.

The steering is very quick and responsive but it is a bit, umm, Audi. In that, you get a good feel and great responsiveness, but you’re very aware of the electronic assistance in the process. You get the result you want but it’s not as unfiltered as you’d want it.

But you do get the bragging rights of not just driving a Lambo but getting tech from the flagship. Like the Aventador, the Urus gets rear wheel steering, which must’ve played a role in making the quickly snaking bends tighter. We say “must’ve” because you can’t actually tell if the system has activated. It all feels very natural in action. At low speeds, the rear wheels turn in the opposite direction as the front to make turn ins quicker, while at high speeds, they turn in the same direction as the front wheels to offer better stability.

Yes, once you’re done pushing the bull, you can take it grazing. The steering, for example, is light and easy to use in the city. Throttle response isn’t antsy either. When you just want to take the kids for a school run, it’s relaxed and predictable. The transmission isn’t jerky while shifting cogs and the exhaust isn’t bellowing all the time. Take things slow and you find it’s super refined and even quiet. With 158mm-248mm of ground clearance, it’ll even ferry the family through our dreaded speed breakers or make the weekend trip to one of your many farmhouses.

A major surprise, though, is the ride. While our drive took the Urus through mostly well-paved roads, a few rough patches showed that even with the optional 23-inch wheels, it’s comfortable. The ride isn’t jittery or too stiff, even in Sport mode. That said, potholes will still have to be taken with care and this isn’t a machine for roughhousing.

Driving this, you’re also reminded that the Urus is a supersport UV, not a luxo barge. The damping works well over most roads but it’s not out-and-out plush. Small imperfections will filter into the cabin, reminding you that the Urus knows where its priorities lie. And that’s a good thing because it’s exactly why the Urus is different from its similarly priced alternatives.

Even the rear seat is excellent. There’s adequate space for a 6-footer to sit behind another and you get creature comforts like an armrest with cupholders, rear climate control and two 12V power socket. But unlike, say, a Range Rover Sport SVR, the Urus feels like a sportscar adapted for usability, not a luxury car that’s been given sporting pedigree. The tall window line and sloping roof remind you that this is no lounge and the Urus’ pleasure lies in the driver’s seat.

That said, this SUV scores big on practicality. The 616-litre boot makes it weekend road trip-friendly. It’s great to have the family, you and the luggage all in one place! After all, coming together and asking everyone else on the road to kindly eat your dust makes for a great bonding activity.

Let’s cut to the chase. Supercars are no longer unusable, even in a country like India. Yes, even the more hardcore Huracan can be driven on most urban roads. The supercar experience itself has been made more approachable and what the Urus does is take that user-friendliness further. Something Lamborghini wasn’t able to do with the LM002.

It shares a lot with other Volkswagen AG brands, yes, but doesn’t miss out on feeling distinctively Lambo. Because for all its sensibilities, it has the wild DNA to make it worthy of the badge it wears. Lamborghini’s expectation of doubling its sales in India with this Rs 3 crore (ex-showroom) SUV seems very realistic.

View All
All Upcoming Lamborghini Cars