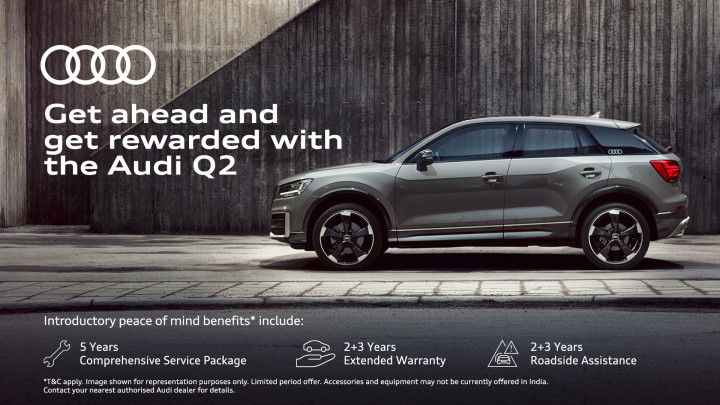 Audi India finally has some good news regarding the launch of the Q2, with bookings now underway at a token amount of Rs 2 lakh. Audi is offering a 5-year comprehensive service package as part of the Q2’s introductory offers.

The carmaker's most-affordable SUV in India will be based on the pre-facelift model which is not as disappointing as it sounds. Keep in mind, the facelifted Q2 was recently unveiled in Europe. It gets a bunch of funky colour options, LED lighting, and the trademark Audi grille. The Q2’s interior might remind you of the older A3 with a swivel wheel for the infotainment system, instead of the touch-sensitive controls seen on newer models.

As for the features, it is expected to get Audi’s Virtual Cockpit, Android Auto and Apple CarPlay, ambient lighting, digital instrument display, multi-functional steering wheel, cruise control, and park assist. Onboard safety features include ABS with EBD, front and rear parking sensors, and electronic stability program.

Under the hood, the Q2 will be powered by the 2.0-litre TFSI petrol engine. It will produce around 190PS and 320Nm with the drive sent to all four wheels thanks to Audi’s quattro system, likely via a 7-speed dual-clutch automatic gearbox. What we do know is that the Q2 will go from 0-100 kmph in 6.5 seconds!

Since bookings for the SUV are now open, we can expect the Q2 to be launched in the coming weeks of October. It is expected to be priced between Rs 30 lakh and Rs 40 lakh. The Q2 will be Audi’s fifth launch this year after the A8, A8L, RS7 and RS Q8. It will go up against the likes of the Mercedes-Benz GLA, BMW X1 and Volvo XC40.