How does the Yamaha R15 V3.0 and the Aprilia RS 150 stack up against the veteran, the Bajaj Pulsar RS200, on paper? We find out 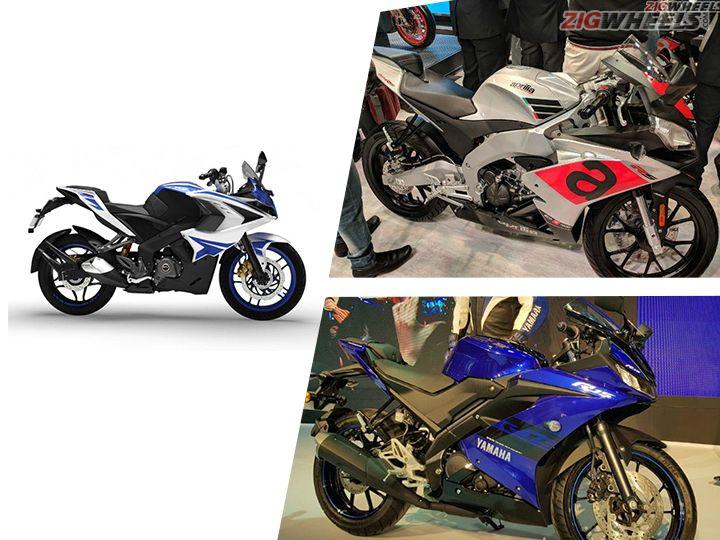 This year’s Auto Expo saw the eagerly awaited Indian unveil of the Yamaha R15 V3.0 and a surprising debut in the form of the Aprilia RS 150. These two motorcycles are set for a fierce battle in the entry-level sportbike segment in the upcoming months. But how do they stack up against the existing competition, the Bajaj Pulsar RS200? To find out, we pit them against each other, on paper.

Powering the latest iteration in the Yamaha R15 family is a 155cc, single-cylinder, liquid-cooled engine. It is a bored out version of the older mill, which now features a 58mm bore, 58.7mm stroke and variable valve actuation (VVA). This has helped in achieving a power bump of 2.3PS, now producing 19.3PS at 10,000rpm. The torque figures remain unchanged: 14.7Nm at 8500rpm. Power is transmitted via a 6-speed gearbox. The company even claims a 4.7 per cent bump in mileage figures. However, we will soon put these claims to test in our review.

The Bajaj RS200, on the other hand, packs a 199.5, single-cylinder, liquid-cooled, fuel-injected powerplant, which delivers 24.4PS of power at 9500rpm and 18.6Nm of torque at 8000rpm. Power is transmitted to the rear wheel via a six-speed gearbox.

The Yamaha R15 V3.0 ditches the semi-digital instrument console of the V2.0 for a fully digital one. It showcases necessary information such as tripmeter, odometer, fuel range, service reminder and more. Along with it, the bike also comes with a slipper clutch, twin LED headlamps and clip-on handlebars. However, ABS has been given a miss here, even as an optional extra, which we feel is a big letdown.

The Aprilia RS 150 gets a semi-digital instrument console with the digital LCD display on the right and the tachometer on the left. It gets a halogen-lit tri-headlamp setup whereas the tail lamp gets an LED unit. Other features include clip-on handlebars, optional quickshifter and dual-channel ABS unit.

In terms of features, the Bajaj Pulsar RS200 gets a semi-digital instrument console, twin projector headlamps with LED DRLs and an LED tail lamp, along with optional single-channel ABS. However, unlike its competitors, the RS200 misses out on a slipper clutch.

The legendary Deltabox frame has been carried forward on the latest R15 as well. However, it still misses out on the premium USD forks available on the international variant. Instead, we get conventional telescopic forks at the front and a monoshock unit at the rear. Braking duties here are handled by a 282mm disc brake at the front and a 220mm disc at the back. Other misses include IRC tyres, replaced by MRF Zappers for the Indian-spec model (front 110/80 - 17 and rear 140/70 -17). Not only does the V3.0's saddle now sits higher at 815mm (increase of 15mm), it is also heavier by 3kg at 139kg (kerb).

The Aprilia RS 150 gets a perimeter frame and an aluminium swingarm. Suspension duties here are handled by 40mm upside down forks with 110mm of travel and a monoshock unit with 130mm of travel. Braking here is done via a 300mm front disc with a radially mounted four-piston calliper and a 218mm disc at the rear. Both sport steel-braided brake lines. Its 17-inch wheels are shod with front 100/80-section and rear 130/70-sections radial tyres. With the premium underpinnings and an aggressive riding position, we expect the RS 150 be a blast on the track.

Aprilia is yet to launch the RS 150 but with the bike confirmed for India, we expect it to be priced at around Rs 1.5 lakh (all ex-showroom Delhi).

On paper, the Aprilia RS 150 might look like a clear winner here, but with its pricing shrouded in mystery at the moment, the Yamaha R15 V3.0 takes the crown for now. However, the Bajaj Pulsar RS200 too makes a good case for itself, despite sadly missing out on features like a slipper clutch or even an optional quickshifter.

This makes it seem more dated and put it at a disadvantage against its rivals. Unless it’s the additional burst of power you are looking for, which is the only reason why the RS 200 has a winning chance over the two.