How has the R15 grown up or changed in its fourth generation? 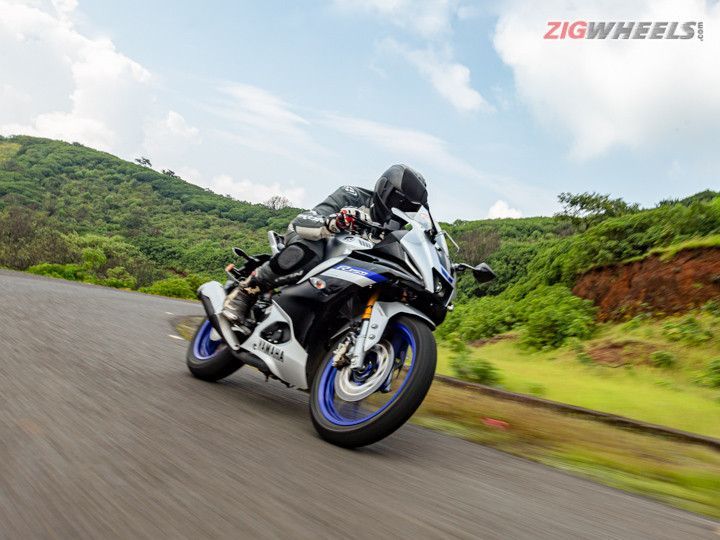 What lies behind Yamaha’s R15 iconic status? While its performance, styling and handling can be credited with its appeal, at the heart of it, it’s been the R15’s ability to turn boys to men and men into boys. Rock solid ability that flatters and bolsters coupled with puppy-dog-eagerness, the R15 moved every rider. Now, launched in 2021 the R15 V4 is adding more tech, bringing a global family look albeit at a heavier price tag. So, does it build on the R15 legacy or coast along on it? We tackle a few key questions to get to the answer.

Q1. Does the V4 justify the extra money charged over the V3?
At the time of launch the base V4 costs about Rs 10,000 more than the R15 V3 which it replaces. The R15 V4 brings new kit to the table too, like upside-down forks from KYB, traction control, a feature-packed instrument cluster with bluetooth connectivity and a brighter LED headlamp. So, the extra cash the R15 V4 demands is more than justified. What makes it even more deserving of the price tag is the massive improvement in plastic quality and fit and finish. While the V3 felt flimsy and tacky, the V4 feels like a Yamaha should. However, Yamaha could have offered beefier levers with span adjustment for better feel.

Q2. But should you stretch for the R15M variant?
The difference between the most affordable and the most expensive R15 variants is about Rs 12,000. In the middle of this range sits the Racing Blue variant which packs a quickshifter, just like the more expensive M variants. But our recommendation would be to go for the M versions because they look immediately “new” with colours and graphics that make the new R7-inspired design really standout. For the additional Rs 5000 you get gold-painted calipers, special badges, and blue fork caps which will make you feel special every time you get on the bike. Aside from this the M variants also get a special seat fabric, and grey treatment for the swingarm and exhaust.

Q3. Is it good for touring?
At nearly 2 lakh rupees, it is likely that the R15 will be the only bike most buyers will have in their garage, so whether it manages to tour comfortably might not be critical, but it is important. In this regard there is one notable improvement: the headlamp. The new Class D LED headlamp is bright and has a good throw too, and thus allowed us to carry a good pace even on unlit roads. Secondly, Yamaha have reworked the fairing to make it more slippery in the wind, dropping the drag coefficient to 0.293 from 0.307. In our experience, the R15 V4 provided adequate wind protection for my 5’6” frame even at triple digit speeds. Lastly, there’s the improved comfort. More on that in the next question.

Q4. Is it more comfortable?
While the V4 looks different, its dimensions, including the seat height and wheelbase, are identical to the V3. So, unsurprisingly, pillion comfort is unchanged as the lower position for the stepped seat is maintained here too. However, the rider will be more comfortable here. The clip-on bars are positioned slightly higher and are now angled flatter, giving you a more relaxed seating posture which will prove valuable for everyday use and for longer rides.

Q5. Does it feel more fun?
The V4 takes the R15’s handling legacy and dials it up to eleven. Again. It is incredible just how intuitive, light and adjustable the V4 is while also offering an even higher level of confidence and security. When riding hard the new KYB forks will allow you to brake later, turn harder and exploit even more pace--and that’s despite the front tyre still not being upgraded to a radial. Nonetheless, you will be able to carry greater corner speed with confidence. Being able to hug, scooch and hang off the R15 even more intimately and smoothly helps too, all thanks to the new handlebar position and the resculpted tank.

But as you go faster you’ll wish that the R15 had radial calipers as brake feel is a bit mushy. Don’t dismiss its old-school hardware though, as braking distance is impressive. In our tests it stopped from 100kmph in just under fifty-four metres. The KTM RC 125 does the same in 57.57 metres. Aside from the smooth acting ABS the R15 has one more safety net that will help keep the fun going for longer.

Q6. Do you need traction control on an 18PS motorcycle?
Need? No. The R15 just doesn’t make the kind of torque or power that necessitates a traction control system. However, triggering TC intervention isn’t going to be easy. We found the TC kicking in when starting off on loose surfaces. Even then, the system allows for a fair amount of slip before cutting power. As it doesn’t intrude into your ride very often, and when it does, it isn’t ham-fisted about it; the traction control system feels pretty invisible. So, should you meet a patch of sand or oil unprepared, this additional safety net gives you a bigger cushion to react appropriately. As a standard, no-cost feature the TC is a welcome addition.

Q7. Is the quickshifter good? For commuting?
Ermm. Considering that most R15s live on city streets and not the racetrack the second part of the question is relevant too. To make it easy to use, the QS sign pops up on the instrument cluster to let you know that the quickshifter-supplemented upshifts have been enabled. This happens when the vehicle speed hits 20 kmph, the engine rpm passes 2,000rpm, and the throttle is open. So you could use it often.

What makes it truly addictive is that the quickshifter works beautifully. This high-spec potentiometer-based system interrupts the fuel supply and spark when needed to make upshifts. Although you can feel a slight “bump” when you upshift at low speeds, the shifts are practically seamless at high speeds, giving the R15 that M1 vibe. You will quickly end up using the quickshifter for all upshifts and just the right-timed blips on the throttle can give you clutchless downshifts too. Shh. The quickshifter is a valuable tool in the Yamaha’s toolbox to help it in the performance arena. Yes, next question.

Q8. Is the performance better?
The R15 still feels just as involving and exciting to ride. The VVA lets the V4 rev easily upwards of 7400rpm, which lets this little motorcycle get to the triple digit mark without much hassle. We even saw an indicated 129kmph while testing! Also, the power delivery feels like one clean sweep now right from low revs as under 4000rpm the motor feels less urgent than before. The usability is still impressive as the R15 can pull from under 20kmph even in 5th gear. So, the city and traffic skills of the R15 are still strong.

However, there is the slightest drop in power between the R15 versions from 18.6PS to 18.4PS. Torque on the other hand has been massaged a bit to 14.2Nm from 14.1Nm, but more importantly it is made at 7200rpm instead of 8500rpm. Despite the quickshifter, the 13.25s time taken to go from 0-100kmph is more than the BS4 era. For far less money the Bajaj Pulsar NS200 offers you better performance (11.68s). But when compared to the 18.24s time of the RC 125, you realise the R15 is striking an impressive balance, especially when you consider that Rs 1.8 lakh asking price for the less powerful KTM is as much as the most premium R15!

Verdict
So on paper the R15 V4 lack of performance gains and the higher price can trip you up. While the price hike is justified, why has the R15 not been bumped up to a R18 or an R2? Today it feels that the Deltabox chassis is shouldering even more weight of the R15’s legacy than before. But, the engine, by sticking to its proven suite of abilities - everyday usability, unintimidating but exciting performance, and low ownership costs, the Yamaha stays close to the needs of the boys that it will groom into men. As for the men, they will appreciate the new layers of sophistication that polish the Yamaha’s handling abilities to a dazzling sheen, making it even more enjoyable and forgiving. So, the Yamaha R15 is more appealing and more capable than before, and despite the higher price tag still very worthy of being the first sportbike for the budding biker. 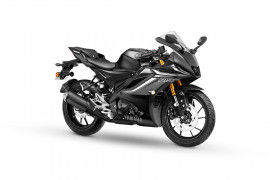 All Comparisons of R15 V4